Malaysian Prime Minister, Abdullah Badawi, unwittingly had more than 50 activists at Eid'ul Fitri celebrations at the Putra World Trade Centre on October 1st. About twenty of these were bloggers, led by blogger and lawyer, Haris Ibrahim, who wanted to personally tell the Prime Minister they wanted the Internal Security Act (ISA) repealed, and that all detainees, including Raja Petra Kamaruddin (RPK), be released. 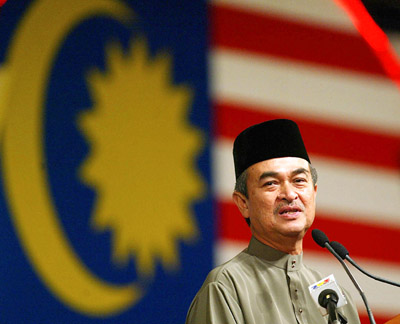 They wore wore T-shirts bearing ‘No to ISA’ and ‘Free RPK’ in reference to the two-year ISA detention of Raja Petra Kamaruddin (RPK). PM Abdullah was reported to have been visibly amused at this turn of events, and was said to have been smiling as he shook hands and exchanged small talk with the activists. The bloggers were followed by protesters from Hindu Rights Action Force (Hindraf), who also called for  the abolition of the ISA and the freeing of its members who are in detention.

The ISA, a piece of legislation said to be for countering terrorism and communism in the 1960s, has been used by the authorities to suppress dissension in recent times, including the recent detentions without trial of blogger RPK, opposition MP Teresa Kok and Sin Chew newspaper journalist, Tan Hoon Cheng. Protests from the public has followed, leading to Kok and Tan's release. The minister in charge of the legal affairs portfolio made a principled stand by resigning from his position and writing an open letter on the (mis)use of the legislation.

RPK, on the other hand, has had his six month detention extended to two years. On Sept 30th, RPK's lawyers filed a second habeas corpus application at the Kuala Lumpur High Court. RPK's wife, Marina Lee Abdullah, was reported to have said,

This application is totally different from the first one… Whereas the first detention order meant he would be detained for up to 60 days, the second said he can be detained in there for life.

Meanwhile, RPK has managed to write another post to his blog while in detention. He writes:

I am what they call under orientation.  This three months’ orientation I suppose is to get me used to the 2 years I am going to spend here… Today, my liberty is at the top of my priority list.  But I know it shall not come soon and it shall not come easy and it shall only come if there is a change of government and if the new government fulfills its promise to abolish the ISA.

At this point in time, the status of whether or not there will be new government, or new leaders within the current government, is uncertain.