The Burmese Army has filed charges against farmers who had lodged a complaint with the International Labour Organisation (ILO) against the Central Ordinance Depot on the 3rd August after 5,000 acres of land was seized.

The Military spokesperson Captain Phyo Wei Lin “accused the defendants of sending news and facts to the foreign media”, according to Mizzima News.

Three villagers arrested on the 20th October were later prosecuted under the Electronic Law after the initial case was brought under the Official Secrets Act. This was later changed after the Military realised the preposterous nature of charging the farmers for “making a photograph of an Army establishment.”

The Electronic Law has been used by the Junta to prosecute and persecute activists, bloggers and politicians who are critical of the regime.

The ILO has long cited Burma as a country using forced labour and murdering workers unwilling to work.

Burma has clamped down on all forms of electronic activities since the ‘Saffron Revolution” last year when Monks all over the country protested against the Military Regime. The protests and the subsequent brutal suppression was broadcast all over the world via the internet, bringing international condemnation and great scrutiny on the activities of the Junta. 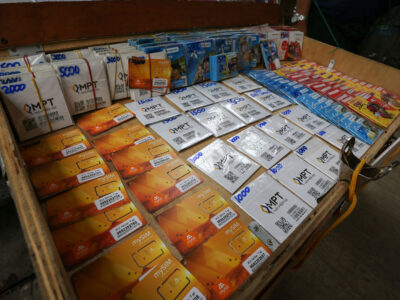