Over the course of the past week, I've gotten reports from a number of people whose personal Facebook pages have been removed or deleted from the Facebook platform. At first, it was a male friend in Morocco. Then a female, Moroccan friend in Boston. Then an Indian woman in the UK. And then even more.

Once I investigated a bit further and spoke to each of them, I discovered what each of them have in common: All of them are critical of Islam (some are atheists, others ex-Muslims, still others reformers) and post frequently articles and status updates about the religion.

And then someone told me that a group was created on Facebook (in Arabic) for the sole purpose of reporting, and thus having removed, Facebook profiles of atheist Arabs. The group, which appears to have also been removed, was entitled “Facebook pesticide” and its sole purpose was to “identity Atheists / Agnostic / anti-religion in the Arab world and specifically in Tunisia …” Once identified, the group members would then attempt to report such users.

Of course it's problematic that there's a group of people seeking to destroy the online identities of users of a certain group, but that's not the issue I'm going to address in this blog post. Instead, I will address why Facebook's strategy toward dealing with situations like this is so problematic: 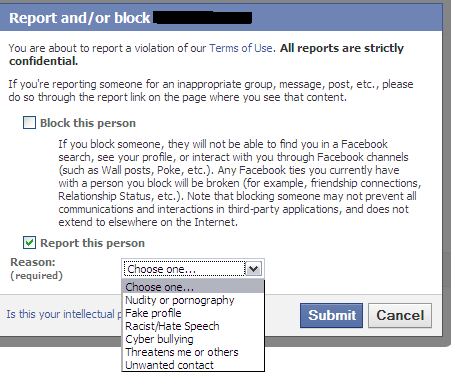 A screenshot of Facebook's "report" function

The rest of this I've written about here. Effectively, the problem is this: For activists, Facebook's terms of service are simply not clear enough, and its methods for profile removal and reinstatement not transparent.