Italy: NO to Restrictions on Online Free Speech

While the recent WikiLeaks experience [EN] reveals aspirations to build “information freedom zones” with some help from Iceland [EN], the Italian government seems to be heading in the opposite direction.

A Media and Wiretapping Bill [EN] that was under consideration by the Italian parliament for two years (harshly criticized by the United Nations) [all links in Italian from here] would have introduced a “gag rule” by restricting journalists from publishing wiretapping records during investigations, possibly in the public interest. Thanks to sustained protest by citizens and journalists, these restrictions were formally removed from the text of the bill on July 21. Yet somehow the new version still includes a small clause aimed at directly restricting online free speech,the so-called “blog-killing” provision (par. 29 of art. 1). As the group blog MAVAFFANCULP explains it:

One of the proposed provisions is specifically aimed at the online world and it is not clear what this has to do with wiretaps. It would become mandatory for any blog to rectify within 48 hours any news or articles that might contain incorrect information.

Basically, if the law is approved like it is now, all bloggers are required to promptly fix any requested correction or be fined up to 12,500 Euros. No way that we can even take a short vacation! Obviously this will force many sites to make a drastic choice. Either to close down entirely or stop dealing with issues about which powerful people, and their aggressive lawyers, are particularly sensitive.

Once again, people are voicing their discontent on the Net and on the streets. The web-community Valigia Blu coordinated most of the activity in the last weeks, including a large rally scheduled for Thursday July 29 at 4pm, in Piazza Montecitorio, in downtown Rome, to mark the beginning of the final bill discussion on the Parliament floor. In the meantime people are encouraged to sign a letter to MPs in order to “reopen the debate and par. 29 of art.1″: it has been signed by over 11,000 citizens so far, along with other 240,000 signatures gathered during the previous rally held in Rome on July 1st – see picture on the left, from the Valigia Blu photostream on Flickr.

Many self-produced videos are circulating on YouTube, including the following video by nikilnero.

Information is also spread via Twitter under the hashtag #nobavaglio: 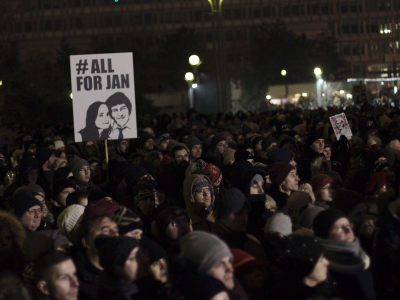