Global Voices Advocacy's Netizen Report offers an international snapshot of challenges, victories, and emerging trends in Internet rights around the world. This week's report begins in the UK, where the Investigatory Powers Tribunal ruled on February 6 that regulations covering Britain’s bulk interception of data were in breach of human rights law until last year. That means aspects of the intelligence agency GCHQ’s surveillance program were illegal for a period of seven years.

This was a big win for the two NGOs that filed the challenge before the tribunal (London’s Privacy International and the Pakistan-based Bytes for All), and for the broader human rights advocacy community. The judges found that the agency had “contravened” privacy and free expression provisions in the European Convention on Human Rights, and that the U.K. government failed in making the laws governing the program publicly available and clear enough to provide “adequate protection against arbitrary interference.” This marks the first time in its 15-year history that the IPT has upheld a complaint against any intelligence agency.

Privacy International is now launching an initiative to help “potentially millions” of people request that their data be permanently deleted from GCHQ records.

Iraqi judiciary spokesman AbdelSater El Bayrakdar announced libel and insult on Facebook are now punishable for up to one year in jail and a fine. According to an anonymous source, escalating fights among political parties and sects online may have led to the new policy in an attempt to reduce social tension.

Netflix announced on Monday that “people in Cuba with Internet connections and access to international payment methods will be able to subscribe to Netflix and instantly watch a curated selection of popular movies and TV shows.” Statements from the company reflected no recognition of the fact that less than one percent of Cubans have at-home Internet connections, and that most Internet service in the country is not robust enough to support streaming or video downloads. Apart from this, credit cards (i.e. “international payment methods”) are all but nonexistent on the island.

“We need to be careful even of what we think”: Self-Censorship in Venezuela

There is no coherent policy for online content regulation in Venezuela. Instead, there are waves of detentions and online censorship. Myriad websites have been blocked on and off by the government since 2007, sometimes officially through the telecommunications commission, other times indirectly through CANTV, the state-owned ISP that controls at least 80% of the national market. Not once in the case of any of  these blockages, some of which persist, was a trial conducted.

China continues to tighten its control over online discourse. This week it announced that bloggers and chatroom users will be required to register their real names and promise in writing they will “avoid challenging the Communist political system,” according to the Associated Press.

Samsung’s new smart TV that watches you back

If you’re watching television on Samsung’s new smart TV, the TV is probably watching you back. The device listens in to conversations that happen in its vicinity and may share that data with Samsung or third parties. Samsung says it does not retain voice data or sell the audio being captured, however a third party firm named Nuance translates the speech collected into text for the purpose of searching for requested content and delivering it to the TV.

Transparency reports hot off the presses in Korea, US

South Korean Web portal service company Daum Kakao released its first transparency report, making it the first Internet service company in South Korea that has ever released a report about user information requests made by the South Korean government. The numbers are staggering: It processed a total of 492,502 requests for communications data affecting 6,024,935 accounts in the first half of 2014 alone, along with requests to monitor telecommunications data on 3,995 accounts.

Twitter released its third transparency report this week, noting it has observed a 40 percent increase in government requests for Twitter account information and an 84 percent increase in government requests for content removal. The United States made the largest number of requests worldwide (affecting 5,217 accounts), followed by Turkey (affecting 523 accounts). Next in line was Russia, which had never submitted formal requests for user data to Twitter until the second half of 2014, when it made 108 requests ranging from “promotion of illegal drugs to attempts to suppress non-violent demonstrations.” The report continues:

While we had a compliance rate of 13 percent, we denied several requests to silence popular critics of the Russian government and other demands to limit speech about non-violent demonstrations in Ukraine.

The White House announced plans to launch a centralized cybersecurity agency as part of its response to the Sony Pictures hack. The Cyber Threat Intelligence Integration Center will gather and analyze intelligence from the FBI, NSA, and CIA, and will work with a budget of $35 million. According to former National Counterterrorism Center director Matthew Olsen, collecting data from the private sector will be central to the agency’s work. Through what means they will do this remains unclear, as is how they plan to balance the agency’s efforts with user privacy rights. 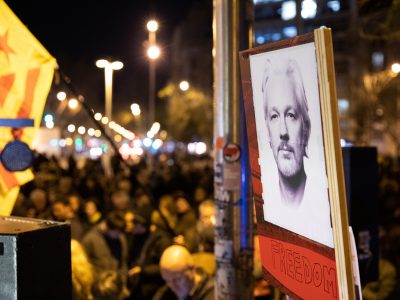