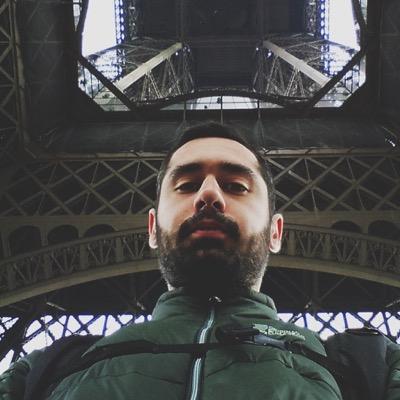 Arash Zad is said to have been arrested in late July while trying to board a flight from Tehran to Istanbul. Image from Zad's Twitter account.

In early September 2015, Iranian bloggers and member's of the Iranian technology community noticed that prominent Iranian tech blogger Arash Zad seemed to be missing from cyberspace. They soon learned from his family and friends in Iran that Zad had been under arrest since the end of July when he was detained by the Revolutionary Guard's intelligence units.

Was wondering why @arashzd has not tweeted for more than a month. Just found out that he is arrested :( No reason given #Iran #filternet yet

The news of Zad's incarceration explained phishing emails sent from his email account to many of his contacts at the beginning of August now understood to be the period of his incarceration. While not known to him at the time, Internet researcher Nariman Gharib received one such email on 2 August. Although not certain, it is possible these attacks originated from the Revolutionary Guards intelligence units.

At the time of his incarceration, a lot of people noticed phishing attempts from his email. A lot of folks started asking me instead of Arash. 1/2

At the time these conversations and texts were sent for many, one of the only ones who successfully received a phishing attempt was me. 2/2

Who is Arash Zad?

Arash Zad is associated with Iran's start-up and blogging scenes, credited with being a pioneer innovator as a tech entrepreneur inside Iran. He first rose to prominence within the Iranian blogosphere with his blog Weblogina, where he wrote about technology, Iran's IT culture, and start-ups.

The company relocated to Istanbul from Tehran, in order to take advantage of the “ease of global commerce” available there. Zad is also one of the core members of the volunteer moderator team for Farsi translations on Twitter.

Why is it that someone whose work has been crucial to start-up work, blogging, and in general has been very helpful towards many within Persian-speaking cyberspace is now under arrest?! Only god knows.

Zad's work has been well received by Iranians inside and outside of the country, especially in his efforts to help many others within the field. He has kept a distance from politics, hemming close to an industry marked by all factions of the Iranian government for economic development.

In September 2012, the state-run IRIB Education channel Shabakaye Amoozesh Sima featured Zad in an interview on their technology show Barkhat (“Online”). In the interview Zad explained the content of his blog Weblogina, and his interest in blogging about IT culture for Iranians. Prior to his arrest, he was slated to launch a new project aimed to educate elderly Iranians on how to use new and secure communications tools. One of the last things he posted on his wall prior to his arrest was about his intention to go back to Istanbul to initiate this project.

Although I have gloriously returned to Tehran I have to leave for my own country tonight and from noon tomorrow I will begin marathon work on my latest project. Damn the time limitation.

Attendance at iBridges and his international connections

In June 2015, Zad attended iBridges in Berlin, one of the largest conferences to bring together members of the start-up, IT, government and investment communities inside of Iran, alongside members of the Iranian diaspora and non-Iranians from the entrepreneurial world. The conference is seen as a milestone in bridging the divide between the start-up world in the West and the emerging scene inside of Iran.

Zad was known to frequently travel between Istanbul and Tehran; however, this was his first trip following his participation in that international conference. The conference was set a few weeks before the historic nuclear agreement between Iran and the P5+1 in Vienna, which would work to integrate Iran back into the international fora, not only in terms of international relations, but also in economy and international cooperation in business, especially in the country's emerging tech industry.

The timing of Zad's arrest in the midst of a climate of greater opening and collaboration with the West is puzzling to some. In a statement to Iranwire, a former colleague of Zad's explained:

Arash frequently travelled to Iran. He participated in international conferences including iBRIDGES in Berlin in June 2015. His projects were not problematic in themselves, but it is likely that the contacts and connections he has made led to his arrest.

The details of Zad's arrest remain unclear. It has thus far been recognized as an arbitrary arrest by various human rights organisations. Those close to Zad and his family have been reluctant to speak or publicize the case for fear of compromising his release; however, a number of his friends have already spoken under conditions of anonymity. While the story is now public, with media such as IranWire, and advocacy organisations such as Reporters Without Borders and Article 19 highlighting his case, Zad's family have continued their silence.

Zad's arrest comes at a time of great tension around Internet policy and regulation in Iran. While the current administration of President Hassan Rouhani has advocated for more Internet freedom and development in the field of IT, there seems to be a counterbalancing effect by both the Supreme Leader Ayatollah Khamenei, as well a hardline factions such as the Revolutionary Guards.

In a statement about the achievements of his administration, President Rouhani explained the following on the US television news program 60 Minutes:

I think relative to the two years I've been in office, I have been successful – not 100 percent of course, but successful. Our relations with other countries have improved. There is more freedom at the universities, lively debates and greater freedom of the press, compared to the past.

Recent reports of increasing power in Khamenei's hardline Supreme Council of Cyberspace and the launch of the Guard's surveillance program, known as Spider, speak to efforts to stifle freedom online for Iranians.

Addressing the lack of improvement regarding human rights, Rouhani elaborated, “Of course, there are some issues that are not in control of the government. Two of those issues are human rights and personal freedoms [that] are in the domain of Iran's conservative judicial system.”

Former Global Voices editor and Radio Farda online editor-in-chief Fred Petrossian put it like this: “While some factions within the regime welcome openness to foreign conferences, there are others which want to create an atmosphere of fear.”

Amin Sabeti, an Iranian Internet researcher who follows cases of arrests of netizens inside Iran closely, told Global Voices he saw Zad's arrest as a way for the Revolutionary Guards to set a precedent for other technologists and bloggers in the new climate of open foreign investments.

I think it can be a strong signal from the IRGC (Revolutionary Guards), especially to the startup ecosystem, warning them not to be too excited about foreign investments. As far as I know, Arash is one of the rare Iranian entrepreneurs who has a company outside the country and travels to Iran frequently. This might be the main reason for his arrest, although no one knows what has happened even after two months following his arrest.

Indeed, this arrest, alongside the numerous detentions of bloggers and social media users for their opinions within the past year, is meant to chill free expression online inside Iran. This is not the first time a technologist and blogger, with no particular political agenda, has been persecuted in Iran. In 2013, the technology bloggers known as Narenji were similarly arrested for arbitrary reasons that many associated with their connections to Western organisations.

For now, free speech and advocacy campaigns can only speculate on Zad's case. Petrossian elaborated, “Unfortunately because there is very little or no transparency in Iranian judiciary, we are left to speculate why netizens like Arash get arrested.”

Timeline: Arash's social media posts before and after his arrest

Zad kept an almost daily update of his life and activities on his Twitter account, which has over 17,000 followers. While in Iran, he updated his account right up until the hours prior to his arrest at Iman Khomeini Airport, when he tried to take a flight back to his home in Istanbul.

Iranian money doesn't fit in my wallet. I mean, the West has made its plans for our youth like this.

Zad tweets about meeting a wealthy friend who sends car to pick him up. He thinks about living in Iran again, but determines that it's only possible to live comfortably if you receive an income in dollars.

I called a friend that I haven't seen in 13 years. They sent a car for me but I have no idea where the car will take me, and the driver tells me he was told not to tell me.

If things have changed like this then I should move back to Iran. Although, your income must be in dollars too.

Zad updates his followers with how busy his trip in Iran has been.

I've been going around at the rate of one year within these four years.

Zad updates his Twitter account with posts related to building websites and the politics surrounding Iran's nuclear deal with the US.

Zad tweets about his trip to Masuleh, a city in Iran's north Gilan province.

You have to go to the Masuleh to see it from up close how great it is.

Zad's last online activity is from July 31, when he informs his followers he missed his flight the previous night due to the long lines at Tehran's Imam Khomeini International Airport. According to reports, Zad was arrested by Revolutionary Guards intelligence officials while trying to board his flight back to Istanbul on July 31.

I missed my flight last night. The interesting part in this was that at 3am there was line in front of Imam [Khomeini] airport that started from outside the entrance.

@21aban It is awful [Imam Airport]. Like the country, it is operating off of a supernatural force.

Contacts of Zad started to receive phishing emails from his email account on August 2. While not known at the time, Zad was incarcerated when the phishing attempts were sent out, leading many to believe these attacks originated from the Revolutionary Guards intelligence units. Internet researcher Nariman Gharib posted one such attempt on his email from Zad's account on Twitter.

At the time of these conversations and texts were sent for many, one of the only ones who successfully received a phishing attempt was me. 2/2

According to test done by Global Voices, as well as reports by RSF, Zad's blog Weblogina is inaccessible in Iran.

Reinforcing a climate of fear and self-censorship

This arrest highlights the often unexpected turn of events that those with a public online presence within Iran can face. As his tweets indicate, Zad never feared that his work positioned him in opposition to the Iranian authorities. His work was devoid of politics and appeared welcome by the government.

It is clear, however, that Iranian authorities such as the Revolutionary Guards perceive threats to the state based on red lines that are unknown to the “offenders” and tied to the current political climate.

The nuclear agreement raised hopes among Iranians that improvements in economic development and online freedoms could be on the horizon. Cases like Zad's give pause to that optimism. Like many other policies in Iran, the arrest of a figure like Zad further reinforces fear and self-censorship online.