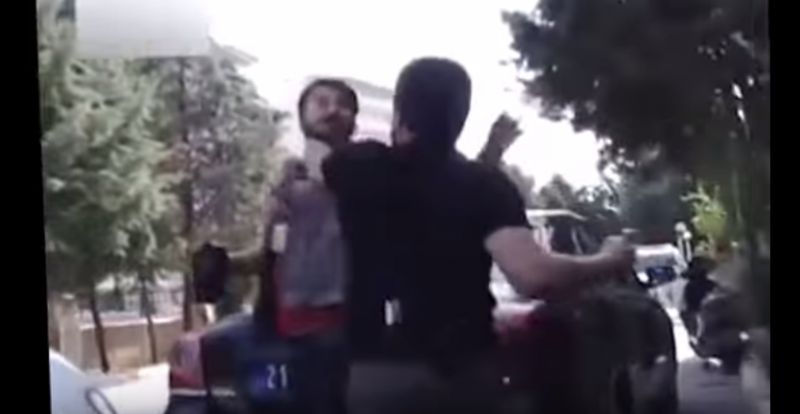 Turkey's November 1 election is fast approaching and journalists in the country are facing new levels of threat amid an atmosphere of fear and violence.

In the space of a week in October, journalists Ahmet Hakan and Serhat Yüce both suffered beatings that have sparked an outcry over the lack of security for journalists in the country. The October 1 assault on Hakan by a gang affiliated to Turkey's ruling party was the most resonant for users of social media in the country. Police aggression towards Yüce that took place on October 5 also has been widely condemned.

Pressure on journalists is intensifying ahead of a ballot the ruling AKP (Justice and Development) party hopes will grant it the majority it craves. The party lost some of its political dominance following elections in June that led to a split parliament and fresh snap elections, and has doubled down on opposition as one of its main achievements in the last decade — the Kurdish peace process — threatens to fall apart as a result.

In the face of Kurdish militancy and increased government violence towards the citizenry, journalists who use a critical lens to investigate and report on the activities of President Recep Tayyip Erdoğan and his AKP party are left particularly vulnerable to harm.

Most noticeably, information campaigns and physical intimidation that once targeted Kurdish and leftist media are now being aimed at mainstream media as well.

Doğan Media, which encompasses influential outlets such as Hürriyet and Hurriyet Daily News, Posta, the TV channels Kanal D, CNN Türk, and tv2, is one of the biggest media groups in Turkey. Owned by famous media mogul Aydın Doğan, the group has always operated as a standard mainstream media organisation, dodging sensitive topics while tending towards objectivity.

But Doğan came under pressure before the June 7 election, wherein AKP's ambitions to dominate the next parliament were undercut by the arrival into the legislature of pro-Kurdish People's Democratic Party (HDP). In the run-up to the vote, the group provided air time to members of the HDP and its leader Selahattin Demirtaş.

This was unpopular among nationalists who attacked the media group and claimed that they were “promoting” Kurdish separatism and “supporting terrorism”.

After elections, Doğan began to take precautions. As one journalist put it, self-censorship took hold across the network. Guests from HDP no longer featured in the broadcasts of Doğan group programs.

But even these precautions proved insignificant. On the nights of September 6 and September 8, the headquarters of leading Doğan group new site Hurriyet Daily in Istanbul were attacked with stones and sticks by a mob organised by the AKP parliamentary deputy and leader of the AKP Youth, Abdurrahim Boynukalın, who publicly delivered a threatening speech in front of the Hurriyet's offices.

Boynukalın was not punished for his role in organising the unruly demonstration.

Ahmet Hakan beaten in front of his home

Attacks on Doğan Media and their journalists continued when well-known anchor Ahmet Hakan Coşkun was beaten by four people in front of his house, who reportedly broke his nose and ribs. Following an investigation, it emerged that three of the four assailants were AKP members. AKP subsequently announced it had expelled them from the party.

Initially supportive of AKP and Erdoğan, Hakan became more critical of them over time, as AKP grew increasingly conservative and authoritarian. This switch was noted by scribes in the pro-AKP press such as columnist Cem Küçük, who spuriously accused Hakan of supporting the Kurdistan Workers’ Party that favours independence from Turkey for Kurds.

He wrote in the Star newspaper:

Like schizophrenic patients, you [Hakan] think you are still living in the days when Hürriyet ran the country. We could crush you like a fly if we wanted. We have been merciful until today and you are still alive.

Those words were printed less than a month before he was assaulted.

Although most journalists and media organisations condemned the attack, pro-AKP media tried to blame others. Groups on social media known as AKTrolls (pro-AKP anonymous users, mostly active on Twitter) even celebrated the event:

The silencing of Kurdish outlets with the help of Turkey's security forces is another feature of Turkey's increasingly bleak media environment. Just two days before Ahmet Hakan was attacked, a building that houses both the Kurdish news agency DİHA and the Kurdish-language newspaper Azadiya Welat was raided by police.

The raid occurred without a warrant on the afternoon of September 28. Police took around 30 journalists, editors and reporters into custody where they say they were harassed and intimidated. Police also broke windows and doors inside the building.

A door to the truth! Police who raided DİHA did this. We're watching you and we're coming after you. #DontTouchDİHA -Nedim Türfent, English Editor of DİHA.

One possible reason for the raid is DİHA's hard work in Kurdish cities where conflicts between the Kurdish independence groups and the police have been prominent. AKP has demonstrated its will to to censor news coming out of cities like Cizre, Beytülşebbap, Hakkari and Şırnak, where the agency has been particularly active.

DİHA is the most respected news source for many Kurdish people living all around the world and many others who lack trust in mainstream media. Its website was first censored in July as part of a wave of blocks covered by Global Voices. Since that time, their backup domains and mirrors have been blocked more than 20 times.

Putting a gun to a journalist's head

The most recent event to shock journalists in the country demonstrates how far the government has veered off the track of acceptable behaviour in its war on the media.

Özgür Gün TV reporter Murat Demir and DİHA reporter Serhat Yüce were both threatened, beaten, and then taken into custody by undercover police in public in the provincial town of Silvan in Kurdish-populated eastern Turkey.

When they were preparing to photograph the town under curfew, a police man stopped his car nearby, loaded his gun and aimed it at Serhat Yüce's head while verbally threatening him.

Journalism has never been an easy profession in Turkey. Threats, beatings, torture or even killing journalists have been running themes in Turkish media history.

The attacks on outlets and media workers is reminiscent of very dark times from Turkey's history and has justifiably breathed fear into the independent and critical press. Events including the arrest of VICE journalists and the deportation of Frederike Geerdink also demonstrate attacks on the free press are not limited to Turkish citizens.

Predicting the future anywhere is difficult, let alone in Turkey, where the last few years have seen a host of economic and security challenges drag the country back in the direction of its violent and unfulfilling past.

But it seems certain that until November 1, there will be no let up, and journalists will have choose between self-censorship and growing risk.