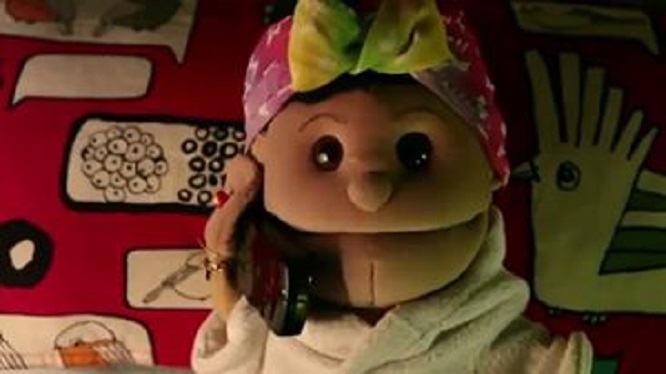 Abla Fahita, a comical hand puppet and frequent guest on Egyptian late night television. Authorities briefly identified her as a security threat after she appeared in a controversial Vodafone ad in 2013. Screen capture from advertisement via Mada Masr.

In Egypt, many users reported this week that they could not use voice calling features on Skype, WhatsApp, or Viber. Technology consultant and digital activist Amr Gharbeia has been tracking these developments and interviewing users across the country to ascertain what exactly is happening and whether the apparent blocks on certain services came as the result of a government order. On Facebook, Gharbeia wrote that long distance VoIP calls via Skype have been blocked in Egypt since 2010, but that this appeared to have extended to WhatsApp during the first week of October. He continued:

There are conflicting reports about the state’s policy regarding blocking. Official statements from NTRA [Egypt’s telecommunications regulator] deny blocking, customer service representatives publicly deny blocking, but after pressure they mention to a lot of complaining users that blocking decision is ordered by NTRA….

Two arrested in Lebanon for Facebook posts
Journalist Mohammad Nazzal was sentenced in absentia to six months in jail and a fine of US $700 over a post he published on Facebook two years ago that contained the sentence “the judicial system is as low as my shoes,” which authorities say constituted libel and defamation. In a separate case, political activist Michel Douaihy was detained for nine days over a Facebook post in which he criticized authorities’ treatment of radical Sunni cleric Ahmed Al Assir during his arrest last August.

Venezuela blocks Bitcoin sites in crusade against foreign currency
A number of websites were blocked by Venezuelan CANTV, according to reports. The reason for the block remains unclear. The two leading theories are that it was either caused by a technical failure or was a deliberate attempt at filtering the sites. Among those sites affected were a number of Bitcoin related websites, including coindesk.com and blockchain.info

Thai netizens stage virtual sit-in to protest “single gateway” proposal
The Thai Ministry of Information and Communications Technology has been ordered to reduce infrastructure connecting Thailand to the global Internet so that all traffic will pass through a single gateway, allowing the government greater capacity to monitor and potentially filter online content. In response to the proposal, Thai netizens staged a “virtual sit-in” on September 30 by flooding government websites with traffic that forced them to go offline. The gateway is another in a series of measures the NCPO has taken to curtail free expression since the coup, including passing a draconian security law and cracking down on journalists and independent media.

Student detained in Indonesia for publishing evidence of police extortion
An Indonesian university student was detained and charged with defaming a police officer after uploading a video of the office attempting to extort him for money during a routine traffic stop. He has been charged under Indonesia’s Electronic Transaction and Information Act.

Jailed Syrian developer moved to undisclosed location
Syrian-Palestinian software engineer Bassel Khartabil was moved from his prison to an unknown location, leading to fears that his life may be in danger. Bassel was detained by the Syrian government on March 15, 2012, and tortured for five days before being held incommunicado for nine months. He was finally charged in December 2012 with “spying for an enemy state” and was transferred to Adra Prison, where he remained until October 3, 2015. An online petition calls for his immediate release.

Don't use Reporta, say security experts
Reporta, a mobile app developed by the International Women’s Media Foundation calls itself “the only comprehensive security app available worldwide created specifically for journalists.” But it had barely launched when researchers found it to be riddled with security flaws. Intended to help media workers and bloggers conduct their work in a safe and secure fashion, with features such as check-in system for journalists in transit and a “panic” button, security experts are deeply concerned about the organization's evident failure to meet basic security standards in their technology. The organization does not disclose where data collected on the app is sent, and it is difficult to determine how well protected this information is while in transit. There is also no evidence that it was publicly audited, a standard practice for new security tools.

Organization of American States condemns Peru’s “Stalker Law”
The special rapporteur for free expression for the Organization of American States raised concerns about a proposed surveillance law in a letter to the Peruvian government. The law, formally known as the Legislative Decree No. 1182 but known among digital activists as “Ley Stalker” (“Stalker Law”), would allow law enforcement authorities access to mobile phone data without a warrant and requires telecommunication companies to retain data for up to three years. The rapporteur emphasized the need for such legislation to undergo public debate, and asked for more information about the justification for and proportionality under existing laws.

No more ‘Safe Harbor’ for US tech companies, says EU court
The European Court of Justice declared the EU-US Safe Harbor Agreement to be invalid in a landmark decision this week. Under Safe Harbor, the EU afforded the transfer of commercial data between the EU and the US despite the EU’s higher standards for privacy protections, provided that signatory US companies agree to comply with a set of privacy principles. However, the court indicated that the revelations of PRISM and US government surveillance of data undermined this agreement and Europeans’ right to privacy.

Coalition asks Facebook to fix its broken “real name” policy
The Nameless Coalition, a global coalition of NGOS that includes Global Voices called on Facebook to amend its policy requiring users show their “real” or legal names on their profiles. In an open letter, the coalition writes that Facebook “maintains a system that disregards the circumstances of users in non-western countries, exposes its users to danger, disrespects the identities of its users, and curtails free speech.” The group has called for several changes to the policy, including allowing users to contest the requirement through a written appeals process and providing clearer documentation on the process of submitting identity information when necessary. Several other media outlets have reported on the letter, to which Facebook has yet to issue a formal response.