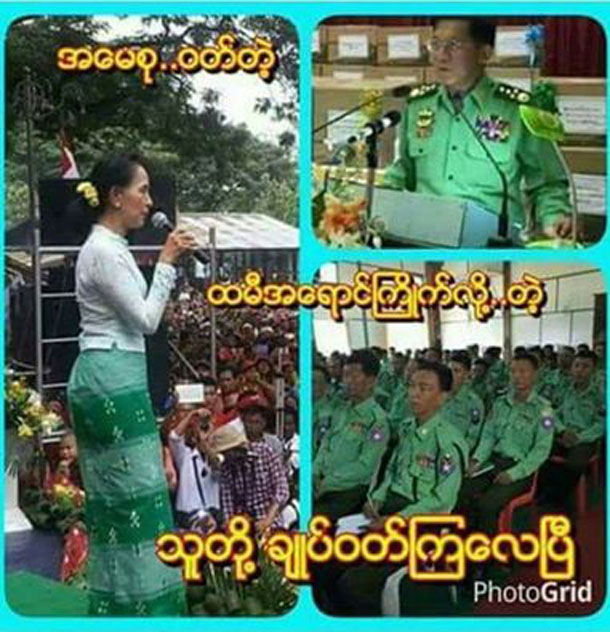 This edited article by Salai Thant Zin is from The Irrawaddy, an independent news site in Myanmar, and is republished on Global Voices as part of a content-sharing agreement.

A young woman was brought to trial in Myanmar after sharing a satirical post on social media deemed to be insulting to the country's military.

The post compared the new military garb to the apparel of the renowned opposition leader, who chairs the National League for Democracy (NLD) and once served nearly two decades of house arrest under the former military junta.

A text transposed on the image read:

[They] like the color of the longyi of Aunti Suu [Aung San Suu Kyi], so they had it tailored and are now wearing it. 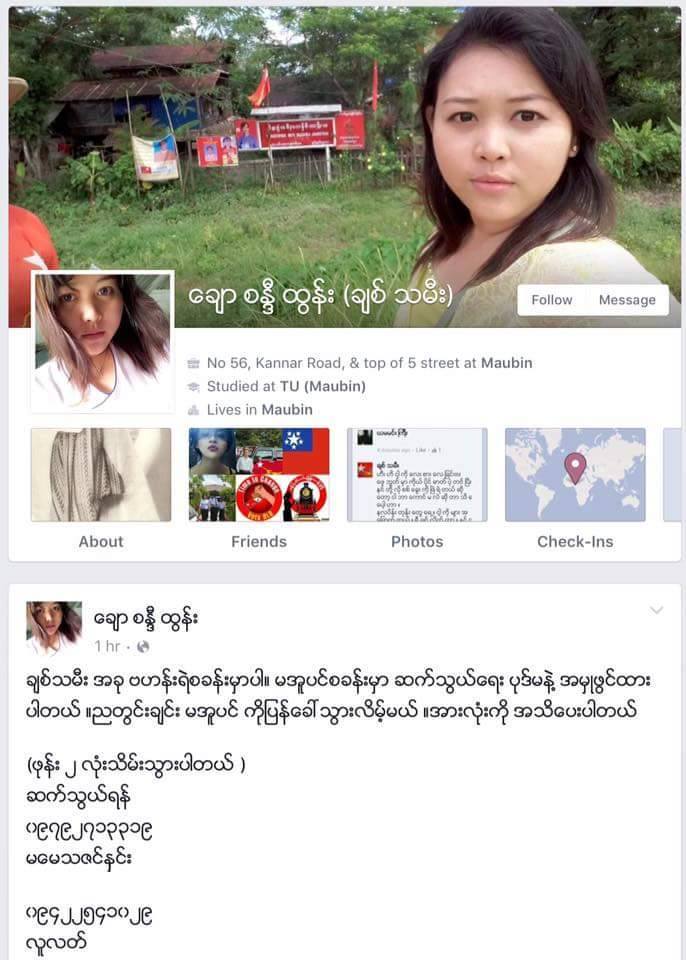 The image hit a nerve in Myanmar’s conservative society, where it is considered an insult to imply that a man would wear htamein, the woman’s version of the traditional Burmese sarong known as longyi.

A Myanmar army general staff officer, Lt. Col. Kyaw Htin of the Southwest Command in Pathein, filed the suit against Chaw Sandi Tun on October 12 under Article 34d of Burma’s Electronic Transactions Law. The vague provision, which carries penalties of up to five years in prison, outlaws altering digital information in such a way that would defame “any organization or any person.”

After her arrest on October 12 at a meditation center in Yangon, Chaw Sandi Tun was taken to the Maubin police station where she has since been in custody. She was brought to trial at noon the next day and will return on October 27, according to a member of the local students’ union that is assisting her case.

Chaw Sandi Tun, who earned a Bachelor’s degree in technology, is a former member of the Maubinn District Students’ Union and took part in student demonstrations against a new National Education Law earlier this year in Irrawaddy Division. She has since resigned from the students’ union and joined the local chapter of the NLD, and now works on the party’s election campaign.

The head of the Maubin police force, Lieutenant Thein Aung, told The Irrawaddy on Tuesday that he could not provide any comment or further clarification about the case because he “didn’t get permission.”

Chaw Sandi Tun is at least the second person to be arrested this year after sharing a satirical online post viewed as critical of the military. In February, police arrested Aung Nay Myo, a freelance photographer in Monywa, after he posted a satirical photo on his Facebook page that reportedly mocked Myanmar officials. He was released after three days of interrogation.