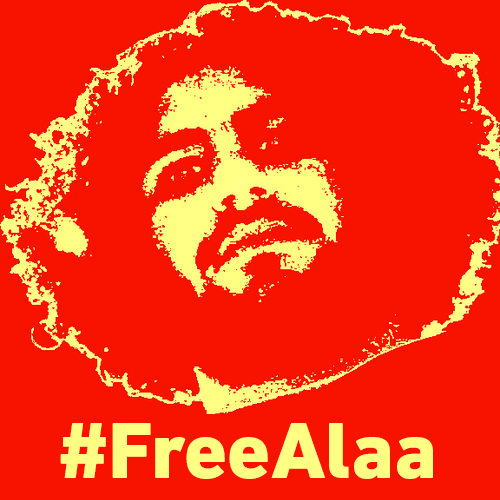 It's been a year since the imprisonment of Egyptian blogger Alaa Abdel Fattah, an icon of the Egyptian revolution, for his activism. Alaa was slapped a five year prison sentence for allegedly taking part in a protest and “assaulting a policeman and stealing his walkie talkie.” He was also fined 100,000 Egyptian pounds (13,000 US dollars). To mark the anniversary, netizens from around the world changed their avatars to Abd El Fattah's infamous picture on social media platforms to draw attention to his plight and that of thousands of other political prisoners in Egypt.

Abd El Fattah is one of 25 defendants in what has become known as the Shura Council case. He was first arrested for this case on November 28, 2013. Last June, he was sentenced to 15 years in absentia and given a 100,000 Egyptian pound fine after being convicted of attacking a police officer and violating a 2013 protest law that prohibits unauthorized demonstrations. According to Mada Masr, which quoted the state-owned Ahram Gate website, they are accused of: “organizing an unauthorized protest outside the Shura Council in Cairo, attacking a police officer, stealing a walkie-talkie, hooliganism, aggression against police officers, blocking the road, crowding a public place and destruction of public property.”

After an appeal by his lawyers, Abd El Fattah was issued a retrial in August 2014. On September 15, 2014, the presiding judge recused himself from the case after an incident a week earlier, in which the prosecution presented a video depicting Manal Hassan, Abd El Fattah’s wife, dancing. Taken from Hassan’s laptop, which confiscated by police when Abd El Fattah was arrested and taken from his family’s home in November of 2013, the video bears no discernible relationship with his political activities.

The saga came to a complete circle on February 23, 2015, with the new judge issuing a five year jail sentence against Abd El Fattah and another defendant Ahmed Abdel Rahman, who was passing by the protest, and was arrested along with Abdel Fattah, as he was helping some girls who were being harassed by the police. Abdel Rahman was also slapped a similar fine. Eighteen other defendants were sentenced to three years in prison and three years on probation, in addition to a similar fine.

In addition to changing their avatars for the day, supporters shared some of Abd El Fattah's quotes and tweets. His aunt, renowned novelist Ahdaf Soueif translates some of them here:

I؛m Alaa. I'm proud that I'm doing what I can & sometimes surprise myself with what I'm capable of ..” #FreeAlaa https://t.co/LlYlbPh5Wp

“Tomorrow we'll invent solutions without locking each other up. Tomorrow is ours.” #FreeAlaa https://t.co/owogmcvd8A

And another quote which explains Abd El Fattah's position on his imprisonment:

#freeAlaa – every time I am jailed, a piece of me breaks pic.twitter.com/xt6F4b4KoP

The anniversary campaign garnered reactions from around the world, as Abd El Fattah's work as a blogger, activist and coder is respected worldwide.

Everyday, I think about Alaa Abdel Fattah and all other unjustly detained prisoners in Egypt. #FreeAlaa

#FreeAlaa One year in prison for organizing a protest is one year too long. pic.twitter.com/XcKgfUDn6F

And Ahmed Abdel Rahman too was not forgotten. Many tweeted how the innocent passer-by was embroiled in this mess. Hend Nafea explains:

Ahmed Abdel-Rahman has been in detention for1year today for protection a women from attacks of policeman #FreeAlaa pic.twitter.com/OoHhSKZ5Tx

Omar Robert Hamilton reminds us why this campaign is important:

A tweet is a small thing. But a million tweets might shake the world. Alaa believes in the power of communication and so, today, should we.

Since November 2013 Alaa has spent 575 days behind bars. He has 4 more years to serve on his sentence. His crime: protesting #FreeAlaa

Alaa is not the only prison of conscience. We want freedom for him and for all. #FreeAlaa #FreeAllPrisonersOfConscience

Earlier today, Abd El Fattah's family took the protest offline to the streets, where they stood in front of the Ittihadeya Presidential Palace to protest the activist's imprisonment — and that of other political prisoners in his case:

Another photo from outside the Presidential Palace where Alaa's family is protesting his imprisonment now. #FreeAlaa pic.twitter.com/AbxFGgLYls

Alaa's mother, Leila Soueif, is seen, right, carrying a poster bearing the names of the four prisoners still jailed by the regime from the Shura case. In addition to Alaa and Ahmed Abdelrahman, Abdelrahman ElSayed and Abdelrahman Tarek are also imprisoned. Despite a presidential pardon to release politicial detainees, those four prisoners were not spared.

In this video, Soueif, who is an activist as well, says they have been standing for an hour reminding people about Alaa and Ahmed Abdelrahman, who have spent a year in prison after being sentenced in the Shura case.

Of course, the trial was a farce and they were forgotten in the pardon. So we have four young men in the Shura case who were not included in the pardon. We also have thousands of detainees but today we are talking about Alaa and Ahmed Abdelrahman who have spent a year in prison.

And here, his sister Mona Seif, also an activist, carries a poster which reads: “There are still so many unjustly imprisoned. Freedom for the prisoners”:

There are still so many unjustly imprisoned. Freedom for the prisoners. #FreeAlaa pic.twitter.com/vJUZLR0rQ0

Around Cairo, posters calling for the four remaining political detainees from the Shura Council case not included in the pardon popped up. Abd El Fattah's sister, Sanaa Seif, also an activist who was imprisoned for taking part in a protest, shares photographs of some of those posters on Facebook: 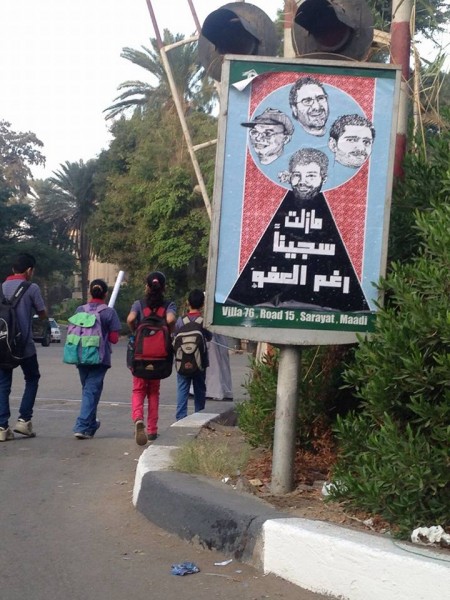 Posters calling for the release of the remaining four remaining political detainees from the Shura Council case who were not included in a presidential pardon popped up across Cairo today. Photo credit: Sanaa Seif (Facebook)