Hisham Almiraat in his home city of El Jadida, Morocco in October 2013. Photo by Ellery Biddle.

Hisham Almiraat, a medical doctor and long-time community leader at Global Voices, will face trial in Morocco this week on charges of “threatening the internal security of the State.”

Almiraat is being charged along with four other civil society advocates — historian Maâti Monjib, journalists Samad Iach and Mohamed Elsabr, and free expression advocate Hicham Mansouri. Free expression advocates and media rights groups widely agree that the case represents an attempt by the Moroccan government to silence those who are critical of its policies and practices.

Evidence in the case against Almiraat, who has written for Global Voices since 2009 and served as the community's advocacy director from 2012 – 2014, includes his testimony for “Their Eyes on Me,” a research report on technical surveillance in Morocco. The report was published by London-based NGO Privacy International in cooperation with the Association des Droits Numériques (Association for Digital Rights), a Moroccan civil society group which Almiraat helped launch. 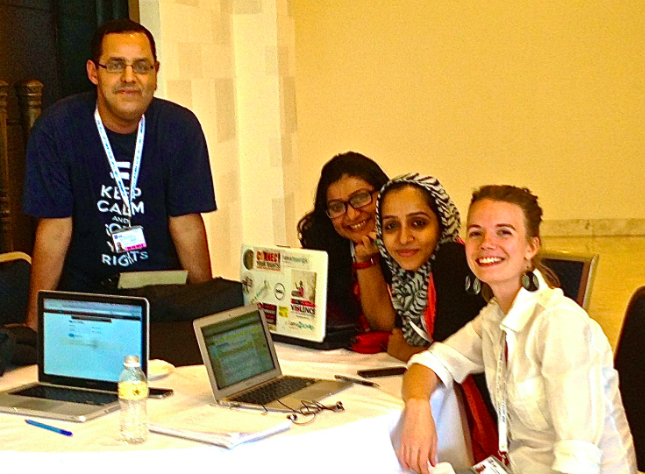 Almiraat and his colleague Karima Nadir, vice president of the Association, were interrogated by Morocco's Judicial Police (BNPJ) in Casablanca in September 2015. Authorities asked them about their work and their relationship with Privacy International. The Ministry of Interior then filed a judicial complaint concerning the organizations’ aforementioned joint report on surveillance in Morocco.

Almiraat has spent most of his adult life working to improve the lives and well-being of Moroccans, both as a civil society advocate and as a medical doctor. While studying medicine and working as an emergency room physician by day, Almiraat ran his own blog, wrote for Global Voices, and co-founded citizen media projects Talk Morocco and Mamfakinch. The latter project was formed by Almiraat and a group of fellow human rights advocates in an effort to bolster media coverage of social uprisings in Morocco in 2011-12 and played a central role in galvanizing public support for the protest movement.

During this time, Almiraat and his colleagues at Mamfakinch were targeted with surveillance software that invaded their computer systems and left them fearful that their communications were being watched. These fears were later confirmed with research by the University of Toronto's Citizen Lab. In July 2015, leaks from the files of Italy-based surveillance software company Hacking Team showed that the Conseil Superieur De La Defense Nationale, a Moroccan government agency, purchased Hacking Team software in 2012.

Almiraat's work over time has been primarily in the service of supporting a robust media environment in his country, and holding his government accountable for its commitments to international human rights standards of free expression and privacy.

The Global Voices community stands in solidarity with Hisham and invites readers around the world to support his case on social media and to read and share his stories, which can be found here and here. Shortly we will release more information about the case, along with an open statement of support.