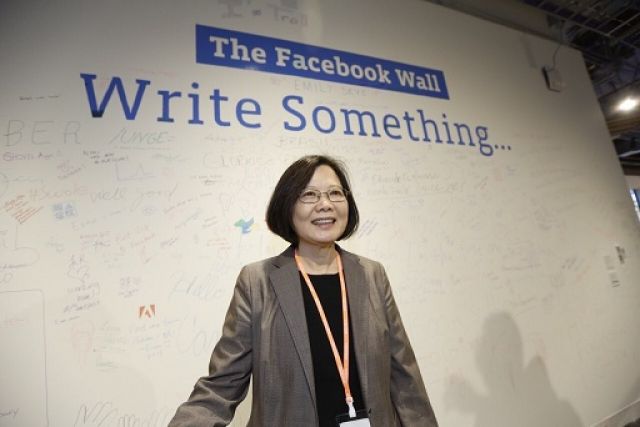 Tsai Ing-wen, the favorite to become the next president of Taiwan, recently saw her Facebook page flooded with negative posts. The messages appeared to be written by pro-government Chinese netizens who suddenly were able access to the social media platform, which largely has been blocked in China since 2009.

Instead of deleting the negative messages, Tsai's social media team took the opportunity to address her visitors from the mainland. She was joined by many other Taiwanese users who took advantage of the unique situation to post news and information censored in mainland China in an effort to “educate” their Chinese counterparts.

Alongside an image weaving together the “F” from Facebook's logo and the word “freedom”, Tsai's message to the Chinese newcomers was:

I want to welcome the numerous friends from across the strait who have visited my Facebook page since last night. In Taiwan, through social media, we are able to communicate and discuss current events and even mobilize social movements. Progress is made through communication and debates over difference of opinions and listening to multifaceted voices.

I hope our “new friends”, through this new experience, can further witness the free, democratic and pluralistic Taiwan. Welcome to Facebook!

China considers Taiwan to be a rogue territory. It has threatened in the past to forcibly retake Taiwan if it were to formalize its independence, even though in practice Beijing has no control over the island.

Tsai represents the main opposition Democratic Progressive Party (DPP) against the current ruling Chinese Nationalist Party (KMT), which was defeated by the Chinese Communist Party during the Chinese Civil War and exiled to Taiwan in 1949. KMT accepts the “One China” principle, which serves as a common ground for cross-strait dialogue. On the other hand, DPP's China policy is considered more strategic and ambiguous and hence not favorable to communist party. 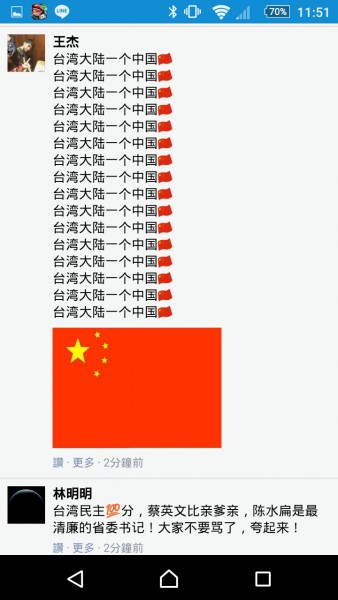 Screencapture of mainland netizen's Facebook comment repeating the phrase, “Taiwan and mainland, one China”. Image from Taiwan's most popular online bulletin board PTT.

On average, Tsai’s posts receives about 500-1,000 comments. Her latest posts incited an online war among her fans and visitors, seeing as many as 10,000 comments in two days.

The negative posts were written in simplified Chinese, which is more often used on the mainland and not so common in Taiwan. Some posts contained images of the Chinese flag and promoted the might of the People’s Liberation Army. One of the messages that read “Taiwan and Mainland, One China” was repeated more than 10 times (see image on the right).

Some Taiwanese Facebook users saw the sudden opening as an opportunity to share otherwise forbidden political content with mainland visitors. Facebook user Dan was one of several netizens who shared a three-hour-long documentary about the Tiananmen Massacre  on Tsai's fan page in hopes that the mainland Chinese users would see. The Tiananmen Massacre was a Chinese government crackdown on protesting democracy activists on June 4, 1989, in which hundreds to thousands of people were killed.

‘This is so counterproductive I almost died laughing’

The posting of censored news and information highlighted the contrast in freedoms between those behind the “Great Firewall” and those beyond it. Facebook user Hu Chan's emphasized the value of the freedom of expression on display in a welcome poster written in simplified Chinese font for mainland Chinese netizens: 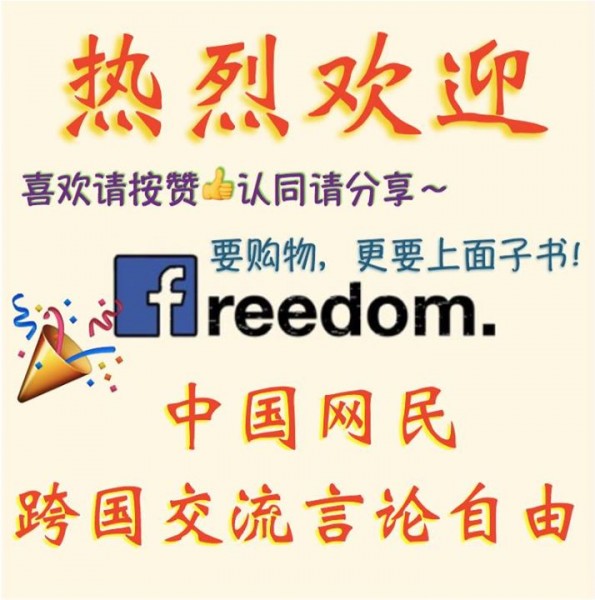 Written in simplified Chinese, the poster says: “Warm welcome. Free to shop and free to Facebook. Welcome to freedom, freedom of expression in cross-border exchanges.”

PPT, a popular bulletin board in Taiwan, was among the first online communities to take note of the abnormality on Tsai's Facebook page. Users came up with many different theories on the lifting of Facebook block, such as a sudden malfunction of the Great Firewall, a trial to prepare for the unblocking of the Facebook or a plot to interfere with Taiwan's upcoming presidential election.

If it was indeed the last scenario, the plan backfired spectacularly, as even users who aren't Tsai supporters flocked to her wall to take part. PPT user “myizumi” wrote in the discussion thread:

Other netizens did not react so cheerfully as they were afraid the 50 Cent Party, as the corps of paid pro-Chinese government commenters are called, would start interfering with Taiwan's online space. A user on the PPT system called “eatingfish” commented:

Will PPT be affected? I am quite concerned

The interactions between Chinese and Taiwanese Facebook users only lasted for two days, however, before the social media site was once again blocked in the mainland. After it was over, Tsai's fan page went back to receiving the average number of comments.