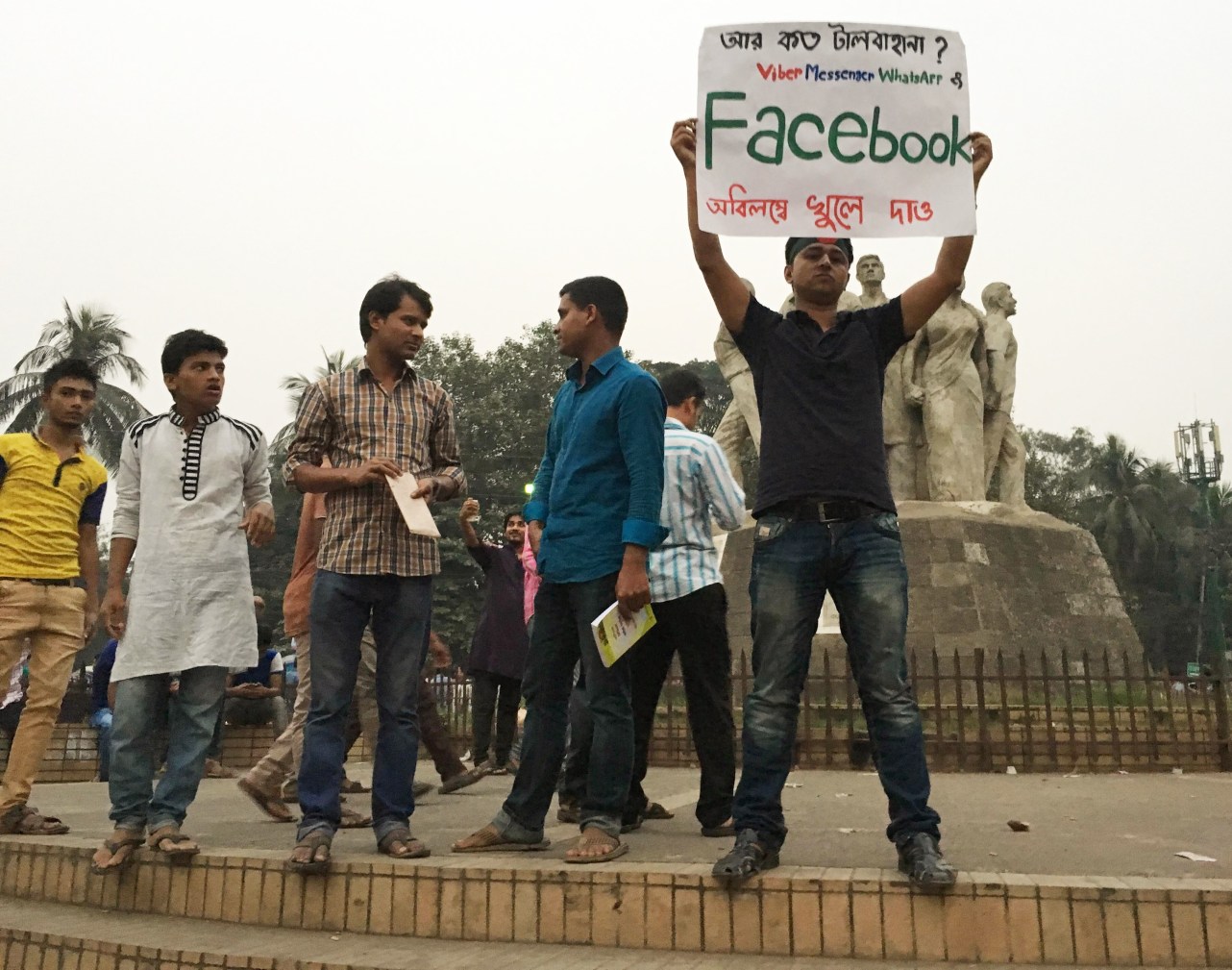 It has been nearly two weeks since the government of Bangladesh banned Facebook, Viber, WhatsApp and other social messaging applications in the country.

The ban stemmed from fears of public unrest following a Supreme Court ruling that upheld death sentences for two political figures convicted of genocide and rape during Bangladesh's 1971 war for independence from Pakistan.

Although the ban has hit multiple applications and platforms, the block on Facebook is especially concerning for citizens. On 28 November, government officials said they planned to propose an agreement with Facebook that would oblige the company to provide authorities with certain user data upon request, in order to ensure “cyber security” in Bangladesh. According to the latest reports, authorities will not lift the Facebook ban until the agreement is signed with Facebook.

This could make for a long wait. Since the company began publicly releasing transparency reports in 2013 (including information about user data request processes), it has not released any user data at the behest of the Bangladesh government.

In the meantime, Bangladeshis have been using VPNs and proxy servers to access social media, but the government now appears to be cracking down on this behaviour. On 29 November, local news site bdnews24.com reported that State Minister for Post and Telecommunications Tarana Halim publicly condemned the use of proxy servers as illegal and problematic due to restrictions on bandwidth:

Firstly, using the proxy servers is a breach of the law. Those who are using them are using a bandwidth with a specific capacity. They won't be able to do that much longer. Because this bandwidth's capacity is low.

Minister Halim went on to warn those who are accessing Facebook through proxy servers that this is not only “illegal”, but also suggested that there was a “high possibility that their IDs would be hacked.” While using any network carries a certain degree of risk for users’ privacy, Minister Halim's comment sounded more like a vague threat than a practical warning.

It appears that Minister Halim's threats now are being enforced by the Bangladesh Telecommunication Regulatory Commission. Twitter user Elana N shared a notification from her service provider, warning that her use of such networks could be monitored:

Government agencies may not be entirely in agreement about the social media ban. Minister of ICT Zunaid Ahmed Palak has been regularly updating his own Facebook page during the time of the block and touting plans for a “Digital Bangladesh” — but whether he has done this using a proxy or some other tool is unknown.

On Facebook, Twitter, and other platforms, users are questioning the ban from various angles. Journalist Udisha Islam writes in an online portal that Facebook users are being kept in the dark:

Don't threaten the Facebook users but tell us what is happening. [..] If a government press-note was issued saying what was the exact reason to block Facebook and Viber and what will be the consequence if people want to still use it circumventing the ban, then people would not use it perhaps.

Dear State Minister, would you please let us know [using Facebook is a] violation of which law? When was Facebook shut down? On which government notification? What is the official gazette [number]? If you arbitrarily block a domain or an IP that does not mean the service is banned [it is a crime to use it]. We know that you may not know much about ICT or telecommunication, but as a lawyer you should be aware how law works. We can expect this much, right?

Some civil society members looking to the law to convince the government to overturn the ban. On 26 November, the Daily Star reported that Supreme Court lawyer Cumar Debul Dey had sent the government a legal notice requesting that it lift the restrictions on Facebook, Whatsapp and Viber within 24 hours. According to him, the “arbitrary” decision violates constitutional rights of Bangladeshi citizens, as well as legal rights guaranteed in Article 39 of the constitution and the rights under the Right to Information Act of 2009. He also mentioned that it moved the country away from Prime Minister Hasina's goals for a “Digital Bangladesh.” At the time of writing, no updates on his complaint had been given.

The ban has also harmed the local economy, with business owners reporting reduced traffic and sales due to their inability to promote their products on Facebook.

I do appreciate the intent but isn't the Govt of #Bangladesh going against #DigitalBangladesh goals? Bad days for Facebook based Startups.

Journalist Bidhan Ribeiro sees the ban was a troubling response to public upheaval over war crimes trials and politically motivated violence that has resulted in the deaths of multiple writers and bloggers since 2013:

Those who are using Facebook via proxy, are they violating any law? Rather you try to take action against those who are breaking law. I will say my words [in Facebook.] This is my right. It is not illegal to use Facebook. You are failing to nab the killers of blogger Avijit Roy or publisher Dipon and you are threatening the common Facebook users. If you have some ego problem with Facebook [regarding disclosure of users information] why make the users suffer for that?

Writing for the Dhaka Tribune, Shafquat Rabee suggests “monitoring who is accessing problematic materials” as the solution. But what the government considers to be “problematic” is another worry for freedom of expression advocates.

On Saturday, Minister Zunaid Ahmed Palak revealed that a draft digital security law is currently being prepared and will soon be sent to the Cabinet for approval. The law, he says, will “help prevent cyber crimes and anti-national activities on the Internet.”

Who decides what “anti-national activities” or “cyber crimes” really are? With the current lack of accountability shown by the government, a move towards more stringent controls of the Internet is worrying for the state of freedom of expression in the country. And with the ban still in place, and a law on the way, this could signal the start of a devastating turn away from the so-called “Digital Bangladesh” that the country is aiming for.