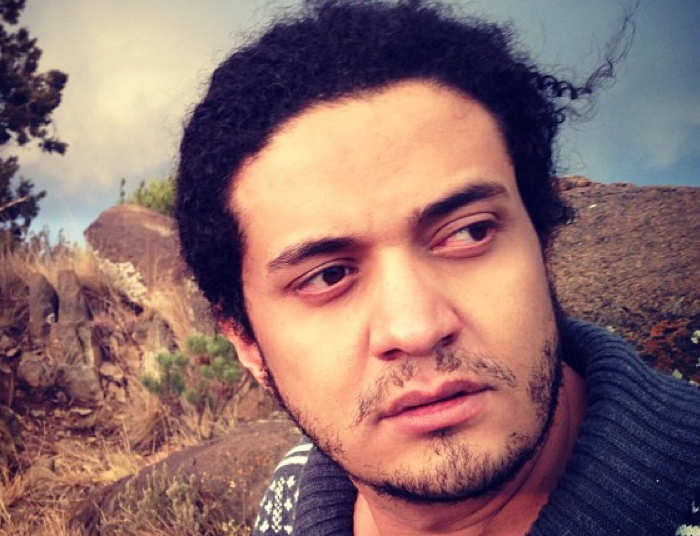 Saudi Arabia is threatening to sue anyone who likens the oil-rich kingdom's penal system to that of ISIS on social media. This announcement came after a court sentenced to death Palestinian poet and artist Ashraf Fayadh for apostasy and other blasphemy-related offenses, which he denies.

Fayadh, who was born and lives in Saudi Arabia, has curated art shows in Jeddah and at the Venice Biennale and has been a key leader of Edge of Arabia, a British-Saudi art organization. Fayadh was first detained in August 2013 in Abha, in South Western Saudi Arabia, by the country's religious police, also known as the Committee for the Promotion of Virtue and Prevention of Vice.

The 35-year-old was released on bail only to be arrested again on January 1, 2014, when he was sentenced to four years in prison and 800 lashes. After his attorneys appealed, judicial authorities decided to re-try his case before a new panel of judges, who sentenced Fayadh to death in November 2015, on charges of promoting atheism in his 2008 poetry collection, Instructions Within.

According to Human Rights Watch:

Prosecutors charged him with a host of blasphemy-related charges, including: blaspheming “the divine self” and the Prophet Muhammad; spreading atheism and promoting it among the youth in public places; mocking the verses of God and the prophets; refuting the Quran; denying the day of resurrection; objecting to fate and divine decree; and having an illicit relationship with women and storing their pictures in his phone. 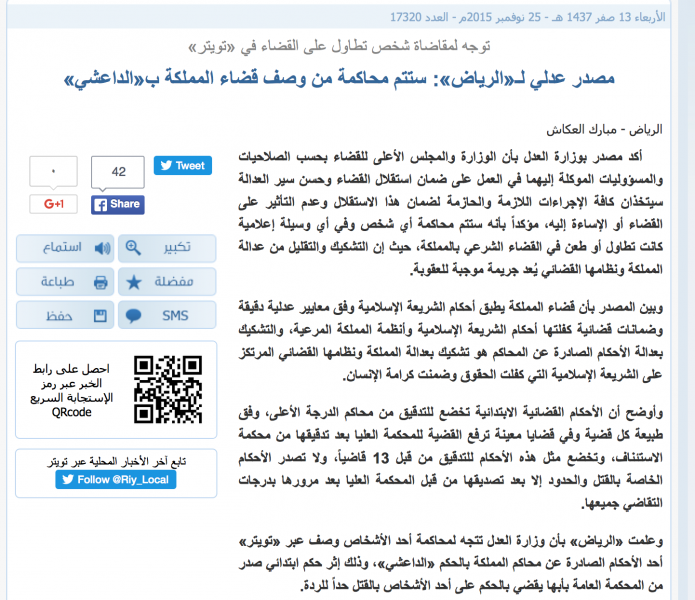 Screen Shot of Al Riyadh newspaper article which claims that anyone comparing Saudi Arabia's penal code to that of the ISIS will be sued.

The sentence was criticised far and wide with many taking to social media, comparing Saudi Arabia's penal code and punishments to that executed by ISIS, which has carved a so-called Islamic Caliphate for itself by brutally occupying swathes of territory across Syria and Iraq.

Quoting an unnamed source from the Saudi Ministry of Justice, pro-government Arabic daily Al Riyadh reported that anyone who criticised the Saudi judiciary and its sentences would be sued. The report added:

According to Al Riyadh sources, the Ministry of Justice is in the process of suing a Twitter user who described a sentence issued by one of the courts in the Kingdom as ISIS-like. The sentence issued by the primary court in Abha calls for the execution of a person for apostasy

On Twitter, netizens lashed out against the news under the hashtag #sosuemesaudi, where many continued to  draw comparisons between Saudi Arabia and ISIS.

Many shared this infographic, created by Middle East Eye, showing the similarities between punishments executed by both Saudi Arabia and the ISIS:

Because if you try to spot the differences between #SaudiArabia & # IslamicState you hardly can… #sosuemesaudi pic.twitter.com/KPgwDxC4GF

According to the infographic, both Saudi Arabia and the ISIS punish blasphemy, acts of homosexuality, treason and murder with the death penalty. While the ISIS punishes slander and drinking alcohol with 80 lashes, the Kingdom's punishments vary, “at the discretion of the judge.”

Many others called out Saudi Arabia for its “ISIS-like” punishments. Egyptian Bahaa Awwad writes:

More than 150 people have been executed in Saudi Arabia this year, or an average of one person every two days, the highest recorded number since 1995.