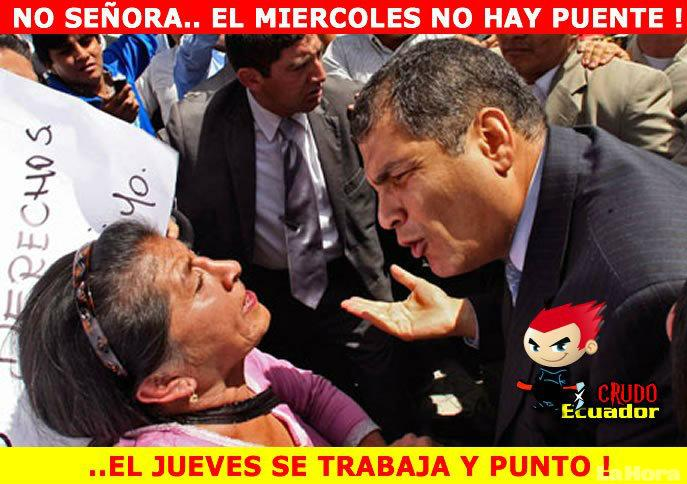 Popular meme created by Crudo Ecuador, based on a real photo of Ecuadorean President Rafael Correa yelling at a demonstrator.

Ecuador’s National Assembly introduced new constitutional amendments on December 3 that are causing alarm for free-expression organizations throughout the country. Among the 15 amendments adopted by the majority in the Assembly, one would re-define communication as “a public service.”

Although it may sound like a measure aimed at further democratizing communication and media structures in the country, it will effectively put control over the media into the hands of a government and ruling party that have shown no hesitation when it comes to controlling media messages and silencing critics both online and off. Just last month, authorities sentenced opposition party leader Sebastian Cevallos to 15 days in prison for a tweet that accused government leaders of nepotism.

The nonprofit organization Fundamedios called the amendment “a serious setback and a violation of the right to freedom of expression” and described the change as a move that will give the state “ownership” of this fundamental right.

Days after the amendment was introduced, Citizen Lab (a research group at the University of Toronto) published an in-depth study on a pro-government hacking and spyware initiative dubbed “Packrat” that has been targeting journalists, activists and opposition politicians in Ecuador, Venezuela and Argentina for as long as six years. Attacking their targets with malware and maintaining fake opposition groups and news sites used to distribute malware and conduct phishing attacks, the initiative shows signs of being linked to government efforts at silencing critics. Among those targeted were Ecuadorian journalist Janet Hinostroza and the popular social media critic known as Crudo Ecuador on Twitter.

Citizen Lab researcher John-Scott Railton told the Associated Press, “The breadth and brazenness of the hackers’ activity bear the hallmarks of state sponsorship….So do its targets.”

For over two weeks following a controversial Supreme Court ruling, the government in Bangladesh blocked access to Facebook, WhatsApp and Viber, among other websites. Officials said the ban was put in place in order to preserve security in light of recent attacks and local political violence, but there is concern that it’s part of a pattern of increasing censorship online. When citizens turned to proxy servers and other technical tools in an effort to circumvent the ban, officials threatened to ban these, as well. Telecommunications Minister Tarana Halim said in a public statement that the ministry is pursuing an agreement with Facebook that would help to prevent the posting of “objectionable” content on the site. Halim and other top authorities met with Facebook regional executives to discuss this and challenges related to the acquisition of user data in law enforcement investigations. It remains unclear whether this will bring about changes that affect Facebook users in Bangladesh.

Venezuela chose a new Parliament last Sunday, December 6, with voters turning out overwhelmingly in favor of the opposition. Ahead of elections, many feared a return of the country-wide Internet blackout that briefly took place during the 2013 presidential elections, following Hugo Chávez’s death. History did not repeat itself at this scale, but there were numerous local-level Internet outages in at least half of the country’s 24 states. These data were crowdsourced by NGO Acceso Libre, which documented issues with Internet access all through election weekend, with a particular focus on states where the political tendencies are traditionally against the ruling party, such as the western states of Zulia and Táchira.

What if #BringBackOurGirls was censored in Nigeria?

Nigerian social media users and human rights advocates are speaking out against a proposed law that would criminalize “abusive” language on social media and messaging platforms. The bill could render two years’ prison time, up to $10,000 in fines or both for anyone who posts an “abusive statement” on such platforms. The bill’s opponents are expressing their concerns about its implications for free expression using the hashtag #NotoSocialMediaBill.

Kazakhstan plans to spy on everyone

Kazakhtelecom JSC announced that it will begin intercepting all mobile communications in January 2016 by requiring citizens to install a new “national security certificate” on their devices. The certificate will function as an effective backdoor, allowing officials to intercept (and potentially block) a user’s communications and browsing of foreign websites. This model makes it cheaper for the company — which is the country’s largest, and is majority-owned by the government — to monitor mobile activity. But it also carries troubling security implications for users and foreign websites alike. Some critics speculate that it could also prompt companies like Google, Microsoft and others to blacklist the Kazakh certificate authority altogether, leaving Kazakh users without access to such major world platforms.

Syrian-Palestinian software engineer Bassel Khartabil, also known as Bassel Safadi, has not been seen since October 4, 2015. It is rumored that the Syrian government has secretly sentenced him to death. Over 37,000 supporters have signed an open petition urging Syrian authorities to inform Bassel's family of his whereabouts and grant him clemency. Supporters are now turning to the United Nations’ Secretary-General Ban Ki-moon and asking for his support to uphold international commitments to human rights and demand Bassel's immediate and safe release. Learn more. 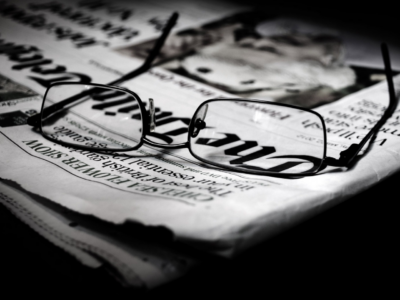