Venezuela chose a new Parliament on December 6, setting in motion what is expected to be a huge turn of the political wheel. With voters turning out overwhelmingly in favor of the opposition — a coalition formed by center, center-right and center-left parties, won the supermajority of Parliament seats (112 out of 167) — this new leadership will likely face a tough year of attempting to recover the long lost independence of the legislative system.

Despite low bandwidth and a series of localized Internet outages, the Web proved critical to public discourse and circulation of information about candidates, especially those running as part of the opposition.

Approaching elections, many feared a return of the country-wide Internet blackout that briefly took place during 2013 presidential elections following Hugo Chávez’s death. History did not repeat itself at this scale, but there were numerous local-level Internet outages in at least 12 of the country’s 24 states. These data were crowdsourced by NGO Acceso Libre, which documented issues with Internet access all through election weekend, with a particular focus on states where the political tendencies are traditionally against the ruling party, such as the western states of Zulia and Táchira.

With the media ecosystem in the firm grip of the ruling political party, whether by means of strategic acquisition, newsprint paper shortages or plain old censorship, the Internet increasingly has served as a space for understanding and interpreting the country’s ever-changing socio-political dynamics. In recent years, the Venezuelan web has burst with informative websites, which for many have come to replace traditional newspapers that have closed their doors for lack of paper. Social media has played a similarly vital role. As journalist Luis Carlos Díaz once put it, Twitter is Venezuela's “information nervous system.” 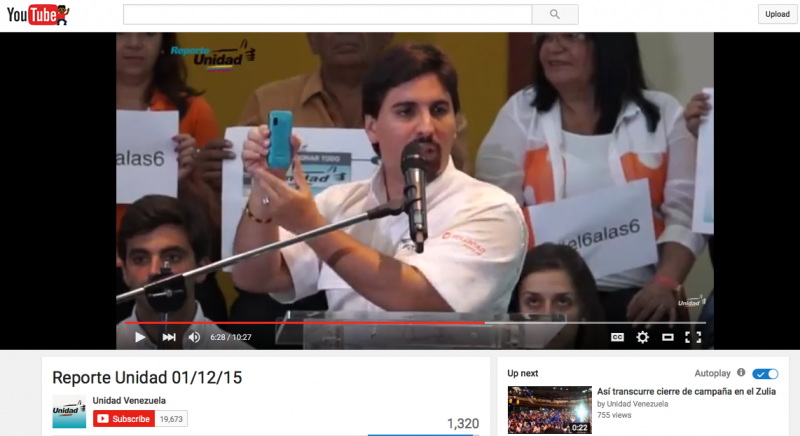 Screen capture from the YouTube newscast by Unidad Venezolana, the unified opposition coalition, explaining to citizens the importance of arriving to the polls early, in order to avoid identity theft.

Politicians outside the ruling party, who have been systematically denied access to public media, also turned to digital resources in order to spread their message: the opposition coalition (MUD, by its Spanish acronym) covered elections through a YouTube channel, which at any given point during Sunday had thousands of simultaneous viewers, despite having been created only a few days before elections and was being promoted by word-of-mouth and social media.

Opposition political leaders also used Periscope, the livestream video app, to transmit short messages during the day and the long night as electors awaited the results. Henrique Capriles, governor and former presidential candidate, used the platform to transmit short press conferences as well as direct messages of hope and success to his audience. The paid, digital-only TV channel VivoPlay was widely sought after because of its 24-hour coverage of the elections, despite the fact that streaming services are useless for much of the population, given the generally very low quality of Internet service: an average of 2mbps.

With 61.62% of the population online and one of the continent’s slowest Internet speeds, it seems that digital connectivity is now more essential than ever for Venezuelans to organize, communicate and defend their rights and freedoms.