Thai Worker Arrested for Mocking the King’s Dog on Facebook 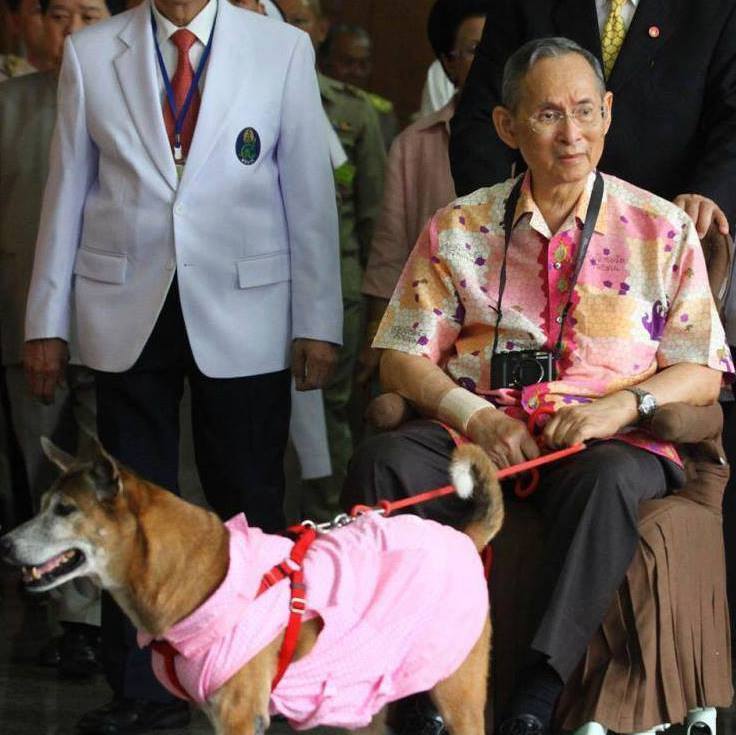 This edited article is from Prachatai, an independent news site in Thailand, and is republished on Global Voices as part of a content-sharing agreement.

A 27-year-old factory worker was detained and charged with sedition on December 8 for sharing an infographic about a corruption scandal and mocking the king’s dog.

On 14 December 2015, the Military Court of Bangkok granted police permission to detain Thanakorn S., a factory worker. Thanakorn is being charged under Article 112 of the Criminal Code for clicking ‘like’ on Facebook contents deemed defamatory of the Thai monarchy. He has also been charged with sedition, under Article 116, for posting an infographic concerning last year's Rajabhakti park corruption scandal, in which the army ordered the construction seven giant statues of prominent Thai kings in Rajabhakti park. It was later revealed that the project was overpriced and that large kickbacks were demanded from contractors. The army has promised to investigate the allegation.

Thai Lawyers for Human Rights reported that in accordance with the arrest report, Thanakorn was accused of lèse-majesté [Thailand's law against royal insult or “violation of majesty”] for clicking ‘like’ and posting a message mocking one of the king’s pets — Khun Thong Daeng, a female copper-colored dog.

He was also accused of pressing ‘like’ on a doctored image of the king and sharing it with hundreds of others online.

Thanakorn was arrested at his house in Samut Prakan Province on 8 December 2015 by military and police officers, who invoked Section 44 of the Interim Charter, which gives officers absolute authorities to maintain national security.

He was then held incommunicado in unknown location.

According to Pradtanah S., the man’s mother, a stranger believed to be a security officer contacted her and informed her that her son was taken to the 11th Circle Military Base on Nakhonchaisri Rd., Bangkok.

In addition to the lèse-majesté and sedition charges, he was also accused of offenses under the 2007 Computer Crime Act. Thanakorn could be imprisoned for up to 27 years if found guilty.

According to Matichon Online, police investigators are now gathering information and evidence to press charges against 20 administrators of an anti-establishment red-shirt Facebook group called the “National Red Shirts Association,” of which Thanakorn was a member.

The Red Shirt group is one of the political groups demanding the restoration of civilian rule in Thailand, with many member who support ousted Prime Minister Thaksin Shinawatra. In 2010, the Red Shirts barricaded the major roads of Bangkok which led to a violent confrontation with the police. When the army seized power in 2014, it vowed to end the street clashes between competing political forces such as the Yellow Shirts and Red Shirts.

The notorious lèse-majesté law or Article 112 of the Criminal Code states, “Whoever defames, insults or threatens the King, Queen, Heir-apparent or Regent shall be punished with imprisonment of three to fifteen years.”

Since the coup in 2014, offences under the lèse-majesté law have been judged by military courts, which allow no appeal. In August 2015, a Thai military court sentenced a man accused of defaming the Thai monarchy on a social network to 30 years in jail in a trial held in camera (not open to the public or press). The ruling is the heaviest jail term ever recorded for a lèse-majesté case.