Ethiopian Netizens Defend Themselves in Court After 525 Days of Detention 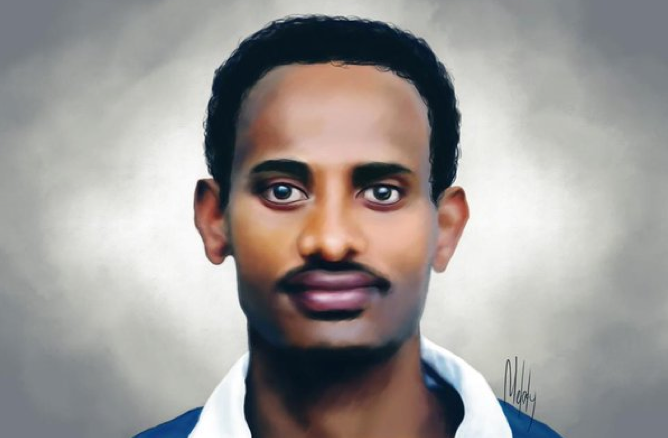 When they began their trial before Ethiopia's Lideta High Court, Ethiopian blogger Zelalem Workagegenhu and his friends Yonatan Wolde and Bahiru Degu had already spent over 1.5 years in detention.

Zelalem Workagenehu, a human rights advocate and academic who contributed to the diaspora-based DeBirhan blog was initially charged in October 2014 with multiple offenses such as being the local leader of Ginbot 7 (an opposition political party founded by Dr. Berhanu Nega), conspiring violent revolution, and publishing news reports on diaspora websites. These have since been reduced to two charges: the first, recruiting members for Ginbot 7 and the second, co-facilitating an online Communication, Social Media and Leadership training, which was later cancelled.

Yonatan and Bahiru have been charged with applying to participate in the same training, which the government describes as a “training to terrorize the country”, and of being members of Ginbot 7, which they all deny.

The Ethiopian government has labeled Ginbot 7 as a terrorist organisation under the country's Anti-Terrorism Proclamation, which was adopted in July 2009. Ethiopian officials tend to defend the law by arguing that its controversial provisions were copied from the existing laws of countries such as the United Kingdom.

With their lawyer disqualified, netizens opt to defend themselves

The trio elected to defend themselves in court after judiciary officials revoked the license of their attorney, Temam Ababulgu, in June 2015, for what were described as “ethical issues.” Ababulgu had previously defended journalists, politicians and religious representatives facing charges under the country's anti-terror law. 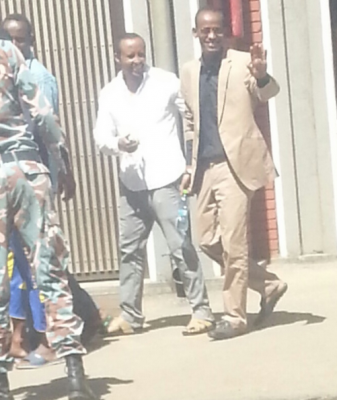 Zelalem and Bahiru leaving Lideta court two weeks ago. Photo courtesy of a friend of Zelalem's, used with permission.

During the two weeks of intermittent hearings at the Lideta High Court in Addis Ababa, the defendants and their defense witnesses gave professional and personal testimonies arguing that the training was legal and educational.

They also alleged that the prosecutor's witnesses were former prisoners expressly released for agreeing to testify against the trio.

Zelalem told the court that he has never been a member of any political party and that he believes in non-violent change. This would make him ineligible to recruit members for Ginbot 7, a group that advocates various forms of struggle. Zelalem’s mother and his friends, as well as opposition politician Habtamu Ayalew, appeared before the court as defense witnesses and testified that he had received no money from Ginbot 7. Zelalem also argued that his Facebook conversations with Yonatan and other people, which are part of the state's evidence, were translated out of context in order to frame them.

The remaining defense witnesses for Zelalem, among them detained journalist Eskinder Nega and opposition politicians Yeshiwas Assefa and Andargachew Tsige, initially were called by the judges. But over the past five sessions of the trial, they have not been brought before court by the relevant authorities.

Witnesses for Bahiru Degu and Yonatan Wolde included Zelalem himself and some members of Zone9 bloggers and journalists, who were recently released after being arrested for over one year in similar charges.

Allegations of torture and ethnic discrimination in prison

Zelalem and Bahiru described the conditions and treatment they experienced in prison. Zelalem said he was detained for 41 days in an extremely cold room also known as “Siberia” in the central Maekelawi Prison in Addis Ababa and was tortured by interrogators. He said the investigators always took his confessions after 10 pm under duress and torture, and that they should therefore not be accepted as his own.

Bahiru Degu detailed the ordeals he went through during investigation. Bahiru said “I was  forced to get naked and was regularly beaten. Due to the severity of the beating, I was unable to control my bowls [sic]. I was forced to drink my own urine.”

Bahiru testified that interrogators asked if he was a blood relative of Dr. Berhanu Nega, Chairman of Ginbot 7, was since they hail from the same ethnic group. He was also asked if he had any connection to Andargachew Tsgie, the Secretary General of Ginbot 7, who is currently in detention. Bahiru is not related to either of these individuals.

Elaborating on the severity of brutality and torture, Bahiru revealed that he even attempted to take his own life. He said “it is a miracle that I am alive to be here in front of you in the court today.” Bahiru told the court that he was racially abused by the investigators, who insulted his ethnic group.

Bahiru also stated that the investigators threatened him, saying “we will cut your blood vessels and kill you. We are the police, the prosecutors, the judges, the intelligence and all are ours; you will be jailed for 20 years.” Bahiru testified that he was tortured and forced to admit he was a member of Ginbot 7 Movement. Bahiru told the Court that his confession statements recorded during the investigation were given under duress and were not his own.

The men's defense hearing is set to continue on December 16, 2015 at the Federal High Court in Lideta, Addis Ababa.

Editor's disclosure: Tedla D. Tekle's name is mentioned in the charges against the defendants, particularly those directed at Zelalem Workagegenhu. Sources for this article include previously published coverage of the case, and first-hand accounts of trial proceedings from Tedla's Addis Ababa-based colleagues. Tedla lives outside of Ethiopia.