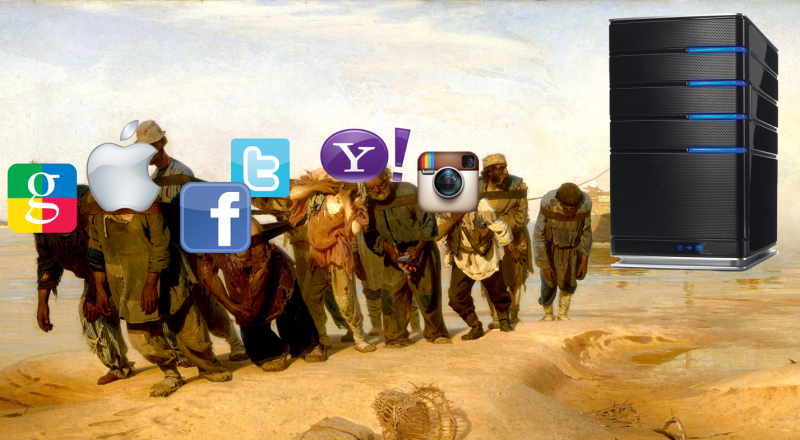 While some Internet companies, like eBay and Viber, have confirmed they plan to comply with data localization demands, bigger players remain tight-lipped on the matter. Images mixed by Kevin Rothrock.

Western Internet and technology juggernauts Google and Apple may be working on moving some of their servers storing user data to Russia, according to head of Russian media watchdog Roscomnadzor. Aleksandr Zharov, who heads the RuNet regulator, spilled the news to journalists in the corridors of the “Internet Economy” forum, currently underway in Russia's capital, but said the information was “unofficial.”

“Facebook and Google haven't replied to us with anything yet,” Zharov was quoted as saying by TASS information agency. “According to information, as you would say, below the line, or unofficially, we know that both Google and Apple are working on localizing their databases on Russian territory.”

When prompted on whether Facebook and Twitter were also working to comply with data localization rules, Roscomnadzor head had nothing new to disclose. “I can't tell you anything. The time will come, we will inspect them and we will find out,” Zharov reportedly said.

Zharov's latest claims carry little weight, as they continue an already lengthy timeline of speculations, rumors, and denials swirling around the issue of data localization in Russia. While some companies, including Booking.com, eBay, and Viber, have confirmed they plan to comply with the user data storage demands, some of the biggest players have remained tight-lipped on the matter.

In April 2015, RBC news agency reported that Google had allegedly agreed to comply with data localization regulations, but Google later denied the claims and told Global Voices these reports were “inaccurate.”

In September 2015, Russian media reported that Apple had caved to Russia's demands and was renting out server space in a Russian data center belonging to a company called IXcellerate. At the time, both IXcellerate and Apple refused to comment.

The data localization law came into force on September 1, 2015, mandating Internet companies and services should store Russian users’ data on servers within Russia. Internet services that do not comply with the law will be added to a registry of violators and could be blocked at the behest of Russia's Internet watchdog, Roscomnadzor.