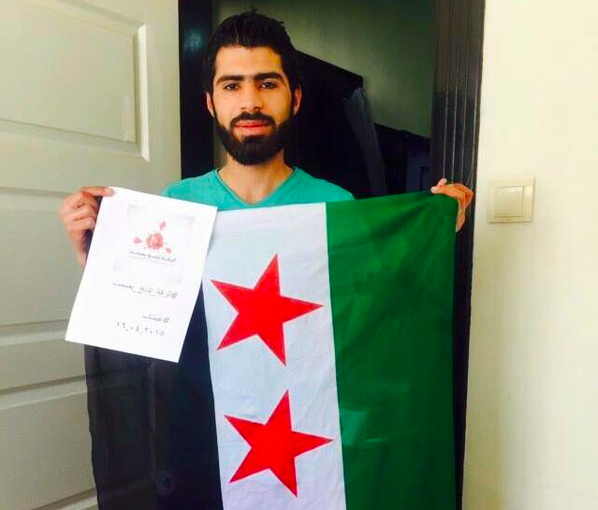 Ahmad Mohamed Almossa, a member of Raqqa is Being Slaughtered Silently (RBSS), was assassinated in Idlib, Syria, by unknown masked men, according to a tweet from RBSS.

Ahmad Mohamed Almossa, a member of Syrian citizen journalism collective Raqqa is Being Slaughtered Silently (RBSS) was assassinated by masked men in Idlib, in north western Syria, on December 16, 2015.

Almossa is part of a group of netizens reporting from Raqqa, the self-proclaimed capital of militant group ISIS, which has carved a so-called Islamic state for itself across parts of Syria and Iraq. RBSS is regularly quoted in media and offers a close perspective on atrocities committed by the ISIS, Syrian government forces and the coalition airstrikes targeting civilians. Two other journalists in the group were killed earlier this year. The group, founded in April 2014, has been threatened by ISIS for exposing their crimes and brutality to the rest of the world and for showcasing the resistance of the people of Raqqa to its rule.

No further information is available about Almossa, but his murder was condemned internationally, with fingers pointing at the ISIS for his death.

Many reacted to the tweet by RBSS announcing Almossa's death:

@Raqqa_SL Murdered by savages. He died for a cause I would be too cowardly to embrace. I salute Ahmad Mohamed Almossa, and all RBSS.

@Raqqa_SL How many of us if tested would have this man's bravery? I think paradise is reserved for people like him.

The Committee to Protect Journalists, which just last month awarded RBSS with its 2015 International Press Freedom Award for its courage in covering news in Syria, condemned the murder, adding:

At least two other members of Raqqa is Being Slaughtered Silently have been murdered since the group was founded in April 2014. In October 2015, Ibrahim Abd al-Qader was killed by Islamic State militants, along with fellow journalist Fares Hamadi, in Urfa, southeastern Turkey. In May 2014, Al-Moutaz Bellah Ibrahim was kidnapped by Islamic State and murdered. In a two-part video series released earlier this year, Islamic State militants claimed responsibility for the kidnapping of al-Mousa's father and four other Syrians accused of being members of the group. Raqqa is Being Slaughtered Silently told CPJ none of the victims were members of its group.

Despite these painful losses, RBSS is continuing its work. Here's a tweet from December 22:

Reporters without Borders ranks Syria among the worst free speech offenders, at 176 out of 179 countries in its worldwide index on the freedom of press. Since March 2011, 50 journalists have been killed in Syria, eight journalists imprisoned, 17 netizens jailed and 141 netizens and citizen journalists killed.