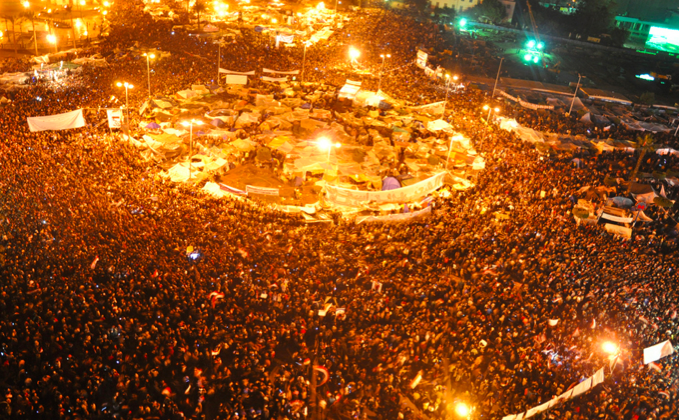 Activists online and on the ground in Egypt have faced heightened scrutiny and legal threats from government authorities since early January, as the country approaches the fifth anniversary of the mass protest movement that toppled former President Hosni Mubarak.

In addition to multiple arrests of activists and artists who have expressed criticism of the current regime, at least five people have been arrested due to their activities as administrators of Facebook pages. Three among them were arrested at the start of January and accused of belonging to the Muslim Brotherhood, the prominent political party outlawed by military leaders in 2013. All were accused of inciting violence against state institutions and calling for protests to be held on January 25.

Various activists promoting protests have also bumped up against Egypt’s so-called anti-protest law, which requires citizens to obtain a state permit before holding a public gathering of 10 or more people.

As online conversations and coordination of demonstrations increases, technology platforms are bracing for challenges as well. Netizens across the country have reported challenges using platforms such as Skype, Facebook, Viber and WhatsApp.

Based on following the situation the reason behind shutting down #Facebook Free Basics in #Egypt, is probably requests to access users data.

And after Facebook’s Free Basics app was mysteriously discontinued by Egyptian ISP Etisalat, Facebook appears to be stepping up its game in order to better serve Egyptian users facing censorship and surveillance constraints. As of January 19, Egyptian Android users can now access Facebook’s mobile site using the privacy-protective Tor browser, thanks in large part to Orbot, a proxy tool created by non-profit tech tool developer The Guardian Project. Learn how to download and use the tools here.

Advocates on trial in Ethiopia, Morocco

January 27 will mark a major court date for several free expression advocates facing trial in North Africa. In Morocco, seven advocates including Global Voices author Hisham Almiraat will begin trial, with five facing charges of “threatening the internal security of the State” and two of “receiving foreign funding without notifying the General Secretariat of the government.” In Ethiopia, blogger Zelalem Workagegenhu and two of his friends will return to court on charges of co-facilitating an online social media training (which never took place) and recruiting members for a diaspora organization. Acclaimed journalist and blogger Eskinder Nega, who is currently serving an 18-year prison sentence on terrorism charges, is slated to testify in their defense.

Access to VoIP services Whatsapp, Viber, Facebook and Skype was blocked by Morocco’s telecom providers, who claim the services breached their regulations. In response Moroccans announced plans to boycott the companies. They say they’ll escalate if the block does not end.

Peru’s National Board of Elections vowed to prosecute anyone who criticizes or humiliates political candidates on social media, under the country’s Organic Elections Law. Elections officials made it clear that the policy would apply to anyone — including competing political candidates. The motion has since been revoked.

Chinese regulators are working to ensure that local content delivery networks —  third-party servers that deliver content to end-users with a certain guarantee of high availability and high performance — remove circumvention tools from their networks. Although the move carries some political significance, experts note that most of these circumvention services are not politically motivated but rather geared towards expediting the streaming of foreign online games and television network programs. The change in tactic may be linked to amendments to China’s penal code made in November 2015 that addressed “Internet-related crime,” among other thing.

Access more than 100 Ukrainian news websites was blocked in the self-proclaimed “Lugansk People’s Republic”, an area of eastern Ukraine occupied by pro-Russian militia. The militia leaders claim the block, which was ordered by decree from the militia’s Ministry of Information, was instituted to protect citizens from the ‘destabilizing’ influence of Ukrainian media. Among the sites blocked are several news services including BBC Ukrainian, Ukrainska Pravda, Obozrevatel, TSN, and 24 TV.