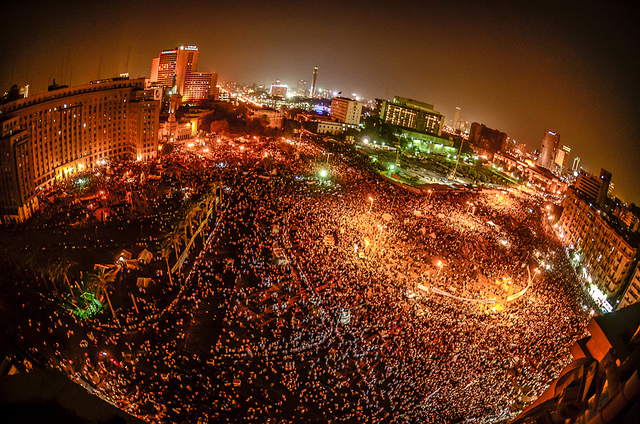 A protest in Tahrir Square in June 2012. Photograph by Mosa'ab Elshamy from his flickr account. Used under (CC BY-NC-SA 2.0)

Five years since Egyptians took to the streets calling for bread, freedom, and social justice, many still remember the January 25 revolution as a euphoric moment where what is called the “fear barrier” was shattered and where Egyptians and with them millions around the world followed with excitement what promised to be a new era for the country and people’s movements globally.

As observed following Egyptians over social media, at best the anniversary is bittersweet. Many remain staunch believers of the basic principles of the revolution and refuse to give up on the revolutionary spirit or consider #Jan25 a failure. Others chose good old Egyptian sense of humor to ridicule president Abdel Fattah El Sisi, the security forces, and even the revolution itself.

Amidst this spirit of reclamation and remembrance, Mada Masr reported that at least 150 opposition activists were arrested in the day leading up to the anniversary of January 25. Those arrested included 78 Muslim Brotherhood members in Giza and the administrator of the Revolutionary Socialists Facebook page, 24 year-old Mohamed Essam. The government did not release the ID numbers or names of those arrested.

I followed the two hashtags #النظام_خايف_من or #The_Regime_Is_Afraid_Of and #الحرية_للجدعان or #Freedom _For_The_Brave and captured some of what people have said to remember the political prisoners and commemorate this year’s anniversary. The Arabic word Ged’an, plural of Gadaa’, can translate literally to “brave” but it also means someone decent, reliable or noble and is used here to describe political prisoners.

Journalist Nora Younis, Editor in Chief of Al Manassa, tells me the hashtag is a riff on the Egyptian saying السجن للجدعان or “prison is for the gallant”, referring to the toughness of imprisonment, as well as the fact that it is often prisoners of conscience behind bars. A few years ago, a Facebook page was launched to publish news about political prisoners, and the founders chose to reverse the saying, with the name Freedom for the Gallant/Brave.
#Freedom_For_The_Brave is one of many hashtags concerning political prisoners in the country. Famous Egyptian satirist Bassem Youssef started a hashtag #افتكروهم or #Remember_Them, and he dedicated his Twitter account to write about prisoners for three days for his over six million followers.

What's left on my mind of #January_25 are the martyrs of the ‘bahiyya’ or the beautiful Egypt. Its young men and women imprisoned in jails. #Freedom_For_The_Brave and long live Egypt

According to The Egyptian Center for Economic and Social Rights, the number of political prisoners including prisoners of conscience includes some 41,000 people. Egyptian President Sisi issued a pardon in late September for 100 prisoners. International organizations, such as Amnesty International, warned “the international community must not be fooled by President Abdel Fattah al-Sisi’s veneer of reform and empty promises.” Although two Al Jazeera journalists and other activists were among those released, Amnesty warned that those spots will soon be filled again.

“Most of those pardoned by President Abdel Fattah al-Sisi should never have been locked up in the first place because they were peacefully exercising their rights to freedom of expression and assembly. But given the authorities’ intolerance of peaceful dissent, the space vacated in prison cells by those freed in the pardon will be filled up again all too soon,” said Said Boumedouha, Deputy Middle East and North Africa Director at Amnesty International.

Every year around this time there is a presidential pardon for criminal prisoners. Campaigns usually precede the pardon hoping to bring public attention to those behind bars. The number of prisoners to be released this year has been announced and sources said they will be “criminal” prisoners. However, many political prisoners are behind bars on trumped up criminal charges.

Indeed, human rights workers and lawyers working on defending political prisoners say that this work seems at times “pointless”. The crackdown on civil and human rights in Egypt has reached unprecedented levels and the sentiment is that no one is safe, including those defending human rights or prisoners’ rights. The story of Taher Mokhtar is a case in point. Mokhtar was a doctor offering treatment for prisoners and documented cases of torture inside jails as part of his role in the Freedoms Committee of the Doctors Syndicate. He was arrested and accused, with others, of violence and attacking security forces, an accusation that became all too common for those observing the political climate in Egypt.

Nour Lotfy explains why it is important to raise awareness about those in prison:

Among prisoners of conscience is Mahmoud Mohammad. Mohammad was arrested on January 25, 2014, on the revolution’s third anniversary, less than a month after his eighteenth birthday. He may be Egypt's youngest prisoner, and was arrested for wearing a t-shirt that said “a nation without torture”:

#The_Regime_Is_Afraid_Of Mohammad Mahmoud and a T-shirt that says “a nation without torture”. Two years “preemptive” imprisonment government of infidels/evils.”

Other prisoners remembered were prominent activists Mahienour El-Massry and Alaa Abd El Fattah. El-Massry sent a defiant letter from her prison cell, balancing her optimism by recounting the mistakes and lessons learned from the revolution. On political imprisonment she said:

[…] there is no individual salvation, and that desperation and the attempts to escape to the outside or the inside will not help us make our day better. When we only saw ourselves and started calling for freedom only for those we know, and did not move for freedom for the all people (for example, in prisons there are not only thousands of innocent political prisoners, but also thousands of citizens who have been framed, or fell in debt or are serving time instead of others, because of the economic system of the state, and many other cases) if we allow the regime to separate us from the street and from our goals, then they have won the last round.

The full translation of El Massry’s letter is available on the Free Mahienour Facebook page.

As Mahienour points out, of the 41,000 political prisoners and those unjustly in jail, many faces and names remain unknown. The Freedom for the Brave campaign, embodied in the hashtag of the same name, has made it a point to campaign for all political prisoners, prominent activists and public figures, as well those unknown, regardless of their political affiliation.

The campaign combines online awareness campaigns and with on the ground organizing. As it states on its Facebook page, the campaign started following the third anniversary of the revolution, where nearly 1,000 people were arrested at the anniversary celebrations. Those arrested included political activists as well as many, including children, arrested arbitrarily. People online remind us of some of those faces, names and conditions they went through in jails.

Here are their words:


More translated tweets by Meedan can be found here.