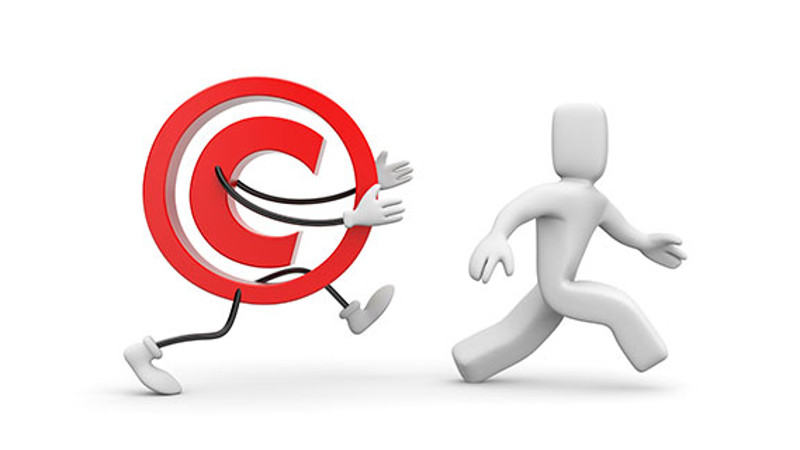 Unlike the current notice and take down system that warns of violations before going to court, the new bill proposes to block websites violating copyright extrajudicially. Image edited by Tetyana Lokot.

Ukraine's parliament is considering a bill that would require hosting services and Internet service providers to block any website violating copyright protections, without any form of judicial oversight.

Approved in first reading on January 28, the bill is only the latest in a series of attempts by a group of lawmakers to introduce “anti-piracy” norms into legislation aimed at protecting the Ukrainian cinema, television and video industries. But the latest round of the proposed amendments could impact a broader number of online platforms and Internet users than past policies.

One key change reflected in the draft bill is that it includes “multi-user platforms” among the types of websites censored for copyright violations. The vague term “multi-user platforms” could encompass social network websites, file exchanges, cloud services and even search engines. Potentially, this could mean that websites like Facebook or some of the Google suite of services could be blocked in Ukraine under the “anti-piracy pretext”. For example, a site like YouTube could be blocked if even just one user were to post (without permission) a copyright-protected film.

The draft law also provides a mechanism for preventing and curtailing copyright violations in “the Internet and local networks.” The latest amendments allow the legal owner of the pirated content to send a take-down notification to the owner of the violating website and demand that the offending content be removed. When asked to remove such content, the owner of the website would have 24 hours to do so. The owner would then need to inform the copyright owner of the blocking no later than 48 hours after they first received the demand. The only cases where website owners can refuse to take down content are if the copyright actually belongs to someone else or if the take-down notice contains errors or inaccuracies.

In an interesting twist, the draft bill mandates that website owners must publish “credible information about themselves” in WHOIS (the domain directory for the global Internet) “in a manner sufficient for creating a lawsuit for a court.” It is unclear exactly what such information must contain and how the authors of the law plan to enforce this rule with the entities who collect and publish WHOIS information online.

Ukrainian industry watchdogs are already alarmed by the new draft bill, which they say clashes with dominant best practices in the west. A spokesperson for non-profit Internet Association of Ukraine (InAU), a telecom watchdog monitoring industry-related legislation, told AIN.UA news website that the proposed norms threaten free speech and could be abused to block any inconvenient website online.

Once again, they're trying to replace a pre-court procedure (the notice and takedown mechanism used in the US and Europe) with an extrajudicial procedure for resolving issues of copyright and adjacent rights on the Internet. This is unacceptable.

Popova noted that the proposed legislative changes would only make things worse for everyone on the market, including copyright holders.

While it is unclear which of the several lawmakers who authored the new bill were behind these changes, AIN.UA reports their sources suggest the controversial changes were pushed by companies participating in the “Clear Skies” initiative—a project started in June 2013 by Ukraine's largest media companies to combat the illegal use of video made by their media production facilities in the Ukrainian online space.

One project of the “Clear Skies” initiative was to allow websites to host their video content for free on the condition that all advertising revenue would go to the makers of the video (shown through proprietary embedded players), with none left for the online platforms. In cases where websites hosted their videos without permission, the media companies agreed to pursue take down demands and, in extreme cases, legal action. Another idea mulled by the media holdings was to create a sort of “whitelist” of online resources to single out law-abiding media websites. So far, however, the initiative has only drawn attention to the “worst offenders” with the most pirated content, publishing a top-10 list of popular Ukrainian websites, mostly hosting video content, in December 2015.