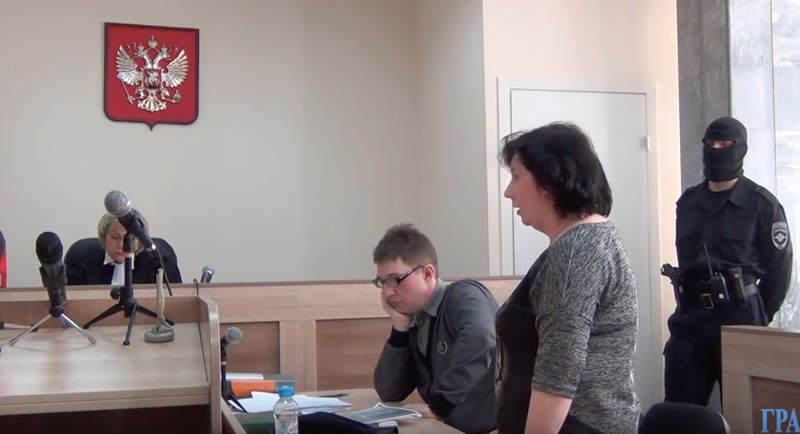 Yekaterina Vologzheninova, speaking in court on the day of her verdict, February 20, 2016. Screencap courtesy of Grani.ru.

A Russian district court has sentenced Ekaterina Vologzheninova, a single mother from Yekaterinburg, to 320 hours of labor for reposting materials critical of Russian aggression in Ukraine on social media. This is the latest of a string of prosecutions of Internet users in Russia who have been critical of Russian actions in Ukraine on social networks.

A court in Yekaterinburg has found 46-year-old Yekaterina Vologzheninova guilty of “discrediting the political order” and of “inciting enmity” by reposting or liking material critical of Russia’s annexation of Crimea and the conflict in Donbas on Russian social network VKontakte. According to Russian news website Grani.ru, the judge also ordered Vologzheninova’s laptop to be destroyed.

Vologzheninova was first approached by law enforcement in December 2014, when officials from the Russian Investigative Committee searched her apartment and confiscated her laptop and other devices. She was later questioned and charged with “inciting hatred and violence” by means of her online posts and reposts, with officials citing Article 282 of the Russian criminal code.

The content that the Investigative Committee took issue with includes Vologzheninova's VKontakte posts that contain links to material about recent political events in Ukraine, including the Euromaidan protests and their aftermath. She also reposted several poems and posts where Russians are generally described as “permanent slaves in body and soul.” The prosecutors specifically accused Vologzheninova of sharing links to documentaries and TV programs about events in Ukraine, including “The Winter That Changed Us” and the TV show “Brave Hearts,” noting that the materials she reposted “incited hatred and enmity towards representatives of Russian authorities and towards Russian volunteers who fought on the side of the militia in eastern Ukraine.”

Vologzheninova’s lawyer Roman Kachanov has stressed that his client simply reposted materials published by others on the Internet without making any changes to them or commenting on them. Vologzheninova herself told Open Russia in January 2015 that she didn't think the content she reposted contained any incitement to “national hatred or calls to extremism” and that she was only “interested in a point of view alternative to that which the Russian federal channels are showing.” The court's “psycho-linguistic expert analysis,” however, led the judge to side with the prosecution.

Writing for independent opposition website kasparov.ru, commentator Kseniya Kirillova says Vologzheninova's sentence was likely only limited to 320 hours of hard community labor instead of prison time because of her single-mother status and a broad public awareness campaign. Community labor usually encompasses some form of physical work (e.g., cleaning the streets) for agencies in the sentencing jurisdiction as a substitution of other judicial sanctions, such as incarceration.

Kirillova's commentary on the case underscores its many procedural violations, such as arbitrary use of linguistic analysis (performed by a single Federal Security Services expert and based on a handful of images and posts), the faking of the defendant's signature under her interrogation protocol (according to the defendant herself), and the refusal of several of the witnesses in the case to stand by their initial testimonies.

Kirillova also notes that the indictment in the case reveals quite a lot about the ideology behind the latest string of prosecutions brought against online critics in Russia. Accusing Vologzheninova of negative and “emotionally charged” statements about “the Russian authorities, the political course of modern Russia, the Russian president as the state's top figure and the embodiment of power in Russia” essentially means that criticism of authorities in Russia is now officially a criminal act, Kirillova writes. “Dialogue or exchange of opinions” are also considered a crime, especially if those engaging in the exchange show their emotions, Kirillova notes, quoting directly from the text of the indictment.

In December 2015, 35-year-old Vadim Tyumentsev, a Russian blogger from the Siberian city of Tomsk, was convicted of hate speech and calls to extremism online and handed a five-year prison sentence for publishing videos with calls to peaceful protest and critical comments about Russian military involvement in Ukraine and pro-Russian separatists. Tyumentsev, who had spent most of 2015 in detention, was declared a political prisoner by the Russian Memorial Human Rights Centre in November 2015.

Also in December 2015, a court in Krasnodar found Russian activist Darya Polyudova guilty of “public calls to separatism and extremism” on social media (including posts and reposts of content on social networks) and sentenced her to two years in a penal colony.