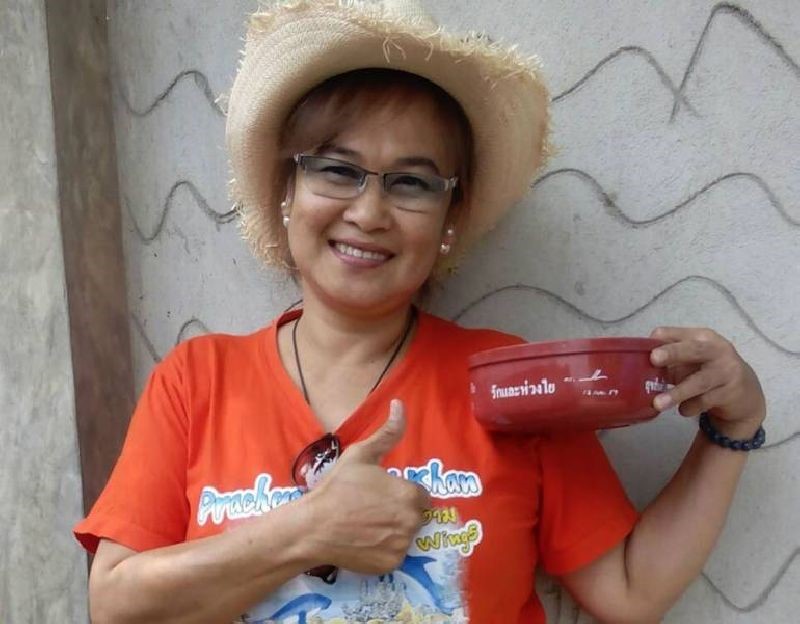 After posting this photo on Facebook, the person holding the red bowl was charged with sedition. Source: Human Rights Watch

A Facebook user in Thailand was arrested and charged with sedition for posting a photo of a red bowl given to her by ousted former Prime Minister Thaksin Shinawatra.

The bowl, one of many that were once distributed among Thaksin's supporters in northern Thailand, is intended to be used during the traditional water ceremonies in the Songkran festival, also known as Thai New Year, this month.

Thaksin was deposed in a coup in 2006 although he remained popular among voters. He went into exile to avoid detention after he was found guilty of corruption. In 2011 his younger sister, Yingluck, was elected prime minister. The army then removed her from power in May 2014 and continues to lead the country through its appointed officials. It promised to restore civilian rule once it implemented political and electoral reforms, but this has yet to take place.

Many of Thaksin’s supporters are members of the so-called ‘Red Shirts’ which launched massive rallies in Bangkok in 2010. The army has banned public protests, including the activities of the Red Shirts and Thaksin’s party (Pheu Thai party), in the name of political stability.

The army has accused Thaksin of trying to incite division in the country by encouraging his supporters to challenge authorities. Thaksin has denied this charge. Last January, the junta banned the distribution of calendars that bore the photos of Thaksin and Yingluck.

The red bowl photo used as a basis for arresting the Facebook user is etched with this message:

The situation may be hot, but brothers and sisters may gain coolness from the water inside this bucket.

Thai authorities acted quickly and arrested the Facebook user, a 57-year old woman from northern Thailand. She was released after posting a bail of roughly 2,800 US dollars. If found guilty, she could spend up to seven years in jail.

It was [a show of] support for people who have violated laws and run away from criminal charge.

I live in a country where this red bowl is a seditious item & a threat to national security. https://t.co/GULyuXnrc4 pic.twitter.com/mhqtBzD2Zf

Meanwhile, the reporter of a newspaper who broke the story was also ‘detained’ by the army. The reporter was allowed to go home but he was told not to write another ‘misleading’ story.

The army subsequently raided the home of a former politician and confiscated more than 8,000 red bowls from Thaksin etched with this message:

Happy 2016 Songkran Day, this Songkran, I especially miss all my brothers and sisters very much and want to help you solve problems, but before that I would like to send encouragement, love and thoughts.

The red bowls are meant to be distributed in time for the Songkran festival.

The army defended the raid and accused Thaksin of trying to sow confusion by placing his photo and name on the red bowls. For his part, Thaksin urged the junta to focus on addressing the country’s problems and not his gifts to his constituents.

The tweet above features the red bowl and the photos of Thailand's two ousted prime ministers: Yingluck (left) and Thaksin (right).

It is not yet clear whether the government will file charges against leaders distributing red bowls but the army hinted that Thaksin’s allies and members of his party will undergo an ethics course. This is similar to the ‘attitude-adjustment’ sessions given by the army to activists, journalists and politicians criticizing the government.

The ‘red bowl’ issue is cited by activists and human rights groups as another proof of the junta’s ‘intolerance of dissent’. Brad Adams of Human Rights Watch adds:

The Thai junta’s fears of a red plastic bowl show its intolerance of dissent has reached the point of absolute absurdity. When military courts try people for sedition for posting photos with holiday gifts from deposed leaders, it’s clear that the end of repression is nowhere in sight.