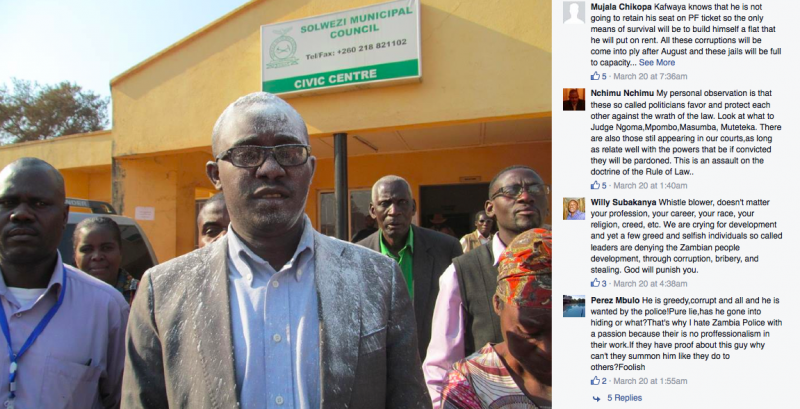 The use of the Internet and especially social media in Zambia has brought communities together and amplified the voices of people who would otherwise not be heard. People are turning to the Internet to voice their disappointments in government and the ruling party, question their leaders and organise political campaigns.

However, inherent in all this new found freedom is not only a fear of being exposed but also fear among leaders of being dishonored or misrepresented.

The most recent example of this dynamic involves the Zambia's Deputy Minister of Health, Dawson Kafwaya and and a bank employee, his once-upon-a-time university buddy, Briven Simaundu. After popular pro-opposition online news site the Zambian Watchdog published a report on its Facebook page in which a police officer alleged that Deputy Minister Kafwaya was being investigated for corruption, the Zambian Post reported that Briven Simaundu responded to the story with a comment that read “the idiot must be caged.” As seen in the above image, Simaundu's was among numerous other negative comments. 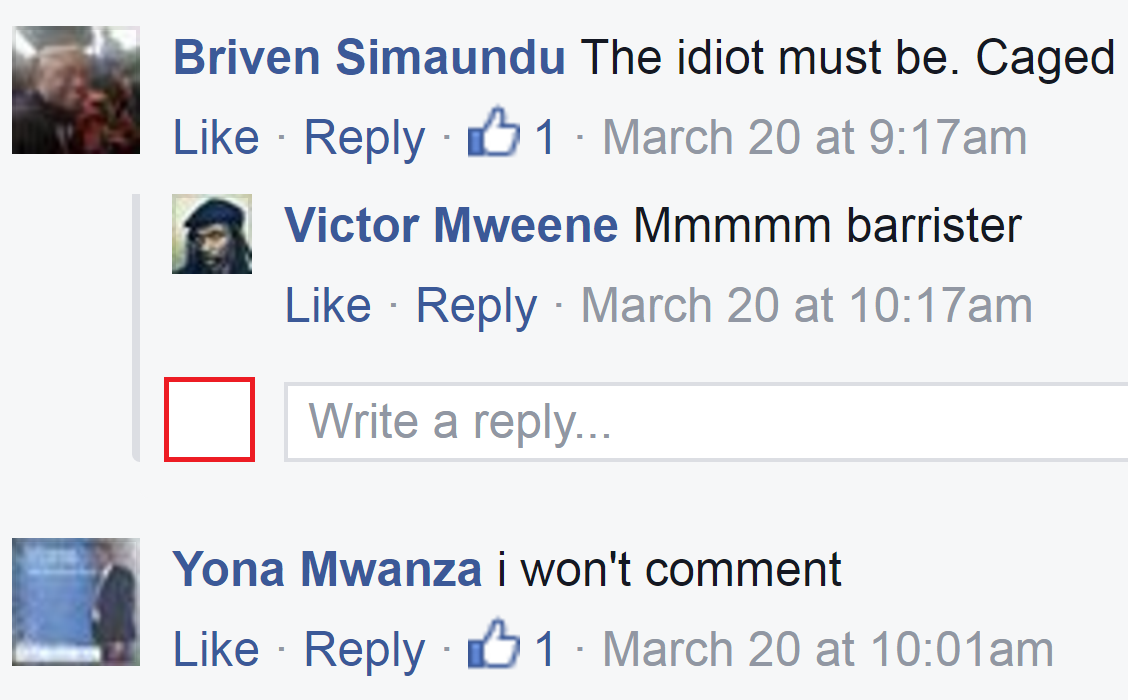 The Zambian Watchdog story claimed that the police and the anti-corruption commission possess dockets against the Deputy Minister but the ‘immunity’ he enjoys from the President has made him untouchable.

Not long after Simaundu made his comment, an irate Dawson Kafwaya stormed the premises of First National Bank where Simaundu works, demanding to see him. The Deputy Minister’s visit reportedly was marked with obnoxious name calling, threats and shouts that shocked clients and security personnel at the bank. Later, a call-out notice (this is a notice requesting an individual to appear at the police station for questioning or investigation) was left at the bank for Simaundu. The call-out, according to the police officers who served it, was for Simaundu to go to the police station and answer questions about the comment he made on the Zambian Watchdog article.

It well known in Zambia that when you receive a call-out to go to the police station and answer questions, chances are good that you will be locked up until you are bailed out.

Since Simaundu told the Zambian Post that he had been visited by Kafwaya at his workplace, he has taken a low profile with hardly any posts on his Facebook wall about the article or the incident.

In 1996, Zambia became one of the first countries in sub-Saharan Africa to censor online content when the government demanded the removal of a banned edition of The Post from the newspaper’s website by threatening to hold the Internet service provider (ISP), Zamnet, criminally liable for the content.

According to Freedom House, US-based organization dedicated to the expansion of democratic systems around the world, the revised Zambian constitution of 2016 recognises freedom of expression including specific protections for print, broadcast, and electronic media freedom.

In April 2014, information permanent secretary Bert Musahala said the government plans to introduce legislation to curb Internet abuse and cybercrime. However, no such law has been introduced yet.

The involvement of the police, the riotous visit by the Deputy Minister and the call-out notice would likely be seen by most Zambians tactic of intimidation against Simaundu. Some people who responded to the article about the Deputy Minister's action expressed fear about openly rebuking or criticizing political leaders. Some argued that it was unwise to call politicians names because you could lose your job and become unemployable.

Responding the article on the Zambian Post acebook page, Patrick Chiyesu wondered what would happen if other government officials such as the President took similar action when they feel insulted on social media:

Mr Kafwaya shouldnt be so agitated, why? If President Lungu was a bad man a lot of people would have been behind bars on treason charges cause of their social media comments. People insult Kambwili [government spokesperson] every day but as talkative and pompous as he is I have never heard him take it personal with any one of them. So Mr Kafwaya dont be angry at the word “idiot”, as a politician you should have a thick skin capable enough to absorb much bigger insults.

On Facebook, Prince Kabaso advised the Deputy Minister to focus on important issues:

It was just a comment, I comment stupid stuff all the time I don't see them storming my house it's just Facebook there's no case here ba [Mr] minister should just concentrate on other more important matters like the welfare of the people instead of following a person over a comment just don't send the police after me for saying this

Mbao Chris noted that the behavior of the Deputy Minister confirmed the observation that he must be caged:

His behaviour has shown beyond any reasonable doubt that he truly must be caged. If the president pursued everyone with a negative comment on social media then half the youths would be in jail.

Francis Brotherton advised both the Deputy Minister and the bank employee:

If Simaundu ends up behind bars or is completely intimidated by this incident, precedent will have been set with regards to how Zambians talk about politicians on social networking sites or elsewhere on the Internet. The freedom Zambians have on social media is worth protecting and fighting for if it is to grow and improve democracy in the country.

No information has surfaced regarding whether Simaundu reported to the police and whether or not he has been charged.