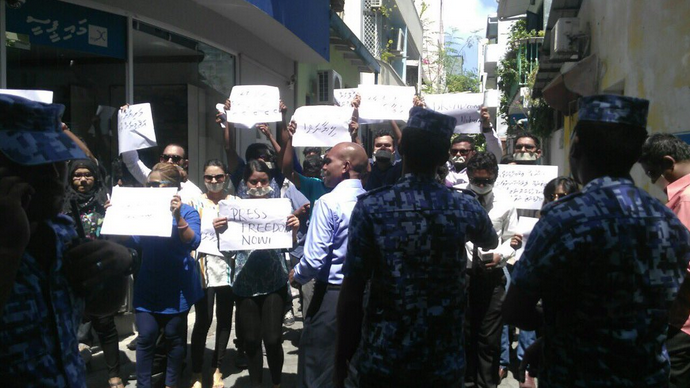 Police in Maldives arrested sixteen journalists [2] on 3 April 2016 amid protests against the government following the official shutdown of the country's oldest printed newspaper. Riot police used brute force [3] and pepper spray and strip-searched [4] both male and female journalists, who hailed from several local media organizations.

Journalists in #Maldives [9] say police have attacked them with pepper spray. (Photos via @ppl_powers [10]) pic.twitter.com/QrQ211yLw7 [11]

About 50 journalists rallied near the president's office on Sunday, demonstrating about a number of issues including the recent court decision [13] to close the newspaper Haveeru, the largest and oldest newspaper in the country, over a contentious ownership dispute. Several of the arrested journalists work at Haveeru. They were carrying placards [14] and chanting, “Stop obstructing press freedom.” 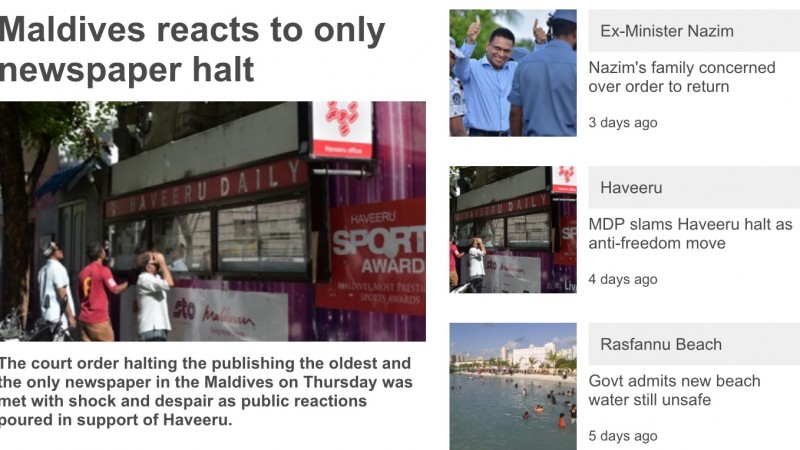 Journalist Ali Naafiz [17] writes about the importance of the newspaper in Facebook:

An institution older than almost half of the population has been killed. The largest written archive in the country has been torn apart. The de facto ‘training institute’ of journalists in the nation has been destroyed. The livelihood of dozens is shrouded in confusion. And above all, thousands have been barred from their primary source of information. If this doesn't concern those in power, I wonder what will? ‪#‎IAmHaveeru‬ ‪#‎IStandWithHaveeru‬

The journalists also demanded that the government reconsider a bill recently submitted to parliament that would criminalize defamation [18] — this despite the fact that defamation was decriminalized in 2009. They fear that the law would be used by journalists’ political opponents to prevent reporting on serious accusations of corruption and the integrity of government officials.

Other issues included the recent restrictions on media coverage [19] of criminal court proceedings, and the government’s failure to protect journalists. There have been no significant progress in the investigation into the 2014 mysterious disappearance of Ahmed Rilwan [20], a journalist, blogger and human rights advocate who once worked with multiple independent news sites.

After a state of emergency was declared on 4 November 2015, Reportieres Sans Frontieres condemned a series of attacks [21] on journalists, TV channels and news websites. Maldives is ranked 112 out of 180 countries in RSF’s 2015 World Press Freedom Index [22].

On Twitter, media freedom advocates pointed to changes in media regulatory agencies in the country that appear to give the ruling party increased power over television and radio broadcasters:

The crackdown also has sparked outrage on social media and people took to social media to share the images and videos of the protests:

Salute to the brave journalists who are fighting for press freedom. #JournalismNotACrime [28] pic.twitter.com/dlEJhbd9n4 [29]

Those detained have not been served lunch nor given any food and were given only hot water to drink. #JournalismNotACrime [28]

All the journalists were released [46] hours after being arrested. Among them was Haveeru reporter Ali Naafiz. [47] After his release, he wrote on Facebook:

If being pepper sprayed at close range, and spending almost 12 hours in police custody with nothing to eat except on demand and sharing a 25 by 18 foot cell with 17 men is what it takes for us to get our voices heard, I, for one, am prepared to do it again. Thank you everyone for the support and well wishes. ‪#‎IAmHaveeru‬ ‪#‎IStandWithHaveeru‬.

The US ambassador to the Maldives met some of the protesting journalists and tweeted about it:

Appreciated the opportunity to meet with #Maldives [9] journalists arrested during Sunday's protest. pic.twitter.com/nYjmaMitN9 [48]

The island nation of Maldives, which is famous as a tourist destination, became a multiparty democracy in 2008 after many years of autocratic rule. However, political unrest has escalated since the alleged coup that toppled the country's first democratically elected leader, Mohamed Rasheed.

Did any good come out of the recent protests by the journalists? Perhaps. Although the reasons behind it were unclear, two individuals were arrested on Tuesday [50]. in connection with the disappearance of Ahmed Rilwan Abdulla, who has been missing for 606 days.