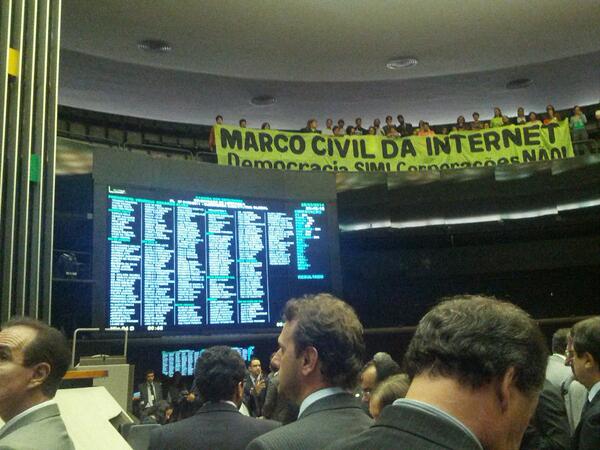 A screen shows the vote tally as activists cheer for the bill from the upper level of the Chamber. March 2014. Photo shared by Carolina Rossini via Twitter.

Brazil's Congress is considering a new suite of legislation that would seriously harm freedom of expression online in the country. The result of a final report of the parliamentary Inquiry Commission on Cybercrimes (CPI dos Crimes Cibernéticos), the draft amendments have prompted widespread criticism from digital rights defenders.

Brazil rose to international attention in the area of digital rights after approving the Marco Civil, a ‘bill of rights’ for the Internet that explicitly protects the right to free expression online and guarantees network neutrality and data protection. The bill was developed by technology law experts through an open consultation process with civil society, a novel approach both in Brazil and globally. Though it was approved in 2014, in what many saw as part of a political response to the Snowden revelations, it has since suffered multiple attempts of alteration. This is the most significant so far.

The report proposes amendments to the Marco Civil that would require websites and social networks to take down defamatory content — i.e. posts that prove “harmful to personal honor” — within 48 hours of receiving notification from a claimant or person affected by said content. Websites could face civil and in some cases criminal penalties if they fail to oblige the request. The amendments also stipulate that websites and social networks must monitor user activity in order to prevent such content to be replicated across the web, an all but impossible task.

Currently, the Marco Civil only penalizes websites if they fail to remove non-consensual intimate images or videos. In all other cases, claimants must submit a court order to a company in order to have a piece of content removed from its website.

This particular amendment also marks a departure from multiple defamation law regimes in South America, in that it offers the same level of protection against defamation to private individuals as it does to public figures. In joint statement signed by 50 digital rights Brazilian and international organizations, advocates said that such a change would generate “chilling effects” on freedom of expression:

This proposal is ambiguous and may allow individuals, potential victims, and their legal representatives to request content takedown[s] directly to the platforms.

A petition released by the Institute for Technology and Society Rio, a digital rights group, with more than 10,000 signatures so far, says:

If somebody insults a politicians on a social media platform, the platform will be obligated to remove the content in a maximum of 48 hours. If it doesn't, the company will be co-responsible for that content and will have to compensate the offended politician. In other words, social media companies will become permanent agents of vigilance and censorship of its users.

Another amendment would allow courts to demand ISPs to block access to applications that are involved in a criminal investigation.

This procedure would allow a judge, for example, to forbid access to P2P networks or hamper access to new technologies and implement a digital obscurantism unnacceptable for a country that wants to advance in the informational era.

And yet another proposed alteration to the Marco Civil would require ISPs and application providers to reveal user's IP addresses to law enforcement agencies without a court order. Currently Brazilian Law allows law enforcement agencies to have access, without a court order, to a user's personal address and parents’ names. The proposed change would include IP address in that data. Marco Civil is clear that IP addresses should only be provided with a judicial order.

The proposal also recommends broadening the concept of the crime of “invasion” or unauthorized access to electronic devices so that any invasion, regardless of motivation, would be considered a crime. Currently Brazilian Law considers this a crime only if it can be proven that the intention was to destroy data without authorization of the device's owner.

The report's author, federal deputy Espiridião Amin from the conservative Progressive Party, says that “it's necessary to find a solution that balances freedom, innovation, free enterprise and security. It's unacceptable that gangs make use of these applications to perpetrate crimes and authorities have no access to those systems.”

The report should be submitted to a final vote on the commission on 12 April. If approved, the proposed bills will be debated in Brazil's lower house of congress.