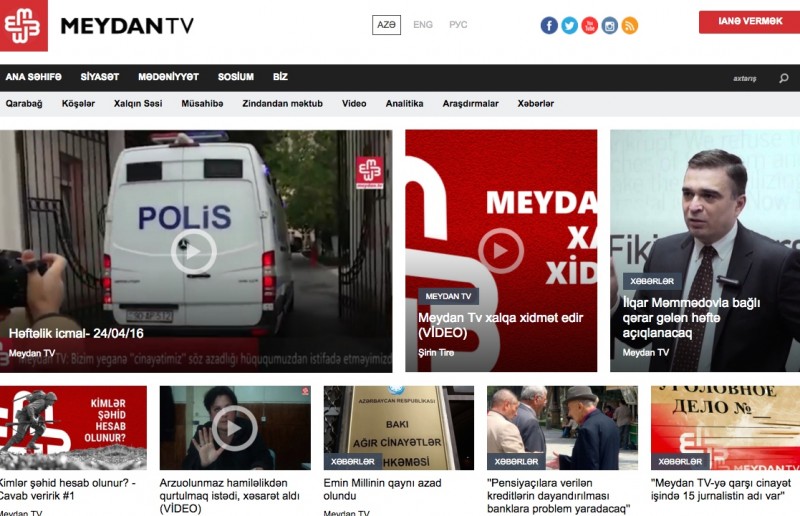 A strategically-placed oil-producing state in the Caucasus, Azerbaijan hosted the European Games last year, and despite some of the worst authoritarianism in the ex-Soviet region retains healthy relations with the West.

But for what remains of its independent press and beleaguered opposition, life in the country is much more reminiscent of the “Hunger Games” film and book series than any glitzy sporting event.

The probe alleges the outlet is guilty of illegal profiteering and large-scale tax evasion according to the lawyer representing it Elchin Sadigov.

A day later, on April 21, the prosecutor's office named 15 individuals in the criminal investigation launched against Meydan TV, some of whom are journalists based in Azerbaijan.

While no one has been officially charged, a number of Meydan TV reporters are facing travel bans and have been questioned.

Along with the Azeri service of Radio Free Europe/Radio Liberty (RFE/RL), multimedia Meydan TV is one of the few outlets providing regular coverage of the Azeri rights crackdown from inside the country.

The outlet's founder and leader Emin Milli spoke out against the charges on Meydan TV:

We declare yet again, by opening this absurd criminal investigation the government of Azerbaijan is creating barriers to freedom of speech, and journalism activity, as well as suffocating democratic environment. Meydan TV rejects all the allegations and has no intention to stop its work.

Disclaimer: the author of this post is former English language editor of Meydan TV and a regular contributor to the website.

Such heavy handed probes into the activities of independent journalists marks a return to normalcy following the release of 14 political prisoners ahead of President Ilham Aliyev's visit to Washington DC to attend the Nuclear and Security Summit.

Aliyev inherited the presidential throne from former communist boss and father Heydar, and has shown even less regard for freedom of expression and other basic human rights.

As the country's economy suffers under the strain of low oil prices, the regime has looked ever more like the brutal game designers envisioned by American author Suzanne Collins, and later turned into a series of popular films.

Meydan journalists have faced scaled-up persecution since 2014 — the year when global prices for Azerbaijan's main export shrank by half — with detentions, impromptu tax inspections, and other forms of harassment in the last two years.

According to the Index on Censorship's senior advocacy officer Melody Patry:

Meydan TV and its staff have been ruthlessly targeted by Azerbaijani authorities. The charges invoked against Meydan TV are of similar nature to the charges that were used to send [other] journalists and government critics to prison. This investigation confirms the government has no intention of changing its approach toward independent media and free expression in the country.