Uganda's Defiance Campaign Will Not Be Televised 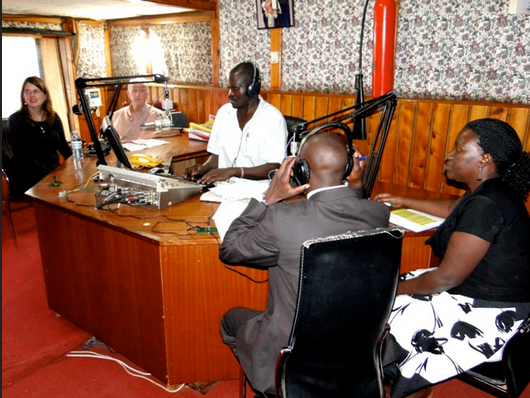 Electronic media houses in Uganda such as this one, Voice of Tooro FM, might lose their licenses for broadcasting the opposition's Defiance Campaign. Creative Commons photo (CC BY 2.0) by the U.S. Mission Uganda.

Less than a week since Ugandans celebrated World Press Freedom Day, Minister for Information and National Guidance Jim Katugugu Muhwezi has banned media houses from covering opposition protests, which their organizers are calling a “defiance campaign”. The demonstrations are organised by Kizza Besigye, the leader for the Forum for Democratic Change (FDC), the country's main opposition party.

Addressing members of the press, the minister said the ban on the live coverage of FDC's activities will be implemented by the Uganda Communications Commission as well as the police, and that any electronic media houses covering the opposition's campaign will lose their broadcast licences. He did not say anything about coverage by print media.

The executive director of the Uganda Communications Commission, Godfrey Mutabazi, warned social media users saying, “The ban may be extended to social media, if it is used as an alternative tool for propagating [the] defiance campaign.”

Meanwhile, the defiance campaign organizers plan on using weekly prayers and public demonstrations to demand an independent audit of the 2016 presidential results. The controversial elections, which took place on February 18, saw President Yoweri Museveni win his fifth term in office with 60.75% of the vote, while Kizza Besigye took 35%. Besigye and his supporters claim that the election was rigged. International observers and human rights groups also criticized the election process.

A local court has ruled that that the defiance campaign is illegal. The court ruled that carrying out the defiance campaign with the aim of obtaining control of government stands in violation of the Ugandan constitution. It should be noted that the objective of the campaign is not to directly overtake the government, but rather to challenge election results through public protests. The Uganda Law Society has criticised the ruling, arguing that the court only heard from one party to the issue, the Attorney General. The FDC says that it will not respect the court order.

The online community has reacted to the ban using two Twitter hashtags, #PressBan and #UgandaMediaGag.

Some Twitter users pointed out the irony of the ban's timing, while others were keen to see the media's next move:

Hot on the heels of #WorldPressFreedomDay comes #UgandaMediaGag. Ironic

Eager to see how the media responds to this #UgandaMediaGag. Will it ban coverage of govt/ruling party activities?

Others simply mocked the government's decision:

You have a right to remain silent. Your tweets can be used against you in the courts of law. #PressBan #UgandaMediaGag #FreeMyVote

Referring to the minister's threat to online journalists, this Twitter user wrote:

Finally, US Mission Uganda was bemused by the move:

Citizens of Uganda should be able to decide for themselves what information to use to make informed choices about their country.