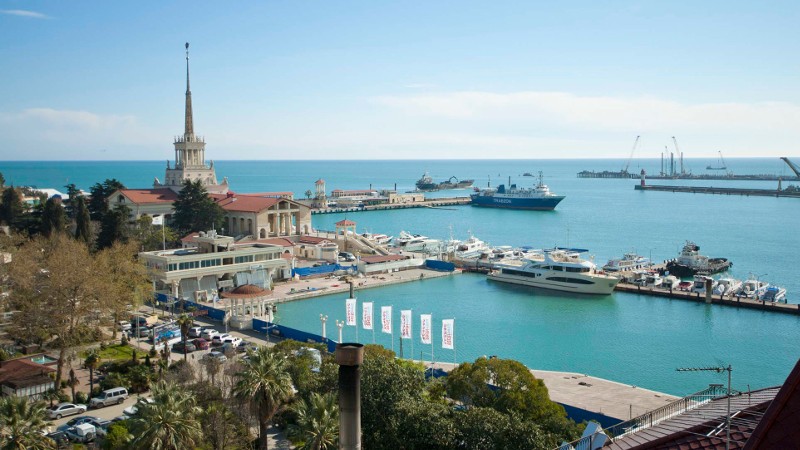 The Sochi seaport, one of the many real estate objects in the Sochi area that benefited from the renovations before the 2014 Winter Olympics. Photo by Roman Ganoshenko, CC BY-SA 3.0.

Russian blogger and journalist Aleksandr Valov, editor of BlogSochi website, has been arrested while working with an HBO film crew near the southern Russian city of Sochi. The journalists were reportedly investigating claims of misuse of real estate properties constructed during the 2014 Winter Olympic Games.

The blogger's lawyer reports that a court in Adler charged him with “organizing a public event in a near-border zone.” Valov is to remain in jail for five days.

Valov was detained on June 3 near the border between Russia and Abkhazia together with another Russian journalist, Dmitry Saltykovsky, and a six-person film crew from US channel HBO. Initially, law enforcement claimed they were operating in a near-border zone without “necessary permits.” The US citizens were released after seven hours, while the two Russian journalists were detained further and transported to the FSB headquarters in Sochi.

Dmitry Saltykovsky, who worked as an interpreter for the HBO crew, was released, but fined 1,000 rubles ($15), according to the journalists’ lawyer, Alexander Popov, on Twitter.

The HBO journalists and their Russian counterparts were in the Sochi area to film some of the buildings from the Olympic “heritage fund” which the Sochi city administration officials had reportedly put up for sale in an auction, despite their special status. Before his phone was taken away, Valov confirmed to the Caucasian Knot website that he ahd Saltykovsky were being accused of “organizing events,” but insisted the group was there not to “hold meetings or events,” but to “look at and film the houses that the city's administration had put up for sale.”