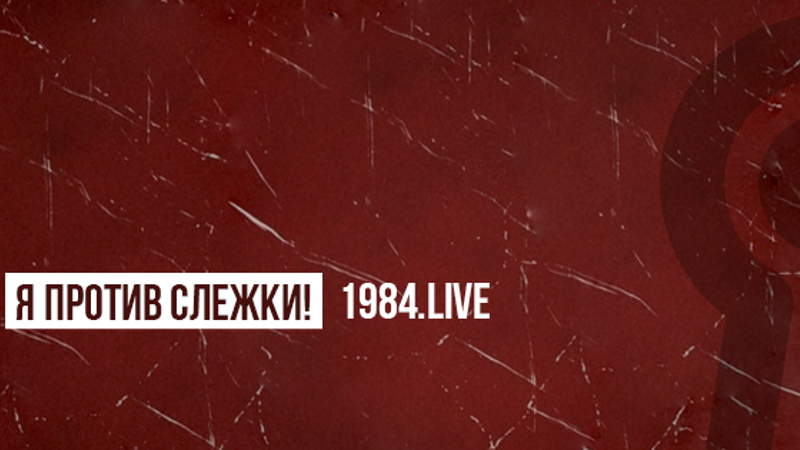 “I am against surveillance!” Fragment of online banner from the RosKomSvoboda campaign against the new “anti-terrorist” legislation that ramps up surveillance over online communications and threatens encryption.

Russian civic activists and Internet companies have been raising the alarm about a new set of “anti-terrorist” legislation amendments that has already passed first reading in the Russian Duma. Those opposing the comprehensive amendments say the new laws are a severe threat to free speech and expression online and offline, as they empower the government and law enforcement to crack down on encrypted communications and beef up existing surveillance measures.

The new “anti-terrorist” laws were drafted by lawmaker Irina Yarovaya and Senator Viktor Ozerov, and were supposed to pass second and third reading on June 22, but the vote was postponed until Friday, June 24. Russia-watching media website Meduza reports that the amendments would affect over ten different laws and would broadly expand the state's powers to control its citizens and limit their civil rights.

If the legislation is approved (which is almost certain), Russia's authorities will gain the power to strip Russians of their citizenship, revoke the foreign travel rights of people convicted of reposting certain “wrong” content online, and access every single telephone conversation and email that crosses Russia's telecommunications lines.

Among the many measures aimed at curbing terrorism and extremism in Russia, the suggested amendments increase penalties for Internet users who “incite terrorist activity and justify terrorism,” raising the maximum prison term for such offences from five to seven years behind bars.

Another worrying measure that has caused much alarm among Russian Internet freedom circles is a norm that obligates telecommunications companies to store user communications and metadata for six months on Russian soil. Communications providers and organizers of “online information distribution,” such as blogging platforms and social network websites, will be obligated to store records of customers’ phone calls or voice data, text messages, images, videos, and other types of content.

Telecommunications companies and Internet service providers will also be required to store the metadata from all messages sent and received between users (such as the information about the time of the exchange, the sender and recipient information, location data, etc.) for three years. All this data must be made available to Russian law enforcement if its agencies require this data for investigative work. If voted into law, these regulations would take effect in July of 2018.

After the first reading of the draft amendments, lawmakers added another norm to the legislation: they propose to curb data encryption online by requiring that all Internet and telecom companies that use encryption for user communications (such as end-to-end encryption in messaging services or the HTTPS protocol on websites) to make their encryption keys available to Russia's Federal Security Service so they can decrypt the communications. Companies that refuse to provide decryption information could face fines of up to one million rubles (over $15,000).

Russian free expression advocates have campaigned against the increased surveillance measures in the proposed legislation, and have said the new encryption resrictions have made the bill “even more dangerous.” RosKomSvoboda, an Internet freedom organization affiliated with the Pirate Party in Russia, set up an online campaign “No to Surveillance,” launching a website called 1984.live at the time of the first reading of the new legislation, and following up with a social media campaign in which users addressed government officials asking them to nix the amendments. RosKomSvoboda also collected over 3,000 signatures for a petition against the law that they submitted to the Russian Duma and the Communications Ministry on June 21, before the initially scheduled second reading of the draft bill.

Over 3 thousand citizens from 79 regions of Russia signed [the petition] against the Yarovaya-Ozerov draft bill.

Industry representatives in Russia have also voiced their concerns about the new laws. A spokesperson for Internet giant Yandex told RBC news website that the proposed requirements for storing user data and the encryption-curbing measures would “lead to increased expenses for Internet companies, and would excessively limit the rights of businesses and users.”