Tanzanian Prosecuted For “Insulting” the President on WhatsApp 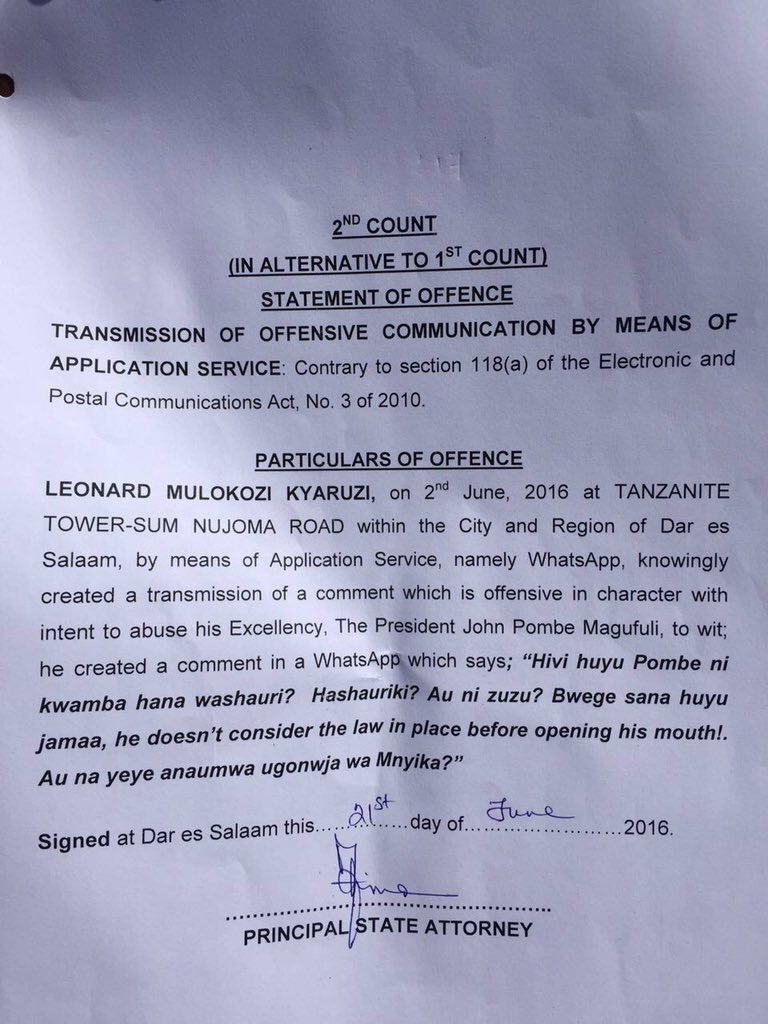 Tanzanian citizen Leonard Mulokozi was charged on June 22 under Tanzania's Electronic and Postal Communications Act over a WhatsApp message that authorities say is “abusive” to Tanzanias president, John Magufuli. Mulokozi denied the charge at the Kisutu Resident Magistrate's Court and was released on bail. The case will come up for mention on July 18.

It is alleged that on June 2 Mulokozi posted the following message, in Swahili, on WhatsApp:

Does it mean this Pombe Magufuli [Tanzanias president] doesn't have advisers? Is he unadvisable? Or is he just a fool? He's real foolish, this fellow: he doesn't consider the applicable laws before opening his mouth; or does he also suffer from an illness like that of [opposition politician] Mnyika?

Mulokozi is the latest victim of Tanzania's relatively new Cybercrime Law, which the Parliament passed in April 2015 to address issues such as child pornography, cyberbullying, online impersonation, illegal interception of communications, and the publication of false information.

Despite widespread opposition from politicians, social media experts, and human rights activists, the bill was pushed through parliament with relatively little discussion or debate. Former president Jakaya Kikwete signed it into law in May 2015.

Opponents of the Cybercrime Act argue that the law gives too much power — without meaningful oversight — to police, bestowing upon them the ability to search the homes of suspected violators of the law, seize their electronic hardware, and demand their data from online service providers. They have also cautioned that police or the state could use their power to harass online activists or social media users.

Emily may serve three years in prison, or alternatively pay a fine of five million shillings (US $2300), a steep sum in Tanzania, where the GDP per capita amounts to just under US $1000 per year. This was reduced from seven million upon appeal by his lawyer, according to local news site The Citizen. He must pay the fine by August 8, or serve the prison term.

In October 2015, two Tanzanians became the first victims of the new law. Benedict Angelo Ngonyani, a 24-year-old student at Dar es Salaam Institute of Technology, was charged for publishing materials which are “false or not verified by relevant authorities.” It is alleged that he posted a Facebook post claiming that Tanzania's Chief of Defence Forces, General Davis Mwamunyange, had been hospitalized after eating poisoned food.

In November 2015, four Tanzanians — Leila Sinare, Godfrey Soka, Deo Soka and Monica Gaspary Soka — were charged under Section 16 of Cybercrime Act 2015 for publishing false, election-related information on the social messaging platform WhatsApp. The four appeared before a Magistrate's court in Dar Es Salaam on November 6, 2015. Public prosecutors alleged that the accused published audio information on a WhatsApp group called the “Soka Group”, that was intended to mislead the public during the October 2015 Tanzanian general elections, which were plagued by accusations of vote-rigging.