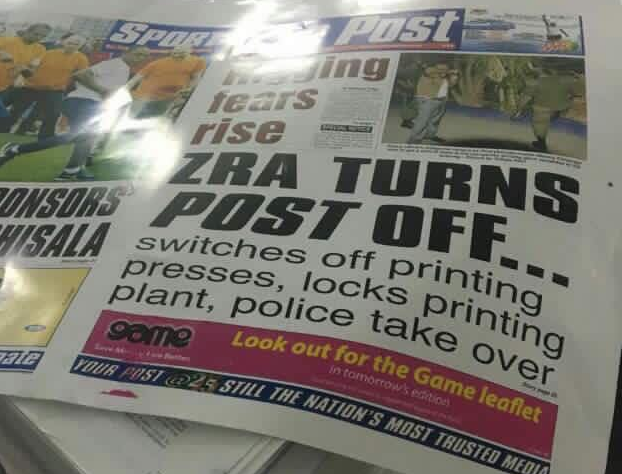 A screenshot of The Post newspaper headline announcing the shutter.

In a new twist following the seizure of assets belonging to the country's main independent newspaper on June 21 2016, Zambian police arrested and released on bond The Post's owner Freddy M'membe, winner of the 1995 CPJ International Press Freedom Award; his wife Mutinta Mazoka M'membe and its managing editor Joseph Mwenda, for allegedly attempting to make forced entry into the newspaper's premises. The officers allegedly beat them up before taking them to the police station.

The three went to The Post's offices to take possession of the instruments necessary to the running of their business, after the Tax Appeals Tribunal ordered the Zambia Revenue Authority (ZRA) to allow the newspaper to resume operations — a ruling which the ZRA ignored. ZRA claims that The Post owes outstanding taxes estimated at K68 million (US$6.1 million), dating back to 2009. The newspaper disputes this amount and has been asking the authorities to reconcile their figures.

The Post is known for its investigative reporting and criticism against successive governments. Some netizens, local and international media organisations and donors have expressed their suspicion about the timing of the arrests and seizing of assets. The United States government released a statement saying that the closure of the newspaper only weeks before these important elections in Zambia is of deep concern. Come August 2016, Zambians will be going to the polls to vote in its general elections; the newspaper has been the main platform for the opposition candidates, as the public media is owned and controlled by the government.

Speaking on behalf of the police, Acting Spokesperson Ray Hamoonga denied reports that the M'membes and Mwenda were beaten up by the police, challenging critics to obtain medical reports from the hospital and, if incriminating, report the incident to any police station in the country. He added one caveat however, saying that the police are allowed to use minimum brutality on individuals who resist arrest.

But his statement has not inspired confidence. Many Zambians routinely question the professionalism and neutrality of the country's police, and often remind them that they are not a force but a service. Zambia's police used to be known as the Police Force, but to change the attitude of the public and foster better working relations, the name was changed to Police Service — therefore, the police fall under a public service entity.

The men and women in Uniform should be challenged on the issue of using minimum force. How much is minimum? Can that be measured? No need for self defence (sic). If the people were emotionally and psychologically abused, what more do the men and women in uniforms require from the trio. Please act professionally and not politically. You are a service and not a force. Maintain professionalism. Just concerned.

Very funny but sad at the same time. Its not possible for the Zebras to report to the Lions about the brutal behaviour of Lions on the Zebras and expect to be positively assisted! The lions will simply be happy to use the Zebra's meat as ‘Colgate’ for cleaning their teeth with.

which police are they going to report to coz zambia police is being controled (sic) by pf [the ruling Patriotic Front]. we no longer trust police coz they are de (the) most corupt people

We are back to one party brutal state! And it will be too late for carders (sic) to realize this!

However, not everyone is on the side of The Post newspaper. Some netizens feel that M'membe is putting on a show to win public sympathy. Mike Mubanga said:

In Zambia, anyone who supports a particular political party is called a ‘cadre’ — especially those who are visibly active. Mubanga's Facebook comment highlights one example of the level of violence that the country has been experiencing in the lead-up to its August elections — and infers that the editor's claim that the police beat him undermined the stories of those who were actually beaten by the police for their political engagement.

He has been advised to get a medical report and the report the assault to the police. If he was really beaten he was going to do that because he claims to be lawyer and he knows how to deal with an assault case.

Brian L. Kasoka attributed the entire saga to a miscalculation on the part of the newspaper's owners:

Mmember's Bitterness Has Gone Too Far Hence Taking Him To Police Custrd (custody) How I Wish He Was Listening To Othr People's Advise, The Post By Now Could Have Been Opened.

Among many, the feeling on the ground is that The Post should pay the money it owes. The ongoing struggle lies in making people aware of the importance of having sustainable independent media that can communicate an unbiased perspective — in this election year and beyond.