Teo Soh Lung (left) and Roy Ngerng, another activist who has been investigated for political activities. Photos from International Service for Human Rights and The Heart Truths (Roy's blog).

When Singaporean police interrogated political activist and civil rights lawyer Teo Soh Lung, and searched her apartment and electronic devices without a warrant, Soh Lung spoke up. She wrote about the May 2016 incident on Facebook, and her lawyer posted video of the search on YouTube. The posts went viral.

But Soh Lung's most recent Facebook post about the incident met a different fate: censorship. Soh Lung reported that her post (see below) denouncing abuses of power by police in Singapore was removed by Facebook for ‘violating community standards.’ 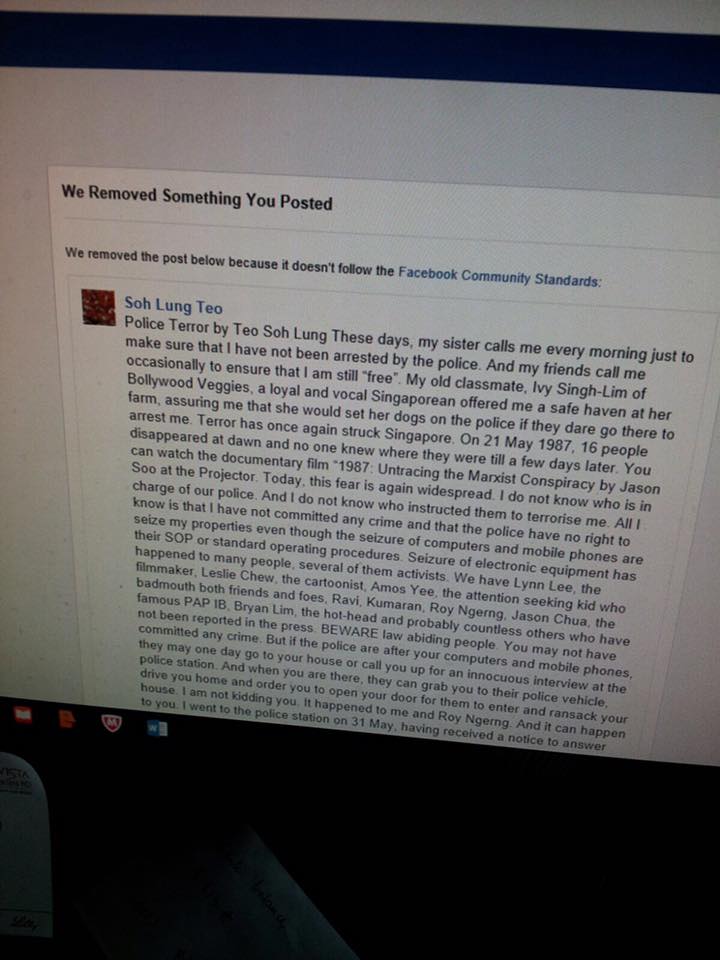 Police had investigated Soh Lung along with fellow activist Roy Ngerng “for publishing several online articles and postings that may be tantamount to election advertising” on the day prior to election day to “reflect rationally on various issues raised at an election before heading to the polls.” Campaign advertising is also banned on election day. These restrictions apply mainly to online news outlets, not individuals. Soh Lung and Ngerng suspected that they were targeted by authorities because of their previous political activism.

Teo Soh Lung published her most recent post on the Facebook page of Function 8, a socio-political website, describing her encounter with police in late May. Her post (some of which is pictured above) continued:

The police have robbed me of my properties and gravely inconvenienced me. They have mined my data. They have seen and read all my private documents and know who are my friends. They have invaded my privacy. They have committed a crime. I am angry. But where is my recourse? We do not have a national human rights institution which our so called less developed neighbors have – Malaysia, Indonesia, Thailand and Myanmar.

This is my Singapore. This is your Singapore. We are a police state. For the slightest irritation, Singaporeans run to the police. But when the police commit a wrong, where do we run to?

Latest post by Soh Lung in this page was automatically unpublished by facebook!! Those people who shared that post also have theirs removed automatically from their walls.

I have joined rank with Andrew Loh. My latest post on F8 facebook and which I shared here has been removed by facebook. It is titled “Police Terror”.

Indeed, this is not the first time a post criticizing Singapore authorities has been censored on Facebook. Soh Lung cited the case of blogger Andrew Loh whose post criticizing the policies of the Singapore government was also removed on Facebook. He was also blocked from accessing Facebook for three days. Subsequently, Facebook apologized for the ‘accidental’ removal of the post and the three-day blocking of Andrew Loh from the social networking site.

Soh Lung has been given no further information about why her post was removed. Facebook's automated message states that it violated the company's “Community Standards,” but did not specify which of the standards was violated.

Soh Lung re-posted the message on her personal page:

I am testing if there is a computer glitch on FB side since I don't know where to write to in order to complain about the removal of my earlier post.

Singapore-based blogger and Global Voices author Kirsten Han suspected that other users might have complained or reported the post using Facebook's “Report Abuse” mechanism. She is worried that it could be a “new tactic to silence” criticism in Singapore:

It's bizarre that Facebook would remove a post about police powers and due process in Singapore because it violates community standards – what standards have been violated here? Then again, it's not the first time – I had a post removed ages ago, and it happened to Andrew Loh recently.

It is possible that the post was removed because it was reported by a large number of people….If this is the case, then it's troubling how this could be a new tactic to silence.

Facebook policy documentation asserts that the company does not remove posts based on the volume of abuse reports that they receive. Any post that has been reported for abuse is said to be reviewed by a real person, who determines whether or not it violates the Community Standards.

It is possible that Soh Lung's post was removed in keeping with Facebook's standards regarding “Attacks on Public Figures.” Their policy on this issue reads:

We permit open and critical discussion of people who are featured in the news or have a large public audience based on their profession or chosen activities. We remove credible threats to public figures, as well as hate speech directed at them – just as we do for private individuals.

Did the company read Soh Lung's post as a “credible threat”? Her reference to a friend pledging to “set her dogs on the police” might have justified this move. On a different note, given that the company is on increasingly high alert regarding terror-related activities on the platform, it is possible that Soh Lung's use of the word “terror” may have triggered the response. Either way, Soh Lung hopes that her future speech on the issue remains online, for all to see.