Ethiopia Locks Down Digital Communications in Wake of #OromoProtests 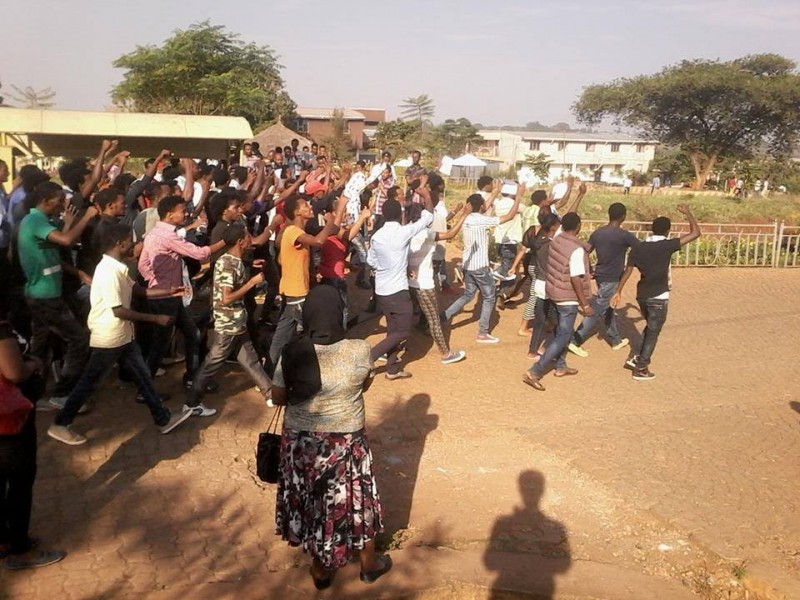 When students in Ginchi, a small town 75 km west of Addis Ababa, organized a demonstration in November 2015, US-based opposition media activist Jawar Mohammed, began posting minute-to-minute ‘live’ updates of the protest on his massively popular Facebook page, which has over 500k followers.

What started as a small-scale student protest over Ethiopian government's plan to expand Addis Ababa into adjacent farm lands of Oromia, Ethiopia’s largest constitutionally autonomous state, evolved into a series of largest and bloodiest demonstrations against Ethiopian government in a decade leaving at least 400 people killed, many more injured, and thousands jailed.

Along with Jawar’s live updates about the protests on Facebook, netizens saw a flood of digital photos, videos, blog posts, and tweets on other social media platforms coming from inside Ethiopia, mostly under the hashtag #OromoProtests.

For over a decade, the Ethiopian government has been violently cracking down on protesting students in Oromia, but these incidents have never garnered the online attention they did this time around. With scant coverage by foreign media from the front lines, and silence and misinformation coming from Ethiopia’s largely pro-government media outlets, the Internet emerged as the main channel used to disseminate information about protests. Jawar’s Facebook page and Twitter feed became the official-yet-unofficial story of the protest, leading diaspora writers to identify Jawar as a key shaper of public opinion on the events.

Though these networked communication dynamics are commonplace in many parts of the world, they are novel in Ethiopia, where Internet penetration hovered just below 5% in 2013, which is the last time that Internet access data was collected there by the International Telecommunication Union, a UN agency.

The steady stream of #OromoProtests content triggered various attempts by the government to limit digital traffic and block telecom services in Oromia.

In a bid to quell the growing role of social media in magnifying the stories of protests and to regain the upper hand, Ethiopia’s state-owned telecommunication monopoly EthioTelcom blocked social media platforms including Twitter, WhatsApp and Facebook Messenger in Oromia for at least two months. Around the same time, EthioTelecom also announced plans to begin charging customers for using popular voice over internet protocol (VoIP) applications such as Viber, Facebook messenger, Skype, and Google hangouts.

According to local media reports, EthioTelecom plans to enforce a new price scheme for VoIP data usage by deploying technologies that will more heavily regulate data plans and what kinds of apps operate on devices of each subscriber active on EthioTelecom network. In an unprecedented move, EthioTelecom also announced a plan to track, identify and ban mobile devices that are not purchased from the Ethiopian market. This move will allow EthioTelecom to keep a track of exactly what data is being sent to and from each subscriber active on the network. It remains unclear exactly how this technology will work, but it unquestionably demonstrates EthioTelecom's intention to take full political advantage of its monopoly.

Despite being one of the poorest countries in terms of Internet penetration in Africa, #OromoProtests garnered wall-to-wall coverage by the US based Ethiopian diaspora satellite television stations, particularly OMN and ESAT. Both stations picked various stories of #OromoProtests from social media and rebroadcast them to millions of Ethiopians living off the grid of mobile phone infrastructure.

To top all this off, on the heels of the protests, the parliament passed a stringent computer crimes law that looks very much like an effort to criminalize protest-related online speech and to more effectively utilize digital communication as a tool of public surveillance.

In a critical piece about the new law, the Electronic Frontier Foundation wrote,

Ethiopia's prosecutors have long demonized legitimate uses of technology, claiming in court that the use of encryption, and knowledge of privacy-protecting tools is a sign of support for terrorists….By criminalizing everyday actions it ensures that anyone who speaks online, or supports online free expression, might one day be targeted by the law…. [This regulation] will intimidate ordinary Ethiopian citizens into staying offline, and further alienate Ethiopia's technological progress from its African neighbors and the rest of the world.

According to reports, the new legislation further limits already-diminished digital rights such as freedom of expression and privacy, criminalizing and levying severe punishments for defamatory speech online. The legislation also obliges service providers to store records of all communications along with their metadata for at least a year.