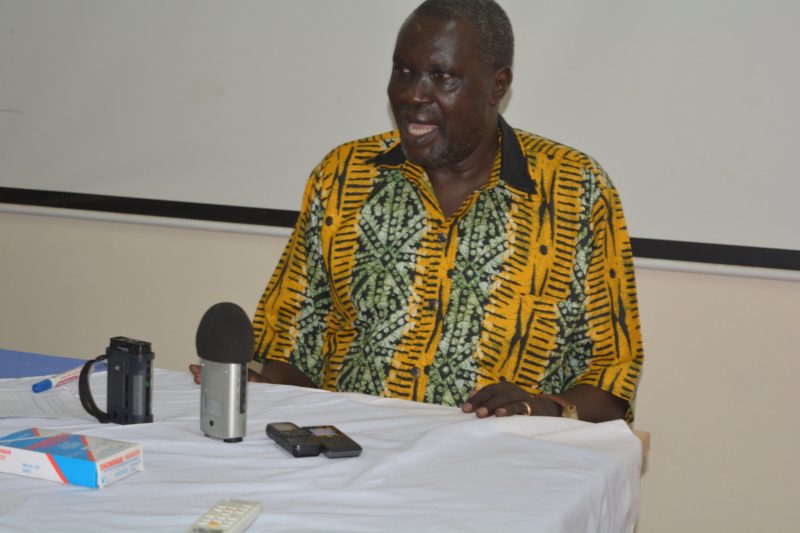 Alfred Taban. Image shared widely on Twitter, by the Association for Media Development in South Sudan.

Amid the sudden return of violent internal conflict in South Sudan, media veteran and former BBC correspondent Alfred Taban was arrested on July 16 by agents from South Sudan’s National Security Service (NSS). Shortly before his arrest, Taban called for the removal of both President Salava Kiir and Vice President Riek Machar in an editorial Taban wrote for the Juba Monitor, where he serves as editor-in-chief.

The long-standing tensions within South Sudan’s so-called “transitional” government reached a boiling point earlier this month when misinformation concerning a meeting between President Salva Kiir and the Vice President Riek Machar triggered an armed conflict that lasted for several days and left hundreds dead. Many are comparing it to December 2013, which marked the beginning of a new period in South Sudan’s history of increased political instability, despite having maintained relative peace since the signing of the Comprehensive Peace Agreement between South Sudan and Sudan in 2005.

On July 22, Taban was charged with ‘publishing or communicating false statements prejudicial to Southern Sudan’ and ‘undermining the authority of or insulting the president’. Journalists and human rights advocates in the region have been advocating for authorities to release Taban and drop all charges against him, with many using the hashtag #FreeAlfredTaban. Taban was released on bail on July 30.

Taban's arrest attracted the attention of the international community with several demands to the South Sudanese authorities, among others to either charge those who’ve been detained, or to release them. Taban’s detention has raised particular alarm, as he was once a member of the South Sudanese People’s Liberation Army/Movement (SPLA/M), the entity that has now detained him.

In March of this year, Taban highlighted the paradox in an conversation with The Intercept:

The same people — the leaders — who would have me arrested today are the people I was arrested with [back then]. It’s as if we struggled for nothing.

One journalist reminded Global Voices that though Alfred Taban is one of South Sudan’s most prominent journalists, he is not the only journalist who has been detained by NSS and held without charge:

You should also know that we have (another) journalist inside for almost two years George Livio. He was arrested during the problems in Wau then referred to Juba. Since then he is [has] been there.

In August 2015, a young journalist named Moi Peter Julius was shot in the back with a pistol at close range by an “unknown gunman.” The killing took place shortly after President Salva Kiir had threatened to kill journalists for reporting “against the country.” A few days later, the president’s spokesperson withdrew the statement, saying that Kiir did not mean it “that way.”

The media and civil society have long struggled to survive in Sudan and South Sudan, but the impact of the conflict that erupted in 2013 has made working in media even more dangerous. The government released a set of quasi-official (and thus unclear) guidelines of what journalists “should” (and by default, should not) report on. In 2014, officials banned journalists from citing political or militant sources opposing the government. 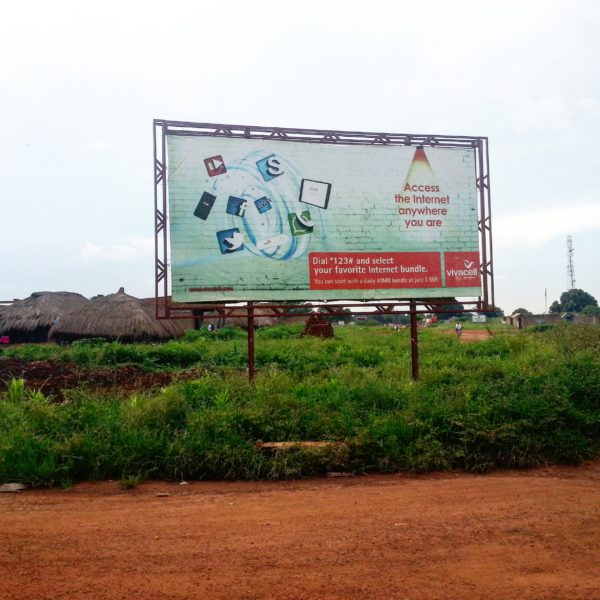 ‘Access the Internet anywhere you are’ says this Vivacell billboard, posted in the small village of Morobo on the border with Uganda in 2015. Only a small minority of South Sudanese have decent Internet access. Photo by Pernille Bærendtsen.

Though South Sudan has passed bills on public broadcasting and media oversight authority in order to ensure citizens’ access to information, the bills have not been implemented. In the meantime, authorities have implemented the National Security Service (NSS) Act of 2014, which Amnesty International described as follows:

The NSS Act of 2014 grants the NSS sweeping powers to arrest and detain, without ensuring adequate judicial oversight or safeguards against abuse of these powers….The law effectively gives a carte blanche to the NSS to continue and extend its longstanding pattern of arbitrary detention, with total impunity.

Alongside increasingly restrictive legal measures, journalists report that they receive threats, often from a person calling from an unknown number telling them to stop writing.

This difficult media climate alongside a slow but steady increase in Internet and mobile phone use has led citizens to rely more heavily on major social media platforms, chiefly Facebook, for information. While this shift has had some positive effects, it also has increased the potential for the spread of misinformation and political propaganda. 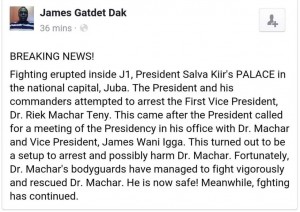 Many are attributing the July 8 violence to a message sent by Vice President Riek Machar’s spokesman James Gatdet Dak (and later posted on Facebook, see above), in which Gatdet falsely suggested that Machar had been detained while at the presidential palace. Machar was in fact meeting with the president. Some believe that it was this rumor that first caused Machar loyalists to open fire outside the palace.

The South Sudanese diaspora, which in some cases tends to divide along ethnic lines, has also played a significant role in contributing to such narratives on social media. One such sample is the narrative which gradually built up on social media in the last days of December 2013, that 25,000 of ethnic Nuer militia fighters, ‘The White Army’, were marching to attack the ethnic Dinka in Bor Town. The narrative was not accurate, but it spread massive fear in local communities surrounding Bor. 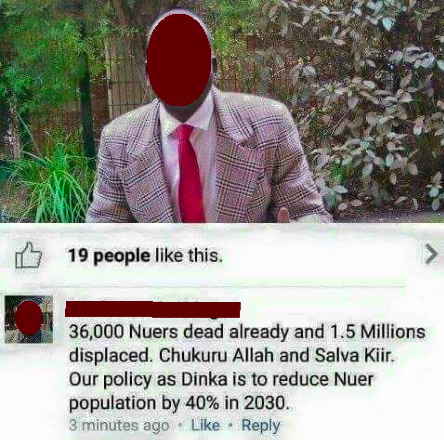 An anonymized sample of hate speech, used with permission from the #defyhatenow project.

On July 10, South Sudanese security and development analyst Jok Madut Jok, who is also co-founder of the Sudd Institute, wrote on Facebook:

Listen folks, South Sudanese in the Diaspora, please stop commenting on social media about what is going on in Juba right now. You know no shit about this….just try to find your relatives on phone, check on them to see if they are safe, help them in whatever way you can, and then shut the fuck up. You are not helping whatsoever. I'm not trying to suppress your individual rights to speak all you want, but only asking you to weigh what you say, and do so with a conscience… Every misinformation you peddle will most likely cost us another life. Is it not enough that our leaders have caused us this pain, do you have to add salt to injury?

Matthew LeRiche, a lecturer in conflict, security and development, describes how social media is affecting local conversations and perspectives on the conflict:

Many people in South Sudan, especially youth facing major difficulties in accessing information, are turning to Facebook as a primary source for news and information – and in many cases as their only source. They then pass this information onto others via very effective local word of mouth channels, [which have] greater scope and velocity due to mobile phones. The comments particularly by those in the diaspora, but also many media and other commentators, are then filtered back through communities.

LeRiche goes on to describe how these information flows can sometimes lead to misinformation or even stoke further tension or conflict:

Such sources, especially those with education in the West are seen as authoritative by many back in South Sudan. People then act on whatever information they have since they are in active survival mode and there are few opportunities for verification. The action taken is at best antagonism and at worst overt acts of violence. This dynamic also grants justification to many to act on sentiment or desire that might have been curtailed without a supporting narrative.

South Sudanese journalists have spoken against hate speech, as well as religious leaders, and on July 23 a group of activists got together in Nairobi under the #defyhatenow hashtag in an initiative to combat social media hate speech. The event was initiated by a collaboration between r0g_agency for open culture and critical transformation in Berlin and the Community Empowerment for Progress Organisation (CEPO) in Juba.

Reporters Without Borders’ World Press Freedom Index ranked South Sudan at 111 at its independence in 2011, now it has moved to 140 out of 180 this year. Freedom House rates South Sudan “not free.”