Netizen Report: In China and the Middle East, Pokémon GO is Not All Fun and Games 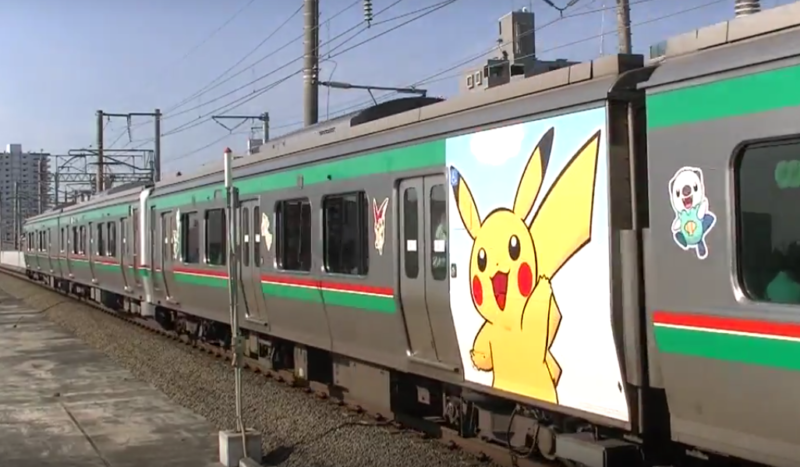 Pokemon decal on a train in Japan. Screencapture from YouTube video by 週に一度は撮り鉄を。 (Japanese trains!), labeled for reuse.

Media outlets have discussed some of the risks of playing the chart-topping augmented reality game Pokémon GO, including reports of players getting into car accidents, falling into the ocean or subjecting themselves to unwarranted police attention. But the game also carries substantial and unique risks in parts of the world where it is not officially available for download.

The game uses Google Maps data to superimpose characters from the Pokémon series into your geographic surroundings. As you walk, your smartphone uses GPS to track your position in the world, and it will know if you get close to one of these characters. You can then capture the character on your phone screen, train it, and then deploy it in the “augmented reality” battlefield that is Pokémon GO.

For example, it is not easy task to catch Pokémon in China. As Global Voices’ Oiwan Lam explained last week, the game is technically unavailable in China’s App Store, which is heavily censored, so Chinese players are climbing the Great Firewall in order to access the game. Some have reportedly spoofed their locations, flooding Japanese servers and taking over the gym at the Yasukuni Shrine, which is devoted in part to memorializing Japan's World War II dead. In response, other religious sites in Japan such as the Izumo Shrine have banned the game.

In Iran, Pokémon GO is technically unavailable for download. Gamers nevertheless are using virtual private networks to download the game, but they have also encountered a general scarcity of characters in major cities like Tehran.

And government ministers in Egypt, Kuwait and United Arab Emirates have issued stern warnings about gamers approaching or photographing government buildings, particularly those that are significant to state security. Kuwait interior ministry undersecretary Suleiman al-Fahd said in a statement that the ministry “informed security men to show zero tolerance to anyone approaching such prohibited sites, deliberately or not.”

As the fallout continues following an attempted coup in Turkey, WikiLeaks promoted and linked to nearly 300,000 files it called “emails from Turkey’s ruling party.” But these files actually contained private information on female voters in 79 Turkish provinces as well as sensitive information for millions of members of the ruling AKP party, including election monitors. The Turkish government responded by blocking WikiLeaks in Turkey, while Turkish netizens quickly realized the leaks contained little information of public interest.

In a piece for Huffington Post, Turkish scholar Zeynep Tufekci criticized the leak:

I’ve long been critical of the AKP’s censorship practices in Turkey and will continue to speak out. But there is not a single good reason to put so many men and women in such danger of identity theft, harassment and worse – especially after the country was rocked by a bloody coup targeting this political party.

The United Arab Emirates federal government will soon tighten existing laws on virtual private networks (VPNs) and other censorship-dodging tools by criminalizing anyone who “uses a fraudulent computer network protocol address (IP address) by using a false address or a third­ party address by any other means for the purpose of committing a crime or preventing its discovery.” Many VPNs make it technically difficult, if not impossible, to monitor a user’s traffic and behavior. So how would authorities know if people were using VPNs for criminal purposes? Authorities haven’t spoken to this issue. For now, users have little choice but to wait and see how the law is implemented.

Macedonian activists suspect local authorities used emails in order to impersonate an environmental activism group in an attempt to thwart efforts to stop a government development projects. The Macedonian ruling party VMRO-DPMNE has a history of organizing counter protests and fake accounts in order to discredit activist groups and citizen media.

WhatsApp still in limbo in Brazil

After Facebook failed to comply with a court order requesting the content of WhatsApp messages in a criminal investigation in Brazil, the Federal Public Ministry of the Amazon froze 38 million reais – US $11.7 million – in funds in Facebook’s local bank account, the sum of the daily fines imposed by a judge for not handing over the data. Should the two entities remain at an impasse, the service may once again be blocked in Brazil.