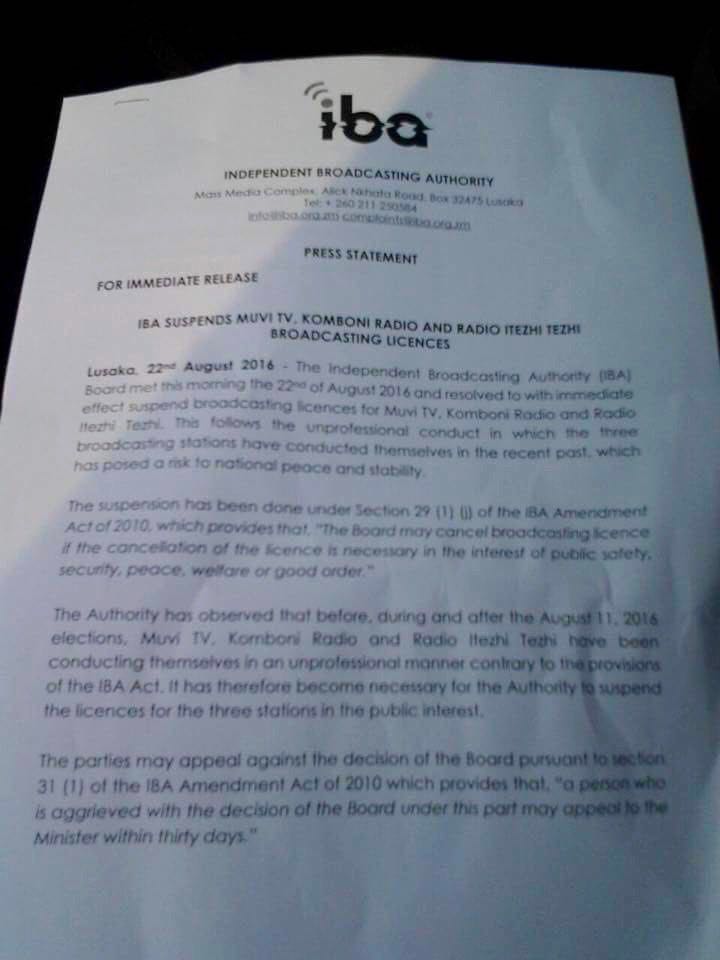 Image of the press release from the Independent Broadcasting Authority announcing the suspension.

Zambia's Independent Broadcasting Authority (IBA) has suspended the broadcasting licences of the country's biggest independent TV station as well as two radio stations for “unprofessional conduct posing a risk to national peace and stability” before, during and after the 2016 elections.

The broadcasting regulator justified its actions against Muvi TV, Komboni Radio and Itezhi Tezhi Radio by pointing to section 29 (1)(j) of the IBA Amendment Act of 2010, which states that “the IBA board may cancel a broadcasting license if the cancellation of the license is necessary in the interest of public safety, security, peace, welfare or good order”.

Immediately after IBA issued a statement about the suspension, reports surfaced that officials from the Zambia Information and Communication Authority accompanied by police officers confiscated an analogue transmitter from Muvi TV.

Zambians voted in the general elections on August 11, 2016. The incumbent, Edgar Lungu, was announced the winner. However, the main opposition candidate, Hakainde Hichilema, has challenged the results in the Constitutional Court.

As election day was approaching, The Post newspaper, Zambia's largest independent daily newspaper, saw their offices locked up and their printing equipment seized by the Zambia Revenue Authority because of outstanding taxes alleged to be at K68 million (US$6.1 million). The move was condemned by media organizations, activists and opposition politicians, who argued that the tax body was used to silence the paper during elections.

‘Close some, scare the rest’

Me thinks media houses have been closed down coz govt does not want the petition independently covered. Close some, scare the rest. #Zambia

#MuviTv What legacy does #ECL and #PF want to leave? Mr president the root you're taking will lead to your distraction

Some on Twitter defended Muvi TV, despite their personal distaste for the station's coverage.

Elias Munshya, a Zambian blogger and lawyer based in Canada, tweeted:

#MuviTV isn't an independent TV spreading unbiased news. It's partisan, biased, divisive. But it has the right to exist in democratic Zambia

He added (GRZ stands for the “government of the Republic of Zambia”):

I desire no help from GRZ about what information I should consume. Liberty entitles me to consume lies from #MuviTV & make up my own mind.

“we have the right to misinformation.” #MuviTV

According to #PF, @MYZNBC is more professional than #MuviTv. Same as saying #Zambia is more of an island than Madagascar.

In an opinion piece on citizen media site Zambian Watchdog, David Kapoma made the case that Zambia “is slowly becoming a court room”:

We all must be careful when we speak out on issues of national interest. Those who transmit our views to the nation and the general public are the target at the moment. […]

We have since entered a different period in Zambia. Here it’s no mercy. You mess up with the authority, you face the consequences.

The controversial Zambian musician Pilato said the following on his Facebook page:

Chinganzule noted that the “crime” Muvi TV committed was to provide a counter-narrative to the ruling's party's election message:

Be honesty and real,what security breech has Muvi TV committed.All they have done is to counter the lope sided reporting of issues which is always inclined in favour of PF led tribalism campaign against [the opposition] UPND by state controlled media houses .People do you think all Zambians are gullible or blind to deduce the real situation here?

‘I thank the law for putting them in their rightful place’

Some Zambians, however, are in support of the IBA's decision.

Mpombo, for example, wanted the IBA to go further than simply suspending the stations:

But the IBA is also abrogating the same clause they’re quoting which says cancel not suspend Let them follow the act expenditiously if these idiots have abrogated it let their licences be cancelled go ahead & do it don’t apply the law half heartedly you may end up commiting a crime yourself the other word for cancel is ban or stop not suspend […].

Tonga said stations causing division in the country should be closed:

AS LONG AS ANY RADIO STATION WANTS TO BRING ANARCHY AND DIVISION IT MUST BE CLOSED BECAUSE ZAMBIANS LOVE PEACE AND UNITY.

And Kazim thanked the IBA for the suspension:

This is a very welcome move by IBA I mean why should a few over zealous and overly ambitious idiots threaten the peace of our nation by airing some biased statements all for the sake of their personal gain.We are tired of this lunacy and I thank the law for putting them in their rightful place.