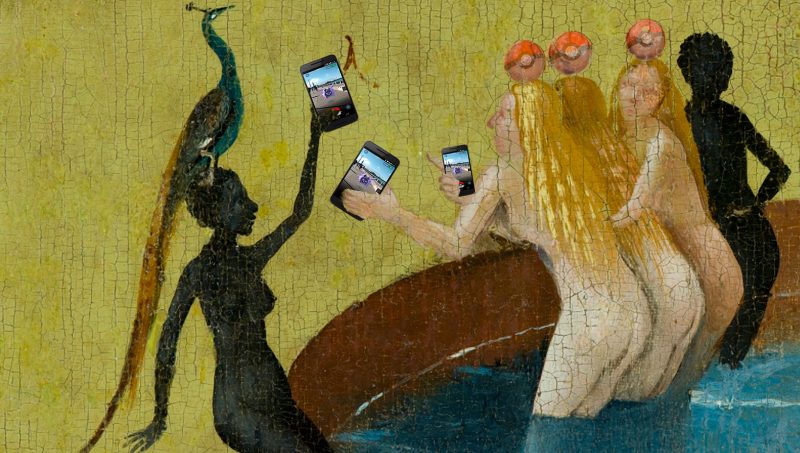 The Pokegarden of Earthly Delights. By Hieronymus Bosch. Edited by Kevin Rothrock.

Russia recently arrested a video blogger for filming himself playing a game inside a cathedral and adding “ironic” and “obscene” narration in post-production. The blogger, a 21-year-old man in Yekaterinburg named Ruslan Sokolovsky, made himself the country's most controversial atheist when he released a video on August 11 showing him flaunting a ban reported in the Russian news against playing Pokemon Go in churches. (At the time of this writing, the video—see below—has nearly 1.2 million views on YouTube, and now boasts English-language subtitles.)

Investigators in Yekaterinburg have been unusually eager to explain their case against Sokolovsky. Earlier this week, days after the blogger was locked up in jail, a spokesperson for the regional investigative committee shared an official press release on Facebook. “This is the biggest press release I've ever seen from this department,” the spokesperson wrote. The statement said Sokolovsky had been denied bail because police discovered illegal drugs at his home, when he was detained, and that he was living in Yekaterinburg without formal registration—a violation of Russia's unforgiving regulations on the freedom of movement.

Curiously, the Investigative Committee's press release corroborated rumors already spreading online, thanks to a network of pro-government bloggers made up of people like Sergei Kolyasnikov, another Yekaterinburg-based blogger, who has viciously attacked Sokolovsky in a series of posts detailing his background and anti-religious activism. On Facebook, Kolyasnikov describes himself as a “political observer” and a publicist. In the blogosphere, he has been uniquely informed about several details of the Sokolovsky investigation, before police ever released the information to the public. Kolyasnikov wrote about Sokolovsky's drug possession before the police revealed the discovery. He also wrote that Ruslan Sokolovsky was born under a different surname—a fact verified by a Dmitry Kalinin, a member of Russia's Social Monitoring Commission. Kalinin says he learned about Sokolovsky's original surname from his court documents and speaking to his mother. It is unclear how Kolyasnikov discovered this information.

The further the situation with Sokolovsky develops (all these leaks from security officials through bloggers and the media: he's a junkie! a child molester! he works for foreign intelligence agencies!), the clearer it becomes that it wasn't some Orthodox figures this guy offended, but certain high-ranking people in uniform. Or, maybe, the men in uniform saw his case as a great chance to punish a dangerous extremist, which is almost as good as neutralizing a terrorist these days. (And therefore a petition from [Metropolitan] Kirill about freeing Sokolovsky, if it comes, will put them in an awkward spot.)

Luckily for Yekaterinburg's men in uniform, the Orthodox Church has backed away from early signals that it might lobby for Sokolovsky's release on bail. After Metropolitan Kirill made sympathetic comments to the media on September 3, the Orthodox Church's Diocesan Council specified that any help is dependent on the blogger admitting his mistake, which Sokolovsky has expressly refused to do. Out of respect for that decision, the church says it won't “force Christian forgiveness” or “Christian love,” explaining that Sokolovsky hasn't asked for the former and rejects the latter.

On September 7, Sokolovsky complained that a prison psychiatrist threatened his life in jail, warning that he could be institutionalized “where they don't let the lawyers in.” Investigators have also revealed that they discovered a camera-pen at his home—technology that is illegal in Russia. The media is describing the device as a “spy pen,” complementing allegations by pro-government bloggers that Sokolovsky's atheist activism online and in the media is part of a larger, coordinated campaign by nefarious forces, designed to weaken Russia's traditional values.

Update: Over the objections of prosecutors and investigators, a judge agreed to release Sokolovsky from jail on Thursday, September 8, placing under house arrest at his attorney's apartment in Yekaterinburg. Sokolovsky is prohibited from using the Internet and telephone for at least the next two months.