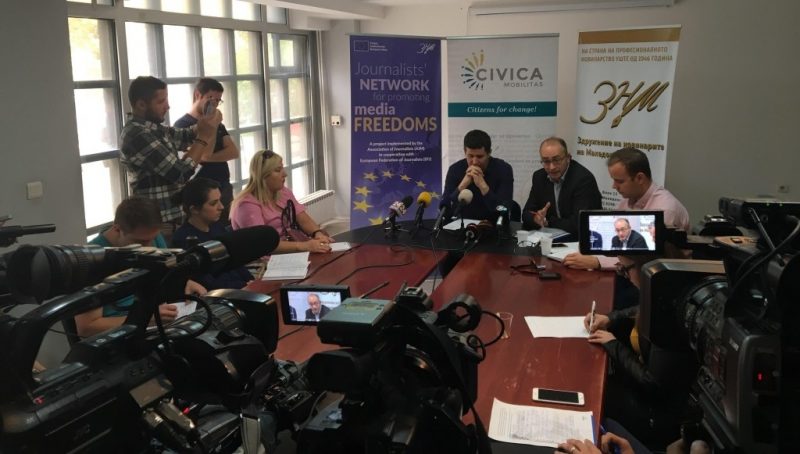 Macedonian journalist Zoran Božinovski [2], who is awaiting trial on espionage charges, has been on hunger strike since September 14. He has been in pre-trial detention for over five months.

Božinovski runs the tabloid-style web portal Burevesnik.org [3], famous for publishing leaked information  [4]that implicated prominent members of the Macedonian political elite in a variety of misdeeds. In 2012 the Macedonian government launched a court case code-named “Spy” (“Шпион” in Macedonian) accusing about 20 people, including Božinovski and other government critics and whistle-blowers, of spying on behalf of EU members Greece and Hungary [5] (Macedonia is a candidate for EU membership).

Most of the suspects in this case had already been found guilty by the Criminal Court and their case is currently expecting a decision from the Court of Appeals. However, as Božinovski lived abroad at the time, a separate trial was set for him within the Criminal Court.

Božinovski was arrested and jailed [4] on an Interpol warrant in 2013 in Serbia, but released after 300 days while Macedonian authorities made a case for his extradition. He was finally extradited [2] to Macedonia in April 2016.

The Association of Journalists of Macedonia (AJM) and the Journalist Trade Union have been organizing protests [6], demanding that Božinovski be immediately released from detention on bail. AJM has expressed alarm at the delay in court proceedings in Božinovski's case. In a recent statement, AJM warned [7] that “the court is violating his right to a fair trial.”

Journalist Bozinovski for two weeks has been on a hunger strike, demanding an end to his detention, and the court today for the second time postponed the trial because of “personal and family circumstances” of Judge Sandra Krstic.

With persistent refusal to release Bozinovski, the court applied double standards. The Court does not impose detention for former government officials suspected of serious crimes, and without due cause has held a journalist in custody for nearly six months. At this point, detention does not serve as means for an uninterrupted process, but rather becomes a punishment.

On September 23, AJM president Naser Selmani revealed [8] that Zoran Božinovski had started a hunger strike on September 14, due to the unjust extension of his pretrial detention and the delaying of his court case. AJM claims [1] that prison authorities and the court did not inform Božinovski's lawyer or the Ombudsman about his hunger strike, “with the apparent intention of hiding this information from the public.”

There are also widespread, credible fears that Božinovski may experience serious mistreatment in prison. Leaked wiretapped conversations published by Macedonia's political opposition in 2015 revealed some top politicians seemingly making threats of torture toward Božinovski. In a conversation between Martin Protuger, the right-hand man of Macedonia's then-Prime Minister Nikola Gruevski, and the then-Minister of Interior Gordana Jankuloska, the two discuss [9] how they plan to torture him once he is in their custody. Protuger requests to pay him a visit “with the CCTV camera turned off in that time.” They also discuss arranging his rape by other inmates as something “that goes without saying.”

On September 22, the European Federation of Journalists (EFJ) also called for the immediate release [10] of the journalist. EFJ General Secretary Ricardo Gutiérrez reported that the court ignored their official request to allow them to visit Božinovski in prison:

This information has not exactly caused a stir among the Macedonian public, where most mainstream media outlets fall under direct control of the ruling parties. Still, some social media users commented on this status quo of institutional uncertainty.

Trial of incarcerated #Macedonia [11]|n journo Z.Bozinovski is set in 3 days.
His lawyer still hasn't received ANY evidence from the court.

Zoran Božinovski is on hunger strike. Can you believe it, the judge asked to be re-аssigned, which had postponed his trial. DID I MENTION THAT HE'S ON HUNGER STRIKE?

The AJM called upon the Court of Appeals in Skopje to immediately submit the decision for the “Spy” case to the Criminal Court, which would enable Božinovski's lawyers to have access to evidence and prepare his defense. Barring this, they argue there will be further delays and the public will continue to believe that the case was “politically rigged.”