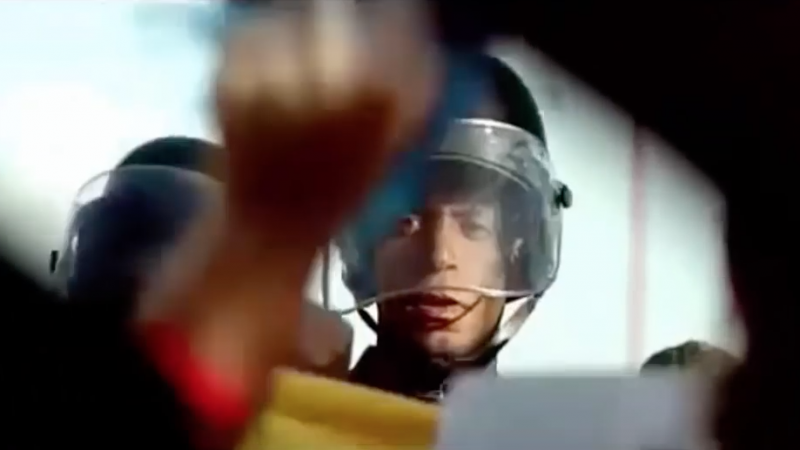 Venezuelan video producers Marco Trejo, César Cuellar and James Mathison were detained by political police on September 20 in connection with their work on a video for the political party Primero Justicia shortly after its release on television and social media.

The video shows a young girl caring for her mother and then searching an empty house for medicine and food. She sends texts messages to a military officer, presumably her father, standing before a legion of protesters. With music swelling, we hear the girl's voice as he reads from his phone. She says:

Dad, mom is still sick and we've run out of medicine.

I will go wait in line because there's no food home.

Remember that the people you're sent to repress are experiencing the same thing as we are.

The video, a bold representation of the current climate for many Venezuelans today, is clearly attributed to Primero Justicia.

Authorities also have an arrest warrant for a fourth producer, Andrés Eloy Moreno Febres-Cordero. All four producers are being charged with offenses under the Military Code of Justice, including offending the Armed Forces and instigating rebellion.

Julio Borges, the National Coordinator of the political party Primero Justicia declared on YouTube that every communication is signed by the party and that the detentions constitute a violation of freedom of speech and that it doesn't constitute incitement to crime in any way. In spite of this, the producers will be tried by a military court, a violation of the principle of natural justice. According to Venezuela's Criminal Justice Code, civilians cannot be tried before a military judge, except in a handful of exceptional specific cases that do not apply to the matter at hand.

Advocacy  7 May 2022
END_OF_DOCUMENT_TOKEN_TO_BE_REPLACED
Cancel this reply