A blackout photo of Nizar Zakka altered by Kevin Rothrock. Image of Zakka speaking at the ‘High Level Policy Statements’ session at the 2015 World Summit on Information Society (WSIS) in Geneva, May 2015 (Image from the ITU Pictures flickr page). He would be arrested a few months later in Iran.

After a year behind bars in Iran, Lebanese citizen Nizar Zakka was sentenced to 10 years in prison and a $4.2 million US dollar fine on 20 September 2016. It is believed that Zakka was originally arrested in Iran due to his “deep ties” to U.S. intelligence and work on “Internet freedom”-related projects.

Iranian officials have not publicly released information regarding his conviction or the charges filed against Zakka. Neither the Lebanese nor the U.S. governments have made any public statement on his behalf.

There have been many other arrests for direct or loose associations through programs connected to European or American organizations. Similar cases include the British-Iranian Nazanin Zaghari-Ratcliffe, of the Thomson Reuters Foundation and Iranian-American Siamak Namazi, who worked to cultivate ties between the U.S. and Iran. The continued incarceration of Arash Zad, an Iranian entrepreneur who was active and present in start-up conferences and networks in Turkey and Europe, however is the best example of how precarious the situation can be. As far as it can be known, Zad is a non-political technologist now caught in this narrative of paranoia around “western-intrusion”.

These cases should come as no surprise to people working in this field. But they should generate more awareness about the risks incurred by those traveling and intending to work in Iran, particularly in the new environment of post-nuclear deal paranoia. As the country draws closer to presidential elections in May 2017, the push and pull between moderate, reformist and hardline elements are likely to increase these politicized arrests.

A Lebanese citizen with permanent residency in the U.S., Zakka was active among organizations working on Internet governance issues in the Middle East. He led the Arab ICT Organization IJMA3.org, a Beirut-based industry consortium and promoter of ICT for development in the region that was launched as part of a USAID initiative known as the IT Mentor Alliance. The AP reported that since 2009, Zakka has received at least USD $730,000 in funding from the U.S. State Department and the U.S. Agency for International Development to run various programs for IJMA3. 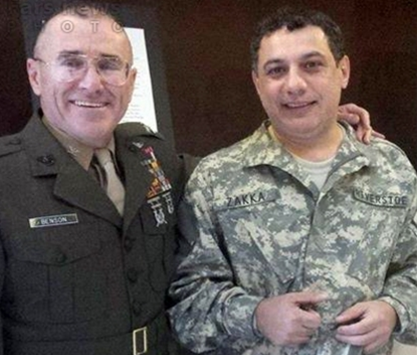 Prior to his arrest, Zakka's work had garnered him a negative reputation among Lebanese activists. In one blog post someone mocked Zakka for his NGO profit-making, which reportedly allowed him to purchase a $3 million house in Washington D.C. A source that wished to remain anonymous documented Zakka's involvement in the bribery and funding of the corrupt Nicolas Fattouch coalition during the 2009 Lebanese election.

In September of 2015, while visiting Iran for a state-sponsored conference for which he received an official invitation, Zakka went missing. Two months later, Iranian state television announced that the Lebanese citizen was in police custody for his “deep ties to the U.S. intelligence and military establishment.”

Photos of Zakka in a military-style uniform were then widely circulated within Iranian media, helping to paint a narrative of Zakka as a U.S. spy.  Zakka's American prep school, Riverside military academy, later stated those photos were taken of him during the school's homecoming event. The name “Riverside” is visible on the left breast pocket of the uniform.

Before the television broadcasts however, Kayhan newspaper, Iran's foremost hardline-conservative newspaper that is closely affiliated with the office of the Supreme Leader, published a would-be exposé entitled “Cyber Management Project Has a Footprint of Intrusion.” The article, published without attribution, asserted that Zakka's ties with U.S. government agencies were part of a foreign conspiracy for the Western domination of Iran.

The following excerpts from Kayhan celebrate Zakka's arrest as a victory against Western intrusion:

Foreign media made a variety of accusations in an effort to lobby against the recent arrest made by our security institutions in order to fight the American influence on social and economic structures of [our] system. The truth is that the aforementioned arrests, for various reasons, guaranteed the future rule of the Islamic Republic of Iran…

While Iranian officials have not released any documentation proving Zakka's criminality, it is clear that they took issue with his involvement in Iranian ICT and Internet governance projects, supported by grants from U.S. government agencies.

Along with other hardline media, they focused on his work that fell under the mantle of “Internet freedom”, the term coined by Hillary Clinton when she served as U.S. Secretary of State.

Zakka was tried before Judge Abolghassem Salavati, who is known for his tough sentences in politically-charged cases. Zakka's wife says she has yet to hear from Iranian authorities what the exact crime her husband has been accused of.

Just spoke to wife of Nizar Zakka, Lebanese US resident sentenced to 10 years jail in #Iran. She still hasn't been told what his ‘crime’ was

Iranian media have thus far remained silent on Zakka's 10-year sentence. At present, the narrative blend of facts and conspiracy theories published by Kayhan is the most comprehensive piece of public reporting on Zakka's case.

Kayhan: ‘Who is Nizar Zakka?’

Zakka is the regional manager of “Transnational Development Agency Of United States” in Western Asia and North Africa. His cooperation with the U.S. State Department officially began in 2005, exactly when USAID decided to use economic and social networks as the key to political change in the Middle East…

In the agency documents they called this project “the influence organization” and emphasized the cooperation between non-governmental and social structures with state administrators as part of an effort to control and maintain the balance within the government.

Kayhan represents Zakka's work as part of a conspiracy by Iran's enemies — namely the United States and Saudi Arabia — to culturally and economically dominate Iran and create a rift between the Iranian regime and its people. While it is clear that Zakka was working on behalf of USAID, the meaning of this work — and the question of whether or not it was intended to realize “cultural and economic domination” — is in the eye of the beholder. 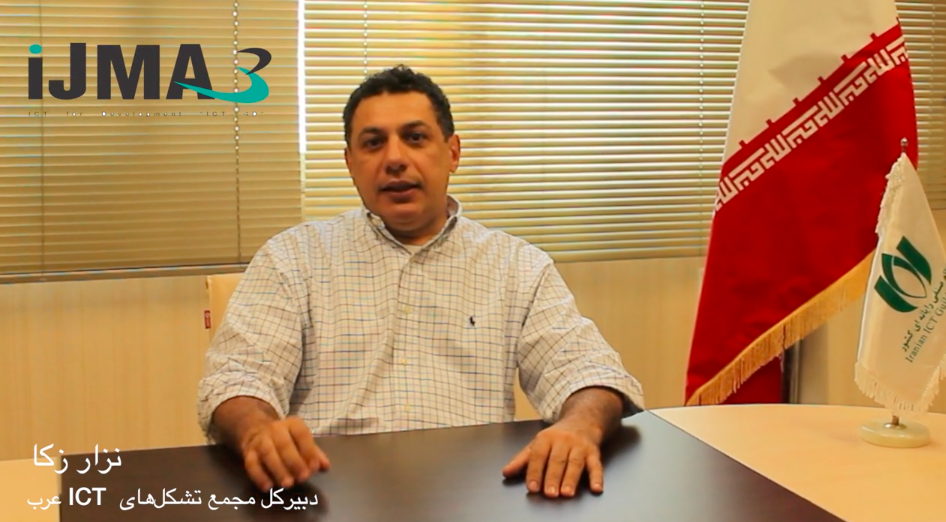 Nizar Zakka, recently sentenced to 10 years in prison in Iran spoke during Persian ICT Week in 2014 as he partnered on ICT for development projects with his organization IJMA3 with Iranian private and governmental groups. Image from Persian ICT Week Official Video.

The articles goes on to describe how Zakka's organization worked alongside UN agencies and the Iranian ICT Ministry to plan the Persian Internet Governance Forum. Yet Kayhan presents this information without mentioning that the Persian IGF never came to fruition.

Internal conflicts apparently prevented IJMA3 from holding the first Persian IGF session, although preparatory meetings did generate some government involvement in the multi-stakeholder process, according to a report by Small Media. 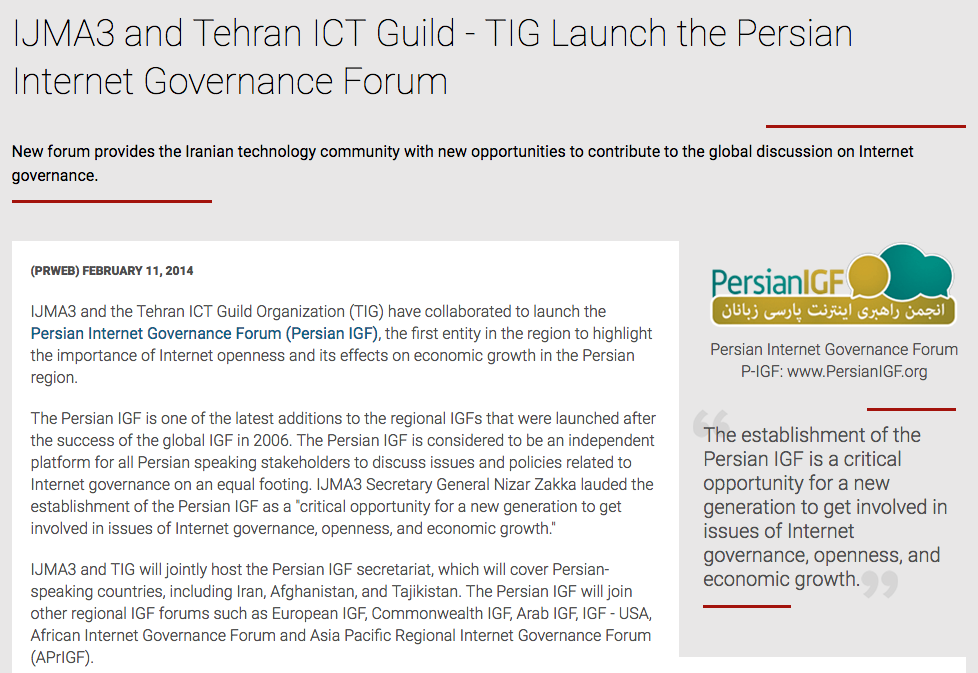 An announcement of the joint venture between IJMA3 and the Tehran ICT Guild to host the first Persian IGF. Screenshot from prweb.com.

It appears that Kayhan is primarily concerned with how Zakka and his organization were able to achieve close proximity to individuals within the Iranian government while still maintaining ties to the U.S. government. Kayhan charges that Zakka worked with an official known as N.J., who at one time served as Senior Manager of Information and Technology Organization in the Ministry of Communication in Tehran. (Note: It is a common practice in Iranian hardline media to identify perpetrators or those arrested under charges of national security with only their initials.)

The article links efforts by N.J. to promote Iran's attendance within the international ICT sphere to Zakka, portraying them as forms of sabotage for national Internet projects and efforts.

[He launched] the Lebanese “Internet freedom” program under the structure of Persian IGF (Internet Governance Forum) with the help of “N.J.” [initials of an unnamed official] the Senior Manager of Information and Technology Organization in the Ministry of Communication in Tehran…

IGF is the registered executor of world politics within the World Summit on the Information Society (WSIS). Within this summit which is famous for being “the losers club of Internet management,” these countries — that are satellites of American thought on cyberspace — bind and present themselves as participants in the American dream of “Internet freedom.”

Kayhan goes on to paint the United Nations forums and agencies involved with telecommunications and Internet governance as pawns of the US “Internet freedom” agenda. The story implicates various organizations doing Iran-focused digital rights work with support from U.S. and European government funding bodies.

While the article is rife with conspiracy theory formulations, there are many cases where the above mentioned governments worked alongside Hivos, Internews, IREX, and Freedom House among other organisations on Iran-related projects through regional grant mechanisms. This work actually preceded the “Internet Freedom” agenda born under Hilary Clinton, dating back as far as 2006.

The tone of the article exudes a deep resentment for elements within the present government that are nurturing relationships and work with the broader international community. While the descriptions of the Iranian government's participation at well-known global forums such as the World Summit on Information Society (WSIS) read as juvenile (they describe WSIS as a “loser cyber club”), it nevertheless reflects a serious phenomenon in Iran.

There is a known push and pull between the reformist and moderates against hardline elements of the Iranian government. On one side, there are those associated with President Hassan Rouhani's administration and efforts to bring about the nuclear deal. On the other side are the more hardline and conservative elements, especially those allied with the office of the Supreme Leader, and the conservative and powerful bodies such as the Revolutionary Guards and the Judiciary. These elements are involved in maintaining Iran's financial institutions, but also sit at the forefront of arrests and persecutions of individuals for bringing “foreign meddling” to Iran.

This case — and the Kayhan article itself — can be seen as a cautionary tale for Iranians or foreigners involved in technology-related work in Iran that receives funding from Western governments.