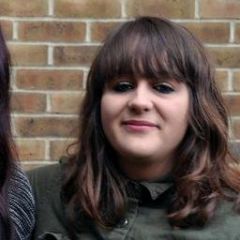 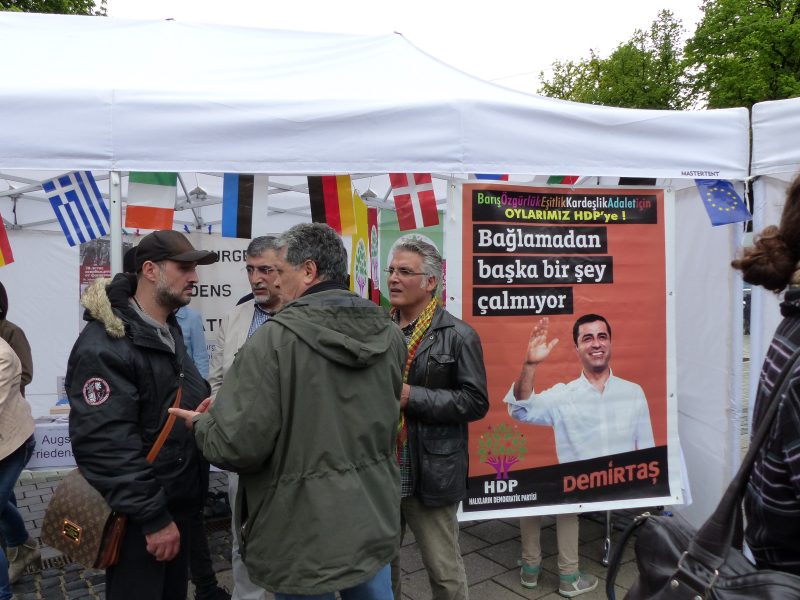 Selahattin Dermitas shown on a poster at a pro-HDP gathering in Germany. The text of the poster reads, ‘he doesn't play anything except for the baglama!’ Dermitas has asked his lawyer to bring the Turkish stringed instrument for him to compose songs in solitary confinement. Creative commons.

Turkey's post-coup crackdown continues to make international headlines in its fourth month, with November bringing an attack on independent media outlets and the arrests of multiple politicians from the pro-Kurdish opposition People's Democatic Party (HDP), including the party's co-leaders Selahattin Demirtas and Figen Yuksekdag.

The party, which also advocates for women's and LGBTQ+ rights alongside those of other minority groups as well as the Kurds, first entered parliament last year. There are a total of 59 HDP parliamentarians.

On November 4, Demirtas and Yuksekdag were arrested alongside eight other HDP parliamentarians in connection with an anti-terror investigation. Reports initially claimed arrest warrants had been issued for all 59 HDP MPs, though this has since been proven false. A total of 14 arrests warrants have been issued.

Tonight 5,148,085 people's votes have been placed under arrest

The HDP members were arrested for refusing to answer prosecutors’ questions in a counter-terrorism probe targeting the militant Kurdistan Workers Party (PKK).

Members of HDP also stand accused of supporting and even acting as a political proxy for the PKK, with whom the Justice and Development Party (AKP) government in Ankara recommenced hostilities last year after a devastating bombing in the eastern city of Suruc.

The HDP co-Mayors of Diyarbakir, a major Kurdish majority city in the country's south-east, were also detained on October 25 under the anti-terrorism investigation.

The measures leave many citizens disenfranchised. Notably, all three MPs belonging to Diyarbakir's Hakkari district, which voted 83.7% for the HDP, have been detained.

For years they transferred the money we sent for the municipalities to terror. Whoever harms this nation will pay for it, there is no other way. Not only those bombing and burning, but also those supporting terror.

It's not that it doesn't come to mind; having completely lost public political support, in looking for a way out, the HDP could get themselves thrown inside [prison]?

While HDP has strong support among some Turks on the left of the political spectrum, others tend to agree with the government view that HDP is supportive of terrorism.

AKP – FETO [Fethullah Gulen Terrorist Organisation] – HDP – PKK You have your fingers in every evil. If it weren't for you, Turkey would be heaven. #HDPandPKKarePawnsoftheEnglish

Almost immediately after the arrests, Diyarbakir was the site of a bomb attack which killed 11 and injured over 100 people. Turkish government officials and media assigned blame to the PKK. The Diyarbakir head of the DBP (Democratic Regions Party), a Kurdish party affiliated with the HDP, Cungus Recai Altay, lost his life in the attack.

After a few hours, responsibility for the blast was claimed by the Islamic State. This is a first for the group, which has never before claimed responsibility for any of its attacks on Turkish soil (including the 10 October 2015 Ankara attack, the deadliest in Turkey's history, which killed 103).

A coalition of the ruling AKP and other opposition parties CHP and MHP voted in May to strip 138 MPs facing criminal investigations of their immunity including 50 from HDP. The arrests are also partially validated by Turkey's current state of emergency law. HDP has announced a parliamentary boycott in protest of the arrests.

Protests against the arrests have occurred not only throughout Turkey but also in major European cities. Some 3,000 are estimated to have protested in the London district of Haringey and demonstrations spread as far afield as Tokyo. The son of an HDP MP was beaten heavily by police and hospitalised during a protest in Istanbul. Below is footage from a pro-HDP rally in Kurdish-populated Amude, Syria.

In the aftermath of the arrests, the Turkish government enacted perhaps its most far-reaching ever restrictions on internet use.

Turkish internet users are by now well adapted to the use of VPN and proxy services to bypass bans. TunnelBear offered on November 4 free and unlimited VPN access to users in Turkey. However, the government responded by banning the VPN provider and several others. TorProject turned to Twitter on the same day to offer help bypassing Tor bans in Turkey.

Prime Minister Yildirim stated that the restrictions were a “security measure”.

Leader of the opposition CHP (Republican People's Party) Kemal Kilicdaroglu spoke out against the arrests, as did other members of the CHP:

What was done tonight is not only a coup but also an operation to separate the country! TBMM [Grand National Assembly of Turkey] is now bombed once more!

Others also criticised the CHP's show of solidarity:

#CHPIsAtaturksParty Is there anyone who believes this? CHP is a terrorist organisation's lawyer, it became the backyard of the HDP. If Ataturk [founder of Turkey and the CHP] was alive, he would be the first to close the CHP.

HDP's co-leaders Demirtas and Yuksekdag are being kept in F-Type high security prisons in Edirne and Kocaeli respectively. F-Type prisons are designed for members of armed organisations, those convicted of organised crime and prisoners serving aggravated life sentences. The facilities have been strongly criticised by Human Rights Watch.

Demirtas’ lawyer stated that his books and clothes were seized upon arrival at the prison and that he is being kept in an isolated cell. The politician requested that his lawyer bring him a baglama, a Turkish string instrument, so that he can write and sing songs while in prison.

The stripping away of independent media and the cranking up of state propaganda over the last two years or so is beginning to bear fruit for the ruling party.

The latest A&G poll estimates that if a general election were to happen in Turkey now, the AKP would gain the super majority and the HDP would fail to pass the country's 10% electoral threshold.