Zone9 members rejoice at the release of Befeqadu Hailu (second from left, in scarf) in October 2015. Photo shared on Twitter by Zelalem Kibret.

Befeqadu Hailu, one of the best-known voices in Ethiopia’s stifled media environment, was arrested on November 10, 2016. In the morning hours, authorities took Befeqadu from his home to a jail cell in a nearby police station. He spent the day in there and was then transferred to a police station located in a neighborhood called Kotebe.

A member of the high-profile Zone9 blogger collective and a Global Voices contributor, Befeqadu is an active voice in the blogosphere and on Twitter. When the Ethiopian government declared a state of emergency, he wrote:

Now, the government in Ethiopia has declared a ‘state of emergency’ that lasts in six months. As ‘the usual suspects’ because of our dissents [sic], my friends and I are scared more than before. It has always been a risky thing to criticize the government here. Furthermore, this declaration has given the government the right to arrest us even without an excuse. I’m publishing this personal note as a blog because I am afraid I may be arrested sometime soon. If so I want people read me and understand me. I want people to also understand my likes to understand the desperate protests in Ethiopia. It’s an attempt to survive as human with dignity.

Authorities did not officially disclose the reason for Befeqadu's arrest, but they told him that he was wanted by the highest-ranking military officer (also known as command post) that is instituted by the state of emergency. Later he was told that the interview he gave for Voice of America's Amharic Service about Ethiopia's state of emergency was the reason for his arrest, and that he either will be charged or given “educational” training.

His friend and co-author Zelalem Kibret shared on Twitter the five-minute sound bite from Voice of America that supposedly justified Befeqadu's arrest. The clip is in Amharic.

Demonstrations have taken place in Ethiopia's Oromia region since November 2015 and spread across the country in recent months, with protesters demanding greater self-rule, freedom and respect for the ethnic identity of the Oromo people, who have experienced systematic marginalization and persecution over the last quarter century. Authorities have used deadly force against protesters. In October, the Oromo Federalist Congress (OFC), an opposition party, reported a death toll of nearly 600 people.

Since the government declared an official “state of emergency” last month, social media and mobile Internet connections have been periodically blocked, a nationwide curfew has been instituted, and any form of speech or gesture indicating opposition to the government can merit punishment. 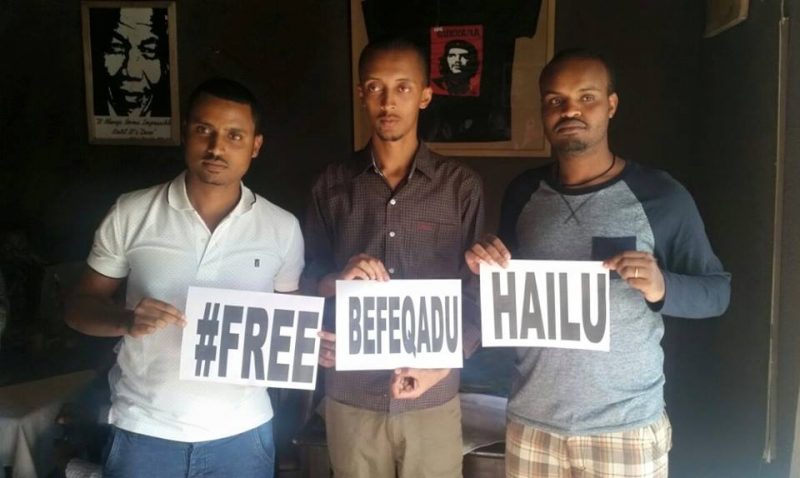 Due to his steadfast online advocacy for human rights and rule of law in Ethiopia, Befeqadu has spent much of the last three years behind bars. Along with his Zone9 blogging collective colleagues, the 35-year-old has been arrested and stood trial several times. From April 2014 until October 2015, they were jailed and then charged under Ethiopia's Anti-Terrorism Act.

In April of 2016, the prosecution appealed the decision against five of the Zone9 bloggers, including Befeqadu. The Supreme Court is scheduled to issue a verdict in the case on November 15, but this has been postponed on several occasions.

Befeqadu unfortunately is in good company as a writer under fire in Ethiopia. Natnael Feleke, also a member of the collective, spent three days in October in a local police station after he was arrested for conversing loudly with his colleagues in a hotel about the causes of stampede that resulted in deaths of hundreds of people in late September.

Seyoum Teshome, a prominent blogger who was arrested last September is not yet known. Almost two months after his arrest, authorities have not disclosed the causes of his arrest or any charges against him.

The Global Voices community stands in solidarity with Befeqadu. We urge his immediate release by Ethiopian authorities. Learn more about Befeqadu and the Zone9 bloggers.