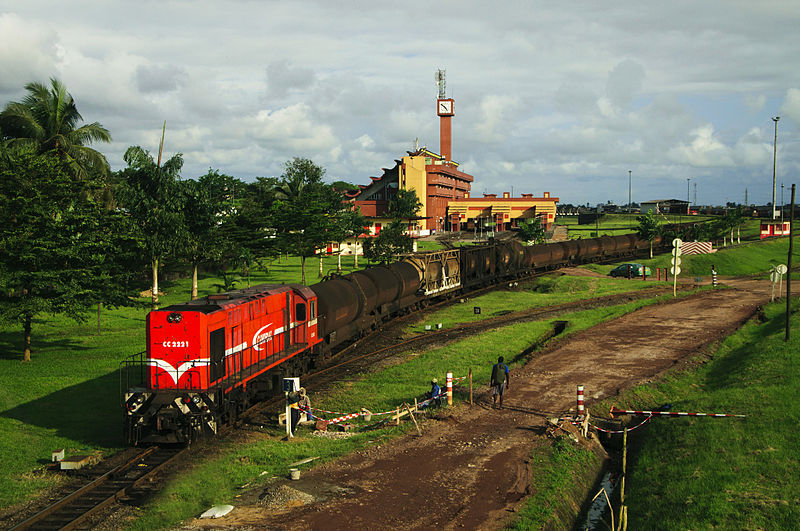 A train station in Douala Cameroon. Social media played a vital role in providing an alternative narrative to official accounts about the train accident in the town of Eseka, some 75 miles from the capital Yaounde. Creative Commons photo by Z. NGNOGUE.

The government of Cameroon has launched a campaign against social media, which according to the government-controlled daily, Cameroon Tribune, is “fast becoming a threat to peace and a secret instrument of manipulation” promoting “character destruction, destabilisation of public opinion and deformation of facts among others.”

A careful analysis of the situation tells of a phenomenon that is proving to be dangerous for society if no measures are taken to scale it down. This is important especially as elections are approaching. People with political ambitions may dive into it and use it to fight their opponents.

Other government media outlets, particularly the state-controlled Cameroon Radio Television (CRTV), have also joined the campaign to highlight the alleged ills of social media and the need for social media regulation in Cameroon. This was the case, for example, of the French (audio) and English (audio) language radio newscasts of November 1.

The immediate cause of the government’s outrage was the deadly train derailment in Eseka, some 74 miles west of Cameroon’s capital, Yaounde, which resulted in the death of at least 80 people and injured over 600 on October 21, 2016. While social media users were nimble in sharing information about the disaster in real time, government officials and government-owned traditional media were slow to respond to, and inform the public about, the accident. In fact, pictures and videos of the tragedy were already being posted on Facebook, Twitter and other social media platforms when the government and Camrail (a subsidiary of the French conglomerate Bolloré that manages the railway system in Cameroon) were still denying that an accident occurred.

Once government officials finally conceded that there had been a train accident, social media played a vital role in providing an alternative narrative to official accounts about the derailment, for example, making the case that overcrowding and defective Chinese-made carriages were likely contributing factors, not just speed as Bolloré officials claimed.

For example, in an ironic tweet, user @pahedipoula posted a picture of one of the overcrowded carriages of the ill-fated train:

#Cameroon #Eseka. “Everyone was seated in the train” according to Camrail. I love the humor of the folks at #Bolloré”.

It was also on social media that questions were primarily raised about the official death toll as individuals on the ground talked to friends, relatives, and the local and foreign media. For example, Radio France International’s interactive program, Appels Actualité, tweeted the statement of an eyewitness who put the death toll at more than three times the official figures: “From what I could see first-hand, there were not just 79 corpses, there were at least 200, 250!”

Most significantly, many Cameroonians criticized President Paul Biya on social media for what they perceived as his lukewarm attitude towards the tragedy – not only did the president send a message of condolence to the victims from Switzerland (incidentally via social media), he did not return home immediately after the accident. [For a detailed analysis of the role of social media in bringing attention to the accident, watch this French language report by VoxAfrica TV.]

Twitter user @237pleure lamented: “Tragedy in Cameroon. Where is Paul Biya? No doubt in a luxury hotel in Geneva making fun of Cameroonians.”

After President Biya declared a national day of mourning from Switzerland, Twitter user Yannick T lashed out: “What else do you know how to do aside from this? You have become the President of the Intercontinental Hotel in Geneva. What a fiasco.”

Stung by the accusations of negligence, incompetence and presidential indifference, the government played the victim:

Some individuals quickly transformed the Eseka disaster into a convenient alibi, an ideal outlet to strike, to deal the death blow and satisfy their despicable political appetites… [Their] statements obviously had a single objective: overwhelm and embarrass the President of the Republic to the maximum, and benefit from the political fallout.

During a press conference days after the accident, the Minister of Communication and Government Spokesperson, Issa Tchiroma, responded:

Internet users are constantly angry… it is their character… we are not bothered by social media. In any case, it is a space that we have to logically occupy.

A “new form of terrorism”

The anti-social media campaign was taken a notch higher on November 10 when, in a speech to parliament, the Speaker of the National Assembly, Cavaye Djibril, complained about “the social malaise” caused by the “insidious effects of the social media” in Cameroon, which he described as “a new form of terrorism”:

Social media… is now being used for misinformation, and even intoxication and manipulation of consciences thereby instilling fear in the general public. In fact, it has become as dangerous as a missile… In a nutshell, social media has become a real social pandemic in Cameroon… I urge the appropriate authorities to see the pressing need to track down and neutralize the culprits of cybercrimes… we should know that there is a limit to freedom, for freedom without limit stifles freedom.

The speaker’s statement seemed to confirm persistent claims that the government is drafting a social media bill to stifle speech on social media.

A tradition of hostility and suspicion towards social media

The recent attacks on the Internet in general, and social media in particular, are not new. The government of Cameroon has had a longstanding policy of entrenched hostility towards cyberspace.

In 2014, the Director General of National Agency for Information and Communication Technologies, ANTIC, revealed that the agency constantly monitors social media to detect illicit content that may potentially threaten the national security and image of Cameroon.

President Biya himself joined the bandwagon in 2015 when he warned against online manipulation during his annual Youth Day speech: “Do not be misled notably by birds of ill omen, dreamers and enthusiasts of virtual calls for destabilization through the social media. These irresponsible prophets are desperately seeking to manipulate you.”

The President ordered his cabinet ministers to implement a more proactive social media communication strategy earlier this year. This came after the Monique Koumateke scandal in March 2016, in which social media users expressed outrage over the death of a pregnant woman who was denied access to a local hospital due to her inability to pay for care. According to a report by the Paris-based weekly, Jeune Afrique, only six ministers in the Biya cabinet had personal Facebook pages as of April 2016, and only two of them also had Twitter handles. The president’s order has so far had limited impact as government officials are constantly reacting to, rather than shaping, online events and conversations.

Although Cameroon does laws that address social media, a 2010 law relating to cybersecurity and cybercriminality contains two key sections that sanction online activity.

(1) Whoever uses electronic communication or an information system to act in contempt of race or religion shall be punished with imprisonment for from 02 (two) years to 05 (five) years or a fine of from 2 000 000 (two million) to 5 000 000 (five million) CFA francs or both of such fine and imprisonment.

(2) The penalties provided for in Subsection 1 above shall be doubled where the offence is committed with the aim of stirring up hatred and contempt between citizens.

(2) The penalties provided for in Subsection 1 above shall be doubled where the offence is committed with the aim of disturbing public peace.

Internet and social media usage on the rise

According to Internet World Stats (IWS), a website that tracks regional and global Internet usage, there were about 4.3 million Internet users in Cameroon as of June 2016, with an Internet penetration rate of 17.7% (up from 6.4% in 2013).

According to a recent survey by Mediametrie, a French audience measurement company, Facebook is the most popular social media platform in the country (IWS puts the number of Facebook users at 2,100,000) followed by Google+, Instagram, Twitter and LinkedIn. The survey reveals that 73.3% of individuals between the ages of 15 and 24 have social media accounts.

Social media is increasingly becoming a rallying point for those who want a change at the helm of the state. No surprise, therefore, that the Biya regime views social medial as a subversive space that must not be left unchecked

The State of Cameroon is resolutely committed to the fight against social media so as to preserve the image of the country.

It appears that for the Biya regime, social media users must either be co-opted or coerced into submission if they wish to continue expressing themselves online.

Advocacy  18 May 2020
END_OF_DOCUMENT_TOKEN_TO_BE_REPLACED
Cancel this reply