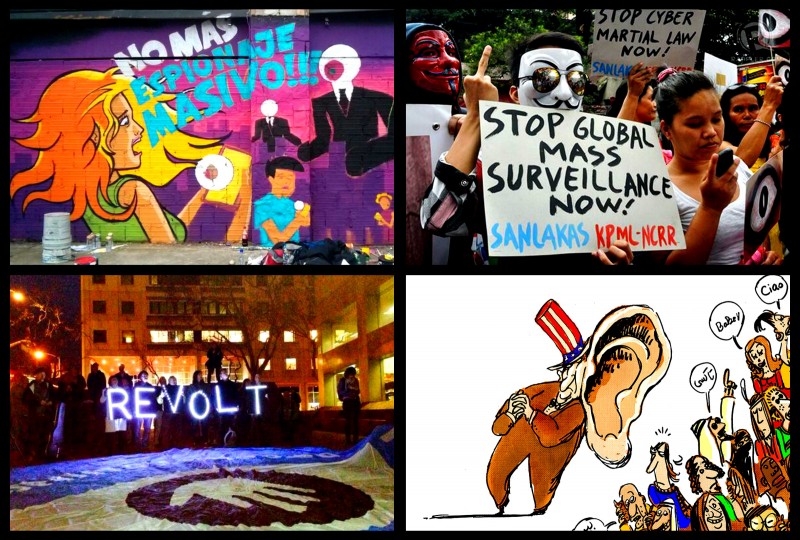 Images from February 2014 anti-surveillance demonstrations, from top left: a mural by War Design art collective in Bogota, Colombia; a public protest in Manila, Philippines (photo by ; a public rally in San Francisco, US (photo by Ellery Biddle); an anti-surveillance cartoon by Egyptian cartoonist Doaa Eladl.

In the week since real estate and reality TV mogul Donald Trump won the US presidential election, reports of harassment and hate speech online and off have spiked in the United States.

Alongside many one-off incidents of identity-based harassment online, one case has stood out as a upsetting example of how networked technologies can be used to target specific groups. Dozens of African-American students at the University of Pennsylvania discovered on November 12 that a former classmate had used their Facebook profile information to build a list on the platform GroupMe, where instigators used racial epithets, called students “dumb slaves”, and promoted an event called “The Daily Lynching,” a reference to the post-Civil War phenomenon of mob killings of people of African descent.

Journalists and activists reporting hate crimes online are also routinely experiencing second-wave harassment, simply for speaking out about these acts of violence. According to research from the Southern Poverty Law Center, immigrants and people of color have been the most common targets of reported incidents. New York Daily News journalist Shaun King, who has been independently collecting reports in coordination with civic groups, estimated that 70% of those targeted are women.

It hasn’t helped that platforms like Facebook and Twitter are unable to respond to the volume of hateful and inciting speech on their platforms with strong and consistent policy enforcement, despite the fact that they forbid hate speech and incitement to violence. As Think Progress’s Lauren Williams points out, “Online harassment, whether it’s sexist, racist, anti-Semitic— is likely to stay unless tech companies decide untrammeled free speech no longer outweighs consumers’ desire to have abuse-free platforms.”

Will the US really institute a ‘Muslim registry’?

While these acts can’t be explicitly blamed on the President Elect, it is easy to see how supporters of a candidate who ran on a rhetoric of prejudice towards women, people of color, Muslims and Latinos, and proposed to create a registry of Muslims in the US, would act on the sentiments behind these ideas.

And what of the promised registry? Kansas Secretary of State and Trump advisor Kris Kobach says Trump’s transition team is discussing a “Muslim registration” system through which Muslims would carry a unique form of ID that denoted their religion. In a November interview with Reuters, Kobach said the team had also discussed reinstating the National Security Entry-Exit Registration System, a program developed under the administration of George W. Bush, in which male immigrants and visitors from select countries in the Middle East, North Africa and South Asia were required to undergo fingerprinting, interrogation and be photographed, and to maintain regular communication with immigration officials regarding their whereabouts.

The program was discontinued under the Obama administration after multiple organizations including the Council on American-Islamic Relations filed a civil suit arguing that the program violated constitutional rights to privacy. CAIR and the American Civil Liberties Union have vowed to take the government back to court if the registry comes to fruition.

Befeqadu Hailu, a member of the Zone9 collective, a Global Voices author and one of the best-known voices in Ethiopia’s stifled media environment, was arrested on November 10, 2016. Authorities told him that an interview he gave on Voice of America about Ethiopia's state of emergency was the reason for his arrest. Since the government declared an official “state of emergency” last month, social media and mobile Internet connections have been periodically blocked and any form of speech or gesture indicating opposition to the government can merit punishment.

A few days prior to Befeqadu’s arrest, Global Voices contributors and contact in Ethiopia reported that the international citizen media website was no longer accessible in the country. Technical tests conducted by Global Voices’ partners have since confirmed their findings.

Saudi authorities arrested women’s rights activist Mariam al-Oteebi on November 1, following a complaint submitted by her father for “parental disobedience”. Al-Oteebi has been very active in the online campaign #IamMyOwnGuardian, launched by women’s rights activists in Saudi Arabia to call for an end to the male guardianship system. Under the system, women must have the consent of a “male guardian”, usually a father, husband, brother or even a son, to travel, get married, and work. According to Saudi activists, al-Oteebi has previously been harassed by her brother, over her Twitter profile photo, which displays her passport and national ID card.

The trial of Colombian biologist Diego Gomez, who is facing charges for sharing an academic paper online for which he did not have copyright, has been postponed yet again. The case against Gomez, which has been in progress for three years is likely to set an important precedent in Colombia for the right to access knowledge online.

According to estimates by the Bahraini rights advocacy group, Bahrain Watch, Internet disruptions in the protest-village of Duraz, have cost residents at least 265,000 USD since 20 June 2016. A previous investigation published by the same group revealed that ISPs were imposing “an internet curfew” in Duraz, a hotbed of anti-regime protests, by deliberately shutting off internet service from 7:00 pm to 1:00 am on a daily basis by disabling cell towers and dropping about 90% of packets on fixed-line connections.

Turkey expanded the network throttling campaign it began in Kurdistan in late October by blocking circumvention tools including Tor, Hotspot Shield, Tunnel Bear and Psiphon. Though Turkey has instituted Internet blockages before, Turkish netizens say the current blocks are unusually expansive. The disruptions have been linked to the arrests of Kurdish party leaders.

The UK parliament passed the long-debated Investigatory Powers Act on November 16, codifying practices of requiring telecommunications companies to store and provide the government with access to a wide range of user data, and to break encryption at the government’s behest.

Ecuador’s national assembly is debating a draft law addressing privacy and data protection. The draft law aims to protect the privacy of personal data that can be found in databases, electronic archives and other physical and digital platforms. It also extends specific protections for data pertaining to public servants. This element of law has raised concern among academic and civil society groups.

In Oman, the online independent newspaper Albalad which was launched in 2012 and covered a range of topics in the sultanate including politics, economy and culture, put an end to its operations on November 3. In a farewell post, the newspaper mentioned pressures it had faced in the past but did not specify a reason behind this decision. Albalad’s closure coincides with a broader crackdown on press freedom in Oman. Last August, the government closed the daily newspaper Alzamn and suspended its website over a report on government interference with the judiciary.