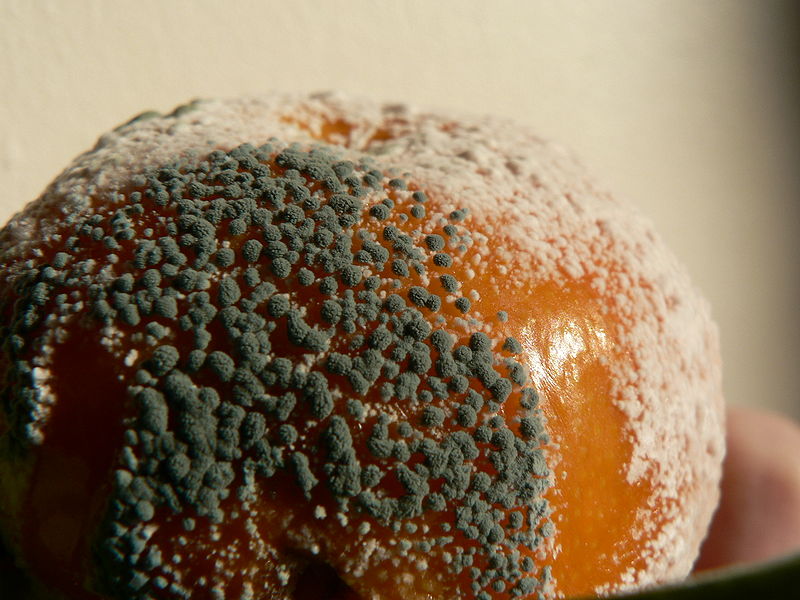 Online complaints about food quality are a persistent fear for restauranteurs and food companies, who often depend on positive reviews to keep their businesses afloat.

But in a recent case in China, it is the complainer — not the restauranteur — who is suffering for his negative comments about the food at his university cafeteria.

Mainland Chinese blogger Wang Zhian has documented an online incident of an university student being harassed by a school restaurant owner, school and education authorities and public security police for complaining about food quality on Weibo.

The student, whose Weibo screen name is @“highest authority Si Sailou” (@最高权力西塞罗), was accused of spreading rumors about moldy buns at the university restaurant. He was forced to make a public apology. He has now deleted the apology and all his Weibo posts, presumably due to a flood of harassing comments from other netizens.

When he raised the issue with the restaurant owner, he was told that the black spots on buns were caused by fermentation of a brand of yeast called “Angel yeast”.  Later, an expert on the issue stepped in and clarified that the black spots were not caused by yeast fermentation. But the clarification has not brought justice to Si. He is still missing in the online world.

Here is the timeline documented by Wang. All the quotes were retrieved from screen captures of Si's Weibo account:

10:26 AM University student @highestauthority Si Sailou from Lanzhou Finance university published a post on his Weibo with a photo showing buns with black spots on them. The post read:

@Lanzhou Finance University There are several incidents that students have been cheated by the ethnic restaurant’s molded Muslim buns and soya bean food products. Many alumni complained that the Muslim restaurants sold expired food. When they found out that the food was rotten and demanded exchange, the food they got in exchange was the same. Is that because the country’s food security law cannot rule over the Muslim food? Please @Gansu Food and Medicine Quality Monitor […] send someone to deal with the matter according to law and respond to the students.

He got the photo from his fellow student via QQ, a very popular mobile social media app, and many echoed that they had similar experience. A few had diarrhea after eating at the restaurant. He confirmed these allegations with others and decided to write the post.

Soon after the post was published, he received a private message via Weibo from the restaurant asking him to go there by 1pm, or they would report to the police. Si ignored the message and updated his friends about the complaint development on a chat group. 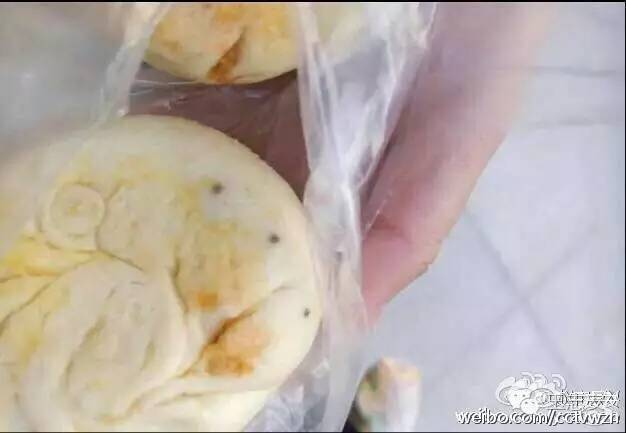 A student complained about the black spots on buns online and harassed by police, school and restaurant owner. Image from Weibo.

3:00 PM The police station called Si, warned him that if his post had been shared more than 500 times, he would be in trouble. The police wanted to talk to him and urged him to settle the matter with the restaurant owner.

The Rumor Law was passed in 2013 and it criminalized unverified information which has been viewed 5000 times and retweeted 500 times online. Si wrote on Weibo that the police would come to him soon after the phone call.

Ten minutes later, the police came, telling him that the restaurant owner reported the case and that they had to escort him to the restaurant. They said that they would ask relevant authorities to check on food quality. If the buns had a problem, the authorities would settle the matter with the school. If not, Si’ post would be handled as a defamation of the restaurant.

When they arrived at the restaurant, an university party leader was there waiting for Si. The restaurant owner took out the buns from the food draws and some had black spots on them. He said that they were caused by fermentation of yeast, not mold.

The university party leader then asked Si to delete the post and write a “clarification”.

I just went to the restaurant kitchen with school leader and restaurant owner. We saw that the black spots on the buns took out of the steamer were not mold. The chief explained that the black spots were caused by fermentation in winter – the yeast fails to dissolve in water. This is a misunderstanding and I apologize for the adverse consequence I bought to the school and to the restaurant.

According to Wang's report, the above message was read out loud by the school leader and sent out when they were still at the restaurant. Fifteen minutes later, the official Weibo of Lanzhou Finance University also published a post, clarifying that the black spots were caused by “Angel yeast”, not mold.

I published a Weibo around noon time today, caused misunderstanding about the black spots on the buns and ruined the ethnic restaurant’s reputation. Upon the investigation led by university principal Fu Deyin and comrade Zhang Guohong from Heping police station, also thanks to the open mindedness of the restaurant owner, I deleted the Weibo and will make public apology in coming days until reputation [of the authorities] were restored @Education Bureau of Gansu province @Gansu Food and Medicine Quality Monitor Bureau @Gansu Information @Lanzhou Information @Lanzhou Finance University.

10:46 PM Si published a 1500 word apology letter on Weibo, revealing details of the day. Attached to the post were images from a popular TV drama “Drawing Sword” which is a heroic story about the People's Liberation Army. The apology went viral online and criticism of the authorities poured in.

Dear friends, I appreciate your help but please do not repost my next apology, please do not repost it and do not comment. Do go to the university and education bureau’s Weibo to comment. You guys have fun commenting, but I will be buried. Please. My previous apology has been distorted by your comments, and its meaning is twisted. Really, I bet you not to say anything. [Crying face]

[Don’t repost and comment. Pls just bear witness that I am sincere in my apology] I am here to make a sincere apology. I really wrongly accused the restaurant. I wrote the apology by myself, no one forced me or compelled me to do so. I am genuine in correcting my mistake and clarifying the matter. But some internet mob came to my Weibo, the school’s Weibo and the education bureau’s Weibo, cursing me and the authorities. You guys have fun commenting, have you considered my feelings? Your dirty comments can have a very negative effect on me. Please don’t comment and report. I hope the school will accept my apology for my thoughtless behavior. I won’t talk about this anymore.

He deleted all his posts on Weibo that night and leave just one message behind:

Netizens have found other ways to participate in the incident. One of them carried an experiment using Angel yeast to make buns. Even if the yeast does not dissolve in the water fully, there aren’t any black spots.

More experts said that the most likely cause of the black spots indeed was mold.

On 21 November, the university, the restaurant and representative from “Angel Yeast” conducted another experiment at the school restaurant. This time, no bun had black spots. “Angel Yeast” published on its official Weibo a post stressing that the black spots were not caused by its products.

Thus far, there is no explanation of the cause of black spots on the buns. And Si is still missing from the online world.