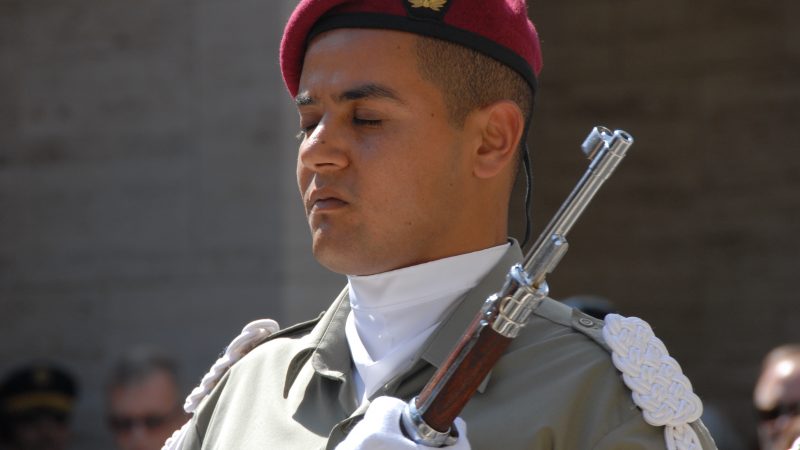 A Tunisian soldier closes his eyes in prayer during a May 31, 2010, Memorial Day ceremony at the North Africa American Cemetery and Memorial near Carthage, Tunis. Photo by US Army Africa, released to public domain.

Two Tunisian journalists are being prosecuted by the military, in separate trials, for their criticism of the country's armed forces and military institution. Rached Khiari, editor-in-chief of the online news site Essada, could face the death penalty if he is found guilty of “damaging the morale of the army to harm national defense.”

The trials mark the latest in a series of military prosecutions of bloggers and journalists that have taken place since the fall of the 23-year rule of Zine el Abidine Ben Ali.

On 16 November, a military prosecutor charged Rached Khiari with defamation, impugning the reputation of the army and undermining its morale under the code of the military justice and the Penal Code for a television appearance in which he spoke of the existence of an American military base on Tunisian soil. To support his allegations, Khiari cited a Washington Post article published on 26 October and his own “proofs”, though it is unclear what this referred to. Defense minister Farhat Horchani later denied these reports. On 22 November President Beji Caid Essebsi said that unarmed US drones were using the country's military bases to conduct surveillance operations over the Libyan border.

In another case, journalist Jamel Arfaoui is facing accusations of insulting the military over an article he published in the online newspaper Tunisie Telegraph. In the article published on 30 July, Arfaoui blamed a 14 July crash of a military helicopter, in which two soldiers lost their lives, on the ministry of national defense's mechanical maintenance decisions.

Both Khiari and Arfaoui are currently free, pending trial. If found guilty, they will most likely face harsh sentences — between three months to three years in jail for insulting the army under article 91 of the military justice code — despite the fact that they were peacefully exercising their right to free expression and doing their jobs. Khiari faces an additional two years in jail and a fine for defamation, and the death penalty for “damaging the morale of the army to harm national defense” under article 60 bis of the Penal Code.

Though they are both journalists, neither Khiari nor Arafoui are being prosecuted under the 2011 Press Code (decree 115 of 2 November 2011), which was adopted after the revolution to replace the repressive old code of 1975. In addition to guaranteeing “freedom of exchanging, publishing and receiving news and views of all kinds”, decree 115 abolished prison sentences against journalists in cases of defamation and slander. Yet a number of judges and prosecutors continue to bypass this law by charging and convicting journalists using repressive legislation that criminalizes the defamation of public officials and institutions.

On 29 September, Reporters Without Borders’ North Africa office tweeted about the case of Jamel Arfaoui:

No Free Speech in Front of Military Courts

Since the revolution that toppled dictator Ben Ali in January 2011, several journalists and bloggers stood trial before military courts for addressing matters related to the military institution or criticizing the leadership of the armed forces.

In 2012, a former advisor to then-president Moncef Marzouki was prosecuted before a military court for criticizing the role of the army and its chief of staff in the extradition of Baghdadi Mahmoudi, a Prime Minister under the rule of Gaddafi, to Libya.

In 2013, blogger Hakim Ghanmi was charged with insulting the army over a blogpost in which he criticized the administration of a military hospital.

In late 2014, blogger Yassine Ayari was imprisoned for “defaming the army” and “insulting military high command” through Facebook posts.

Since 2011, Tunisia has moved to introduce several democratic reforms, including an end to its internet censorship policies, the adoption of a constitution that guarantees fundamental rights and freedoms, and the establishment of an independent regulator for the broadcast media sector. However, laws allowing military courts to handle cases involving civilians continue to hold these reforms back.

On 26 October, 20 MPs submitted a bill (draft law No. 72 of 2016) to abolish the military trial of citizens in line with the 2014 constitution which guarantees the right to a fair a trial, and maintains that military tribunals are “exceptional courts that specializes in examining military crimes”. The bill proposes an amendment to article 91 of the military code to ban trials of civilians for committing “outrages against the flag or the army, offenses against the dignity, reputation or morale of the army, or acts to undermine military discipline, obedience and due respect to superiors or criticizes the action of military hierarchy or the military officers, offending their dignity.” Members of the military institution will, however, continue to be prosecuted under article 91. The free speech group ARTICLE 19 has previously recommended the “immediate repeal” of article 91 of the military justice code, as it is a “disproportionate restriction upon freedom of expression”.

It is not clear how much time it will take the parliament to debate and approve the amendment, but as Tunisia continues to fight terror threats, some journalists, bloggers and commentators may be reluctant to cross certain lines related to the military and security institutions. The targeting of journalists and bloggers by military courts will only increase self-censorship on these and other critical issues of public interest.