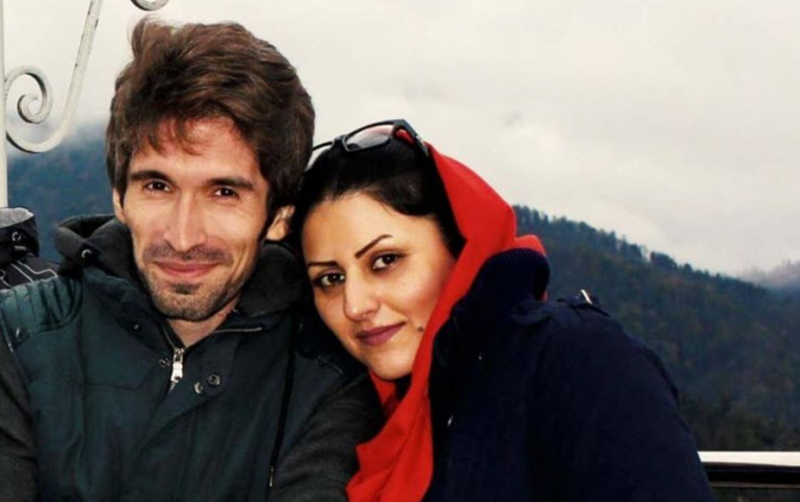 Arash Sadeghi and Golrokh Ebrahimi Iraee, together before his arrest. Photo shared widely on social media.

The campaign to save civil rights defender Arash Sadeghi has reached a critical point. Two months into his hunger strike, many worry Sadeghi's life is on the line in Iran's Evin prison.

Sadeghi has been on hunger strike for 67 days, starting four months into his prison sentence when his wife, Golrokh Ebrahimi Iraee was incarcerated on dubious grounds for the content of an unpublished work of fiction.

Sadeghi is serving a 15-year prison sentence on the charges of “assembly and collusion against national security,” “propaganda against the state,” “spreading lies in cyberspace,” and “insulting the founder of the Islamic Republic.”

In an interview with the International Campaign for Human Rights in Iran (ICHRI) last March, Sadeghi explained his arrest as such:

I was charged with ‘collusion against national security’ because I supported a group of poor students who had been denied education and for supporting leftist students and visiting families of those who had been killed, and for taking part in peaceful gatherings, such as… protests against the execution of Gholamreza Khosravi and gathering in support of [imprisoned women’s rights activist] Narges Mohammadi.

His wife was arrested on 24 October after officials broke into her house and arrested her for writing an unpublished fictional story about stonings in Iran. The story follows the emotional response of a young woman who watches the film The Stoning of Soraya, which tells the true story of a woman who was stoned to death for adultery. Her response includes burning a copy of the Qur'an. Authorities found the draft story when they arrested both Sadeghi and Iraee in 2014.

Stoning to death is a form of capital punishment in Iran, often used for women convicted of adultery. Iran's practice of stoning has become controversial both globally and inside Iran after it sparked outrage in 2010 in reaction to the high-profile case of Sakineh Mohammadi Ashtiani, a woman sentenced to death by stoning for adultery. Iran eventually bowed to the pressure and released Ashtiani in 2014.

In a conversation with ICHRI last October, Iraee explained:

My stories and poems were confiscated the night agents searched our home. After the third day of questioning, the interrogators put me under pressure and accused me of insulting the sacred. I was interrogated dozens of times about the burning of the Quran in my story. Each time I explained: it’s only a story. I told them and I wrote [in my defense statement] that if what I did was a crime, then many scriptwriters and novelists should be arrested for committing the same crime. But they didn’t care, and in the end they gave me the maximum punishment.

Photos of Sadeghi's worsening condition have been widely shared on social media under the hashtags #freeGolrokh, #freeArash, #saveArash.

Arash Sadeghi Is In “Critical And Worrying” Condition After 64 Days On Hunger Strike In Tehran’s Evin Prison #SaveArash pic.twitter.com/vnKj3qonfM

Appeals to Iranian authorities to react to Sadeghi's worsening condition have been widely shared on social media.